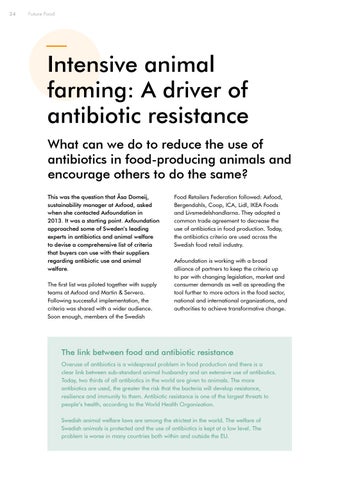 Intensive animal farming: A driver of antibiotic resistance What can we do to reduce the use of antibiotics in food-producing animals and encourage others to do the same? This was the question that Ă&amp;#x2026;sa Domeij, sustainability manager at Axfood, asked when she contacted Axfoundation in 2013. It was a starting point. Axfoundation approached some of Swedenâ&amp;#x20AC;&amp;#x2122;s leading experts in antibiotics and animal welfare to devise a comprehensive list of criteria that buyers can use with their suppliers regarding antibiotic use and animal welfare. The first list was piloted together with supply teams at Axfood and Martin &amp; Servera. Following successful implementation, the criteria was shared with a wider audience. Soon enough, members of the Swedish

Food Retailers Federation followed: Axfood, Bergendahls, Coop, ICA, Lidl, IKEA Foods and Livsmedelshandlarna. They adopted a common trade agreement to decrease the use of antibiotics in food production. Today, the antibiotics criteria are used across the Swedish food retail industry. Axfoundation is working with a broad alliance of partners to keep the criteria up to par with changing legislation, market and consumer demands as well as spreading the tool further to more actors in the food sector, national and international organizations, and authorities to achieve transformative change.

The link between food and antibiotic resistance Overuse of antibiotics is a widespread problem in food production and there is a clear link between sub-standard animal husbandry and an extensive use of antibiotics. Today, two thirds of all antibiotics in the world are given to animals. The more antibiotics are used, the greater the risk that the bacteria will develop resistance, resilience and immunity to them. Antibiotic resistance is one of the largest threats to peopleâ&amp;#x20AC;&amp;#x2122;s health, according to the World Health Organization. Swedish animal welfare laws are among the strictest in the world. The welfare of Swedish animals is protected and the use of antibiotics is kept at a low level. The problem is worse in many countries both within and outside the EU.