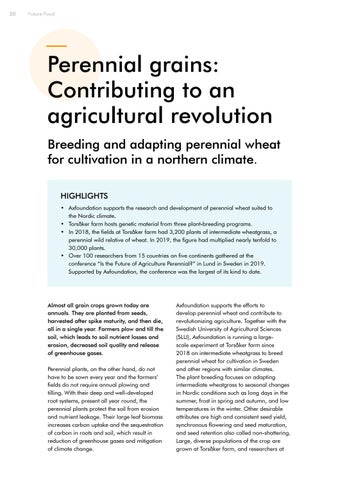 Perennial grains: Contributing to an agricultural revolution Breeding and adapting perennial wheat for cultivation in a northern climate. HIGHLIGHTS • Axfoundation supports the research and development of perennial wheat suited to the Nordic climate. • Torsåker farm hosts genetic material from three plant-breeding programs. • In 2018, the fields at Torsåker farm had 3,200 plants of intermediate wheatgrass, a perennial wild relative of wheat. In 2019, the figure had multiplied nearly tenfold to 30,000 plants. • Over 100 researchers from 15 countries on five continents gathered at the conference “Is the Future of Agriculture Perennial?” in Lund in Sweden in 2019. Supported by Axfoundation, the conference was the largest of its kind to date.

Almost all grain crops grown today are annuals. They are planted from seeds, harvested after spike maturity, and then die, all in a single year. Farmers plow and till the soil, which leads to soil nutrient losses and erosion, decreased soil quality and release of greenhouse gases. Perennial plants, on the other hand, do not have to be sown every year and the farmers’ fields do not require annual plowing and tilling. With their deep and well-developed root systems, present all year round, the perennial plants protect the soil from erosion and nutrient leakage. Their large leaf biomass increases carbon uptake and the sequestration of carbon in roots and soil, which result in reduction of greenhouse gases and mitigation of climate change.

Axfoundation supports the efforts to develop perennial wheat and contribute to revolutionizing agriculture. Together with the Swedish University of Agricultural Sciences (SLU), Axfoundation is running a largescale experiment at Torsåker farm since 2018 on intermediate wheatgrass to breed perennial wheat for cultivation in Sweden and other regions with similar climates. The plant breeding focuses on adapting intermediate wheatgrass to seasonal changes in Nordic conditions such as long days in the summer, frost in spring and autumn, and low temperatures in the winter. Other desirable attributes are high and consistent seed yield, synchronous flowering and seed maturation, and seed retention also called non-shattering. Large, diverse populations of the crop are grown at Torsåker farm, and researchers at