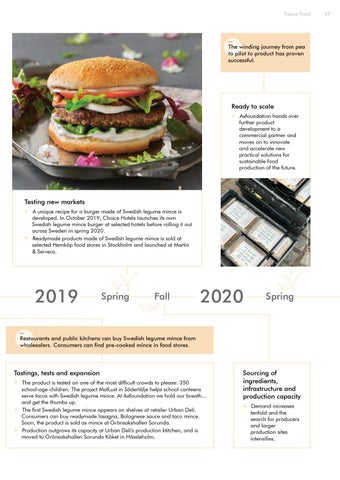 The winding journey from pea to pilot to product has proven successful.

Ready to scale • Axfoundation hands over further product development to a commercial partner and moves on to innovate and accelerate new practical solutions for sustainable food production of the future.

Tastings, tests and expansion • The product is tested on one of the most difficult crowds to please: 350 school-age children. The project MatLust in Södertälje helps school canteens serve tacos with Swedish legume mince. At Axfoundation we hold our breath… and get the thumbs up. • The first Swedish legume mince appears on shelves at retailer Urban Deli. Consumers can buy readymade lasagna, Bolognese sauce and taco mince. Soon, the product is sold as mince at Grönsakshallen Sorunda. • Production outgrows its capacity at Urban Deli&#39;s production ktitchen, and is moved to Grönsakshallen Sorunda Köket in Hässleholm.

Sourcing of ingredients, infrastructure and production capacity • Demand increases tenfold and the search for producers and larger production sites intensifies.