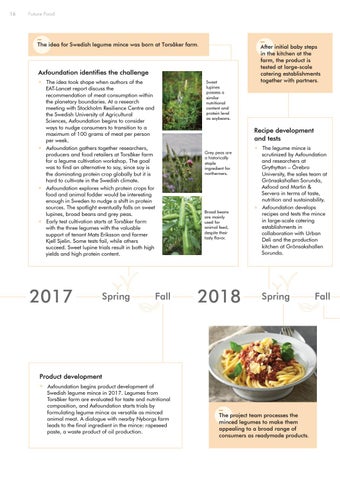 The idea for Swedish legume mince was born at Torsåker farm.

Axfoundation identifies the challenge • The idea took shape when authors of the EAT-Lancet report discuss the recommendation of meat consumption within the planetary boundaries. At a research meeting with Stockholm Resilience Centre and the Swedish University of Agricultural Sciences, Axfoundation begins to consider ways to nudge consumers to transition to a maximum of 100 grams of meat per person per week. • Axfoundation gathers together researchers, producers and food retailers at Torsåker farm for a legume cultivation workshop. The goal was to find an alternative to soy, since soy is the dominating protein crop globally but it is hard to cultivate in the Swedish climate. • Axfoundation explores which protein crops for food and animal fodder would be interesting enough in Sweden to nudge a shift in protein sources. The spotlight eventually falls on sweet lupines, broad beans and grey peas. • Early test cultivation starts at Torsåker farm with the three legumes with the valuable support of tenant Mats Eriksson and farmer Kjell Sjelin. Some tests fail, while others succeed. Sweet lupine trials result in both high yields and high protein content.

After initial baby steps in the kitchen at the farm, the product is tested at large-scale catering establishments together with partners.

Recipe development and tests Grey peas are a historically staple ingredient for northerners.

Broad beans are mainly used for animal feed, despite their tasty flavor.

• The legume mince is scrutinized by Axfoundation and researchers at Grythyttan – Örebro University, the sales team at Grönsakshallen Sorunda, Axfood and Martin &amp; Servera in terms of taste, nutrition and sustainability. • Axfoundation develops recipes and tests the mince in large-scale catering establishments in collaboration with Urban Deli and the production kitchen at Grönsakshallen Sorunda.

Product development • Axfoundation begins product development of Swedish legume mince in 2017. Legumes from Torsåker farm are evaluated for taste and nutritional composition, and Axfoundation starts trials by formulating legume mince as versatile as minced animal meat. A dialogue with nearby Nyborgs farm leads to the final ingredient in the mince: rapeseed paste, a waste product of oil production.

The project team processes the minced legumes to make them appealing to a broad range of consumers as readymade products.