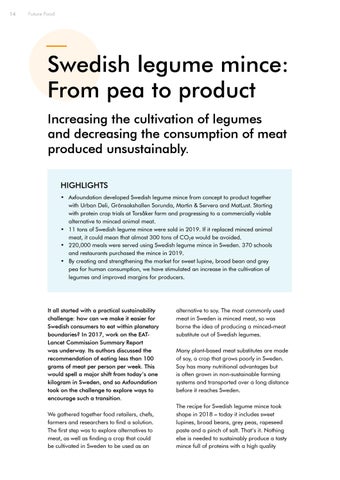 Swedish legume mince: From pea to product Increasing the cultivation of legumes and decreasing the consumption of meat produced unsustainably. HIGHLIGHTS • Axfoundation developed Swedish legume mince from concept to product together with Urban Deli, Grönsakshallen Sorunda, Martin &amp; Servera and MatLust. Starting with protein crop trials at Torsåker farm and progressing to a commercially viable alternative to minced animal meat. • 11 tons of Swedish legume mince were sold in 2019. If it replaced minced animal meat, it could mean that almost 300 tons of CO2e would be avoided. • 220,000 meals were served using Swedish legume mince in Sweden. 370 schools and restaurants purchased the mince in 2019. • By creating and strengthening the market for sweet lupine, broad bean and grey pea for human consumption, we have stimulated an increase in the cultivation of legumes and improved margins for producers.

It all started with a practical sustainability challenge: how can we make it easier for Swedish consumers to eat within planetary boundaries? In 2017, work on the EATLancet Commission Summary Report was underway. Its authors discussed the recommendation of eating less than 100 grams of meat per person per week. This would spell a major shift from today’s one kilogram in Sweden, and so Axfoundation took on the challenge to explore ways to encourage such a transition. We gathered together food retailers, chefs, farmers and researchers to find a solution. The first step was to explore alternatives to meat, as well as finding a crop that could be cultivated in Sweden to be used as an

alternative to soy. The most commonly used meat in Sweden is minced meat, so was borne the idea of producing a minced-meat substitute out of Swedish legumes. Many plant-based meat substitutes are made of soy, a crop that grows poorly in Sweden. Soy has many nutritional advantages but is often grown in non-sustainable farming systems and transported over a long distance before it reaches Sweden. The recipe for Swedish legume mince took shape in 2018 – today it includes sweet lupines, broad beans, grey peas, rapeseed paste and a pinch of salt. That’s it. Nothing else is needed to sustainably produce a tasty mince full of proteins with a high quality