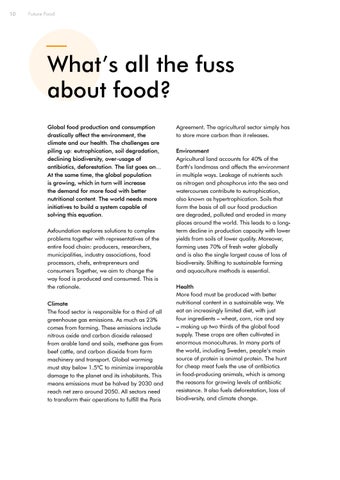 What’s all the fuss about food? Global food production and consumption drastically affect the environment, the climate and our health. The challenges are piling up: eutrophication, soil degradation, declining biodiversity, over-usage of antibiotics, deforestation. The list goes on... At the same time, the global population is growing, which in turn will increase the demand for more food with better nutritional content. The world needs more initiatives to build a system capable of solving this equation. Axfoundation explores solutions to complex problems together with representatives of the entire food chain: producers, researchers, municipalities, industry associations, food processors, chefs, entrepreneurs and consumers Together, we aim to change the way food is produced and consumed. This is the rationale. Climate The food sector is responsible for a third of all greenhouse gas emissions. As much as 23% comes from farming. These emissions include nitrous oxide and carbon dioxide released from arable land and soils, methane gas from beef cattle, and carbon dioxide from farm machinery and transport. Global warming must stay below 1.5°C to minimize irreparable damage to the planet and its inhabitants. This means emissions must be halved by 2030 and reach net zero around 2050. All sectors need to transform their operations to fulfill the Paris

Agreement. The agricultural sector simply has to store more carbon than it releases. Environment Agricultural land accounts for 40% of the Earth’s landmass and affects the environment in multiple ways. Leakage of nutrients such as nitrogen and phosphorus into the sea and watercourses contribute to eutrophication, also known as hypertrophication. Soils that form the basis of all our food production are degraded, polluted and eroded in many places around the world. This leads to a longterm decline in production capacity with lower yields from soils of lower quality. Moreover, farming uses 70% of fresh water globally and is also the single largest cause of loss of biodiversity. Shifting to sustainable farming and aquaculture methods is essential. Health More food must be produced with better nutritional content in a sustainable way. We eat an increasingly limited diet, with just four ingredients – wheat, corn, rice and soy – making up two thirds of the global food supply. These crops are often cultivated in enormous monocultures. In many parts of the world, including Sweden, people’s main source of protein is animal protein. The hunt for cheap meat fuels the use of antibiotics in food-producing animals, which is among the reasons for growing levels of antibiotic resistance. It also fuels deforestation, loss of biodiversity, and climate change.