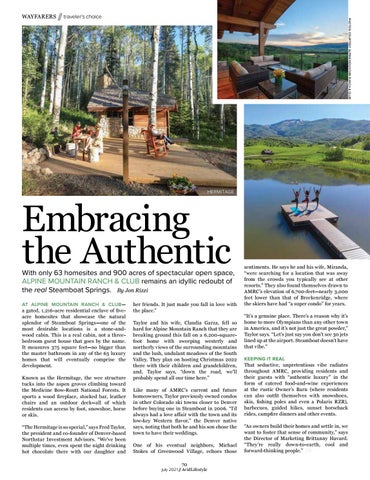 With only 63 homesites and 900 acres of spectacular open space, ALPINE MOUNTAIN RANCH &amp; CLUB remains an idyllic redoubt of the real Steamboat Springs. By Jon Rizzi AT ALPINE MOUNTAIN RANCH &amp; CLUB— a gated, 1,216-acre residential enclave of fiveacre homesites that showcase the natural splendor of Steamboat Springs—one of the most desirable locations is a stone-andwood cabin. This is a real cabin, not a threebedroom guest house that goes by the name. It measures 375 square feet—no bigger than the master bathroom in any of the 63 luxury homes that will eventually comprise the development. Known as the Hermitage, the wee structure tucks into the aspen groves climbing toward the Medicine Bow-Routt National Forests. It sports a wood fireplace, stocked bar, leather chairs and an outdoor deck—all of which residents can access by foot, snowshoe, horse or skis. “The Hermitage is so special,” says Fred Taylor, the president and co-founder of Denver-based Northstar Investment Advisors. “We’ve been multiple times, even spent the night drinking hot chocolate there with our daughter and

her friends. It just made you fall in love with the place.” Taylor and his wife, Claudia Garza, fell so hard for Alpine Mountain Ranch that they are breaking ground this fall on a 6,200-squarefoot home with sweeping westerly and northerly views of the surrounding mountains and the lush, undulant meadows of the South Valley. They plan on hosting Christmas 2022 there with their children and grandchildren, and, Taylor says, “down the road, we’ll probably spend all our time here.” Like many of AMRC’s current and future homeowners, Taylor previously owned condos in other Colorado ski towns closer to Denver before buying one in Steamboat in 2006. “I’d always had a love affair with the town and its low-key Western flavor,” the Denver native says, noting that both he and his son chose the town to have their weddings. One of his eventual neighbors, Michael Stokes of Greenwood Village, echoes those 70

sentiments. He says he and his wife, Miranda, “were searching for a location that was away from the crowds you typically see at other resorts.” They also found themselves drawn to AMRC’s elevation of 6,700-feet—nearly 3,000 feet lower than that of Breckenridge, where the skiers have had “a super condo” for years. “It’s a genuine place. There’s a reason why it’s home to more Olympians than any other town in America, and it’s not just the great powder,” Taylor says. “Let’s just say you don’t see 30 jets lined up at the airport. Steamboat doesn’t have that vibe.” KEEPING IT REAL That seductive, unpretentious vibe radiates throughout AMRC, providing residents and their guests with “authentic luxury” in the form of catered food-and-wine experiences at the rustic Owner’s Barn (where residents can also outfit themselves with snowshoes, skis, fishing poles and even a Polaris RZR), barbecues, guided hikes, sunset horseback rides, campfire dinners and other events. “As owners build their homes and settle in, we want to foster that sense of community,” says the Director of Marketing Brittanny Havard. “They’re really down-to-earth, cool and forward-thinking people.”

It’s pool party time! Event planner John Tobey creates splash-tastic summertime soirées and shares his go-to tips to get you party-ready. And take a look at a historic fishing camp with over a century of casting, community and campside stories. 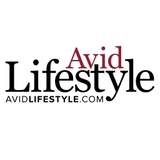