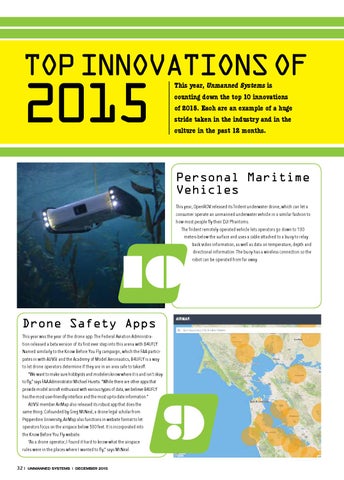 This year, Unmanned Systems is counting down the top 10 innovations of 2015. Each are an example of a huge stride taken in the industry and in the culture in the past 12 months.

Personal Maritime Vehicles This year, OpenROV released its Trident underwater drone, which can let a consumer operate an unmanned underwater vehicle in a similar fashion to how most people fly their DJI Phantoms. The Trident remotely operated vehicle lets operators go down to 100 meters below the surface and uses a cable attached to a buoy to relay back video information, as well as data on temperature, depth and directional information. The buoy has a wireless connection so the robot can be operated from far away.

Drone Safety Apps This year was the year of the drone app. The Federal Aviation Administration released a beta version of its first ever step into this arena with B4UFLY. Named similarly to the Know Before You Fly campaign, which the FAA participates in with AUVSI and the Academy of Model Aeronautics, B4UFLY is a way to let drone operators determine if they are in an area safe to takeoff. “We want to make sure hobbyists and modelers know where it is and isn’t okay to fly,” says FAA Administrator Michael Huerta. “While there are other apps that provide model aircraft enthusiast with various types of data, we believe B4UFLY has the most user-friendly interface and the most up-to-date information.” AUVSI member AirMap also released its robust app that does the same thing. Cofounded by Greg McNeal, a drone legal scholar from Pepperdine University, AirMap also functions in website format to let operators focus on the airspace below 500 feet. It is incorporated into the Know Before You Fly website. “As a drone operator, I found it hard to know what the airspace rules were in the places where I wanted to fly,” says McNeal.

Virginia Tech’s SAFFiR, or Shipboard Autonomous Firefighting Robot, demonstrated its humanoid firefighting abilities aboard decommissioned Navy vessel the USS Shadwell in February 2015. The 5-foot, 10-inch-tall robot that has a super-human range of motion was sponsored by the Office of Naval Research, which is seeking a robot for damage control and inspections on naval vessels. “We set out to build and demonstrate a humanoid capable of mobility aboard a ship, manipulating doors and fire hoses, and equipped with sensors to see and navigate through smoke,” says ONR program manager for human-robot interaction and cognitive neuroscience Dr. Thomas McKenna. “The long-term goal is to keep sailors from the danger of direct exposure.” The robot performs its tasks, like handling fire hoses, autonomously, but the tests were performed with a human in the loop to make sure someone could intervene. The goal for the future, however, is to have the robot work in stride with a person. “We’re working toward human-robot teams,” says McKenna. “It’s what we call the hybrid force: humans and robots working together.”

2. California Gov. Jerry Brown has vetoed many harmful drone bills this year, including one that could have stopped the end user industry in the state in its tracks. 3. The Know Before You Fly campaign gained many new supporters, and the education effort was even touted in a video by the San Francisco 49ers. 4. NASA honed its UAS Traffic Management cloudbased collision avoidance system for drones. 5. The University of Michigan opened Mcity, a research hub for self-driving and connected vehicles.

1. The FAA termed its drone sightings as “near misses” in a report it released on data collected through August.

1. The Academy of Model Aeronautics released a report denouncing many of the Federal Aviation Administration’s supposed “close call” drone sightings.

2. The FAA has yet to approve a rule for SUAS. 3. A runaway JLENS aerostat escaped from its base in Maryland and was eventually shot down over Pennsylvania. The mistake made the Army pull program funding, and the tether caused widespread power outages. 4. Despite a ban on flying drones within a five-mile radius of airports, many stores inside these establishments still sell the platforms. 5. Since SUAS operators need to have a sport pilot’s license, people have found loopholes to obtain them, like hot air ballooning. Many have pointed out the skill sets are far from what a drone operator would need.

Back in February, General Atomics Aeronautical Systems Inc. announced it successfully flight tested its Due Regard Radar, which would allow for air-to-air communication to ensure proper separation of manned and unmanned aircraft. The company’s tests were the culmination of four years of radar development. “DRR will allow users to operate Predator B independently in international airspace without the need for land-based, sea-based or off-board airborne airspace surveillance, offering our customers greater freedom of movement around the globe,” says Frank Pace, president of aircraft systems at GA-ASI. The radar integrates with the traffic alert and collision avoidance system that is used currently on most commercial aircraft.

Pepper In June, Aldebaran’s Pepper robot was commercially released, touted as the first emotional robot. Many have attempted to crack this market before, but Pepper was the first to succeed — the robot sold out in less than a minute in Japan. Still not available in the U.S., the platform was also released to the European market in 2015. The robot has primarily been used as a greeting system in SoftBank’s brick and mortar stores. Not everyone has taken kindly to the platform, with one angry — and drunk — bank customer kicking a Pepper and damaging it in September. A touch under four feet tall and weighing 61 pounds, the robot can evolve its emotional state based on people’s facial expressions and words. Pepper, which speaks English, French, Japanese and Spanish, can learn from its mistakes and collect more knowledge through cloud data.

The Federal Aviation Administration debuted the Pathfinder Program at AUVSI’s Unmanned Systems 2015 in May in Atlanta. The project ensures the agency will gain knowledge through UAS tests in areas that currently make the FAA uneasy — flights in urban settings, outside line of sight and well beyond line of sight. The FAA partnered with CNN for newsgathering flights over crowds, AUVSI member PrecisionHawk for outside-line-of-sight flights for agriculture data collection and BNSF Railway for beyond-line-of-sight rail inspection. “If the next big leaps in UAS innovation are going to occur inside the U.S., we need to lay the groundwork now for more expansive and transformational operations, including beyond line of sight,” said FAA Administrator Michael Huerta at the May announcement. In October, Insitu completed its first Pathfinder flights for BNSF Railway, covering 64 miles of a 132-mile stretch of tracks.

Internet Access Drones Facebook unveiled its plans this year to use its Aquila solar-powered drone as an Internet-delivery tool in remote parts of the world. The drone can fly for up to three months at a time and laser beams its data down to a ground station. â&#x20AC;&#x153;Our mission is to connect everybody in the world. This is going to be a great opportunity for us to motivate the industry to move faster on this technology,â&#x20AC;? said Jay Parikh, Facebookâ&#x20AC;&#x2122;s vice president of engineering. The company was mum on the exact details of the platform, but it has the wingspan of a Boeing 737 and would operate between 60,000 and 90,000 feet. Facebook has yet to confirm the plane has had its first flight, but when it released the news in June, it said it would fly before the end of the year.

Tesla Autopilot Though a lot of car companies and Google have timeframes for when they will debut a fully autonomous car, Tesla jumped into the game this year with its Autopilot system, which takes an incremental approach to integrating these sophisticated capabilities. It has a forward radar, forward-looking camera, 12 long-range ultrasonic sensors to sense 16 feet around the car in all directions and a high-precision braking system. The 7.0 version of the software was recently released for the Model S. This version can scan for parking spaces and digitally controls motors, brakes and steering to avoid collisions. The technology works so well, in fact, that Tesla has had to discourage its drivers from pulling stunts to test Autopilot themselves.

Delivery Drones In mid-July, the United States had its first ever legal drone delivery when a hexacopter was used to transport medicine in rural Virginia, to serve as a mobile clinic for people living in remote regions. Many very large companies have thrown their hats in the drone delivery ring, from Amazon to DHL, but in 2015, the concept went from publicity stunt to our definitive future. In early November, Google confirmed that it would start flying delivery drones in the U.S. as early as 2017, just one week after big box giant WalMart announced it would also get into the drone delivery game.

Just like DARPA has done in the past for driverless cars, this year the agency pushed the state of the art along for humanoid rescue robots. The June trials in California saw a global array of teams all striving to have their robot not only drive a vehicle, but open a door to get to an array of tasks that would take humans about 10 minutes to complete. Though it may seem like a long time, South Korea’s KAIST team had its robot DRC-HOBO nail all eight tasks in just under 45 minutes. “It’s been an astounding two days,” said DARPA Director Arati Prabhakar at the closing ceremony of the event. “Every single stumble we felt, it broke our hearts. Every success caused our spirits to soar.” Gill Pratt, the program manager for the competition who has since left DARPA, said researchers are only in the beginning of what needs to be done in the field of robotics. “What we have done is shown the world a little bit, just a tiny bit, of what is possible,” he said, also at the closing ceremony. “There’s so much more work to be done, I’m sure that all of you are doing to do a whole lot more of it in years to come, and you will remember this day as the beginning … and I cannot wait to see the work you do in the future,” Pratt said.