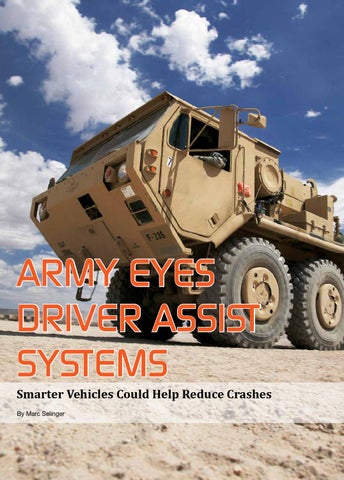 Concerned that too many soldiers are dying or getting injured in truck crashes, the U.S. Army and military vehicle makers are developing systems to help drivers avoid such accidents. Driving can be more dangerous than enemies on a battlefield. From 1980 to 2005, three soldiers died from motor vehicles crashes for each one killed in combat, according to the Army Corps of Engineers, one of several Army agencies developing driver-assist systems. “At home and in theater, vehicle accidents are a significant cost of lives,” the Corps of Engineers says on its website. “Many of these accidents are due to driver error and could be prevented.” The Army is drawing on technology from the automotive industry, which has been marketing such safety features to consumers for years. But the Army is doing extra development work to account for the uninviting conditions that its trucks often encounter. For instance, unlike civilian drivers, who generally deal with “structured environments,” such as paved roads, painted lines and traffic signs, military vehicles often lack such amenities and have to traverse dirt or gravel roads, trails and rolling terrain, says Bernard Theisen, technical manager at the Army Tank-Automotive Research, Development and Engineering Center (TARDEC) near Detroit. As a result, military systems have to be built with components that are more rugged than those for civilian vehicles, according to Andrew Culhane, business development manager at Virginia-based TORC Robotics. And to navigate “unstructured environments,” military systems need more sensors, such as lidar devices that create three-dimensional maps and extra computer processing to JUNE 2016 | UNMANNED SYSTEMS

generate “high-precision” positioning information using GPS satellite signals. “We’ve had rollover software on cars for a decade, and yet we have only one system out in the Army that has that same software,” says Bryan McVeigh, Army project manager for force projection, referring to Navistar Defense’s electronic stability controlequipped MaxxPro armored fighting vehicle. “So we’re a little bit behind the power curve.” uuu

equipped M915 tractor trucks, sometimes pulling flatbed trailers, the system displayed such functions as slowing or stopping its vehicle to avoid a collision with another vehicle or object, applying “steering corrections” to keep the vehicle from straying from its lane and blocking an intended lane change to prevent the vehicle from hitting another vehicle in its blind spot, says Tim Schulteis, AMAS program manager at Lockheed Martin Missiles and Fire Control. The demonstration also tried out the system’s driver warning functions, which simply alert the driver without actuating the vehicle’s braking or steering. Those functions include a mix of audible and dashboard warnings about potential collisions with other vehicles, other objects or pedestrians, Schulteis says. Schulteis called the demonstration successful, saying it showed that AMAS could save lives and reduce equipment losses.

“The positive soldier feedback we received reinforced our confidence that AMAS safety and autonomy capabilities are highly desired and poised to become pervasive across the military vehicle fleet,” he says. The same technology that allows AMAS to help drivers can also help perform several other functions, including leader/follower, in which several driverless trucks follow a manned vehicle in a convoy. Having fewer soldiers serve as drivers in a convoy could free them up for other duties, such as looking out for potential threats. “Convoy operations can be both tiring and stressful, so having a driverassist system that is capable of providing for the basic continued operation of the vehicle removes that stress from the soldier and allows them to be more vigilant of their surroundings,” Schulteis says. Lockheed Martin, which has been developing AMAS for several years,

A Humvee equipped with driver-assist technology undergoes testing on snow in New Hampshire.

plans to deliver “advanced” leader/ follower capabilities to the Army for testing in the latter half of 2016. A key improvement will involve getting the follower vehicles to trail the lead vehicle in a straighter line.

McVeigh says he hopes to receive approval by the end of fiscal year 2016 to begin developing an acquisition plan for leader/follower. If funding is available, a request for proposals could be released to industry in fiscal 2019.

In the meantime, the Army is considering whether to buy driver-assist systems. In November, the Army asked industry to provide information about active safety kits that could provide automated braking and steering for its Palletized Load System supply trucks. “Driver assist is a key technology to making leader/follower work,” McVeigh says. “Even if I don’t do leader/follower, those technologies, if integrated to platforms today, would

save lives, would save accidents and are a significant enhancement to what we have.” uuu

Anticipating increasing military interest in driver assist, Oshkosh Defense has developed the Advanced Driver Assist Systems kit to help drivers of tactical wheeled vehicles avoid accidents. ADAS is available in three versions, or “tiers.” Tier one uses a camerabased kit to warn drivers if they are in danger of hitting another vehicle or a pedestrian, or if they are driving too fast or veering out of their lane. Tier two adds electronic stability control, which helps drivers maintain vehicle control and avoid spinouts or rollovers on curves, slippery roads and emergency maneuvers. It also incorporates a forward-looking radar to maintain a safe distance from a

lead vehicle and to automatically slow a vehicle if a crash is imminent. Tier three combines tiers one and two. Another option, electronic power assist steering, eases the required steering effort to reduce driver fatigue. ADAS draws on the Wisconsin firm’s TerraMax unmanned ground vehicle technology. “Rather than viewing these ADAS tiered capabilities as a path toward autonomy, it actually kind of happened the other way, [as] we’ve been doing autonomy with TerraMax,” says John Bryant, senior vice president of defense programs at Oshkosh Defense. Oshkosh unveiled ADAS in October in Washington, D.C., and company officials report receiving positive feedback. “In our conversations with our government customers, there’s certainly a high interest in bringing a lot of this JUNE 2016 | UNMANNED SYSTEMS

Oshkosh received a TARDEC contract in December to develop the baseline architecture for a kit that includes ADAS, and that will be placed on a PLS truck. The kit is intended to be “fault tolerant,” meaning it will have “the ability to continue safe operations without driver intervention in the event of a component failure,” Bryant says.

The U.S. Army Cold Regions Research and Engineering Laboratory, part of the Army Corps of Engineers’ Engineering Research and Development Center, is exploring how thumb-sized digital cameras mounted on a vehicle could provide real-time information about the vehicle’s handling in snow, ice and mud. Its Advanced Driver Assistance System is in the “very early prototype stages,” CRREL says.

The Joint Light Tactical Vehicle, a new light truck that Oshkosh is building for the Army and Marine Corps, has “no discrete requirement” for an ADAS-like system, but such a system could be added in the future, Bryant says. “Those capabilities can be inserted into JLTV at relatively low cost,” Bryant adds. “Under our own internal research and development, we built the hooks in particularly for the ADAS system components.”

“Mobility over uncharted terrain is of extreme importance to move soldiers and equipment during any mission, but mobility under off-road conditions can change quickly with changes in weather,” the Corps of Engineers’ website explains. “Drivers of military vehicles often have little to no information about the terrain features in front of their vehicle tires. ADAS will provide real-time terrain data to the driver even in very rough terrain or low-visibility situations.”

Working with the University of Pretoria’s Vehicle Dynamics Group, which developed the technology and already had tested it in hot, dry weather, the Army lab tested the cameras on a Heavy Expanded Mobility Tactical Truck, a Humvee and a Jeep research vehicle in New Hampshire in February and March. High-speed video was sent to engineers sitting in the passenger seats, allowing them to see, for instance, whether tires were slipping on the terrain, says Sally Shoop, a research civil engineer at CRREL. The lab collected “lots of data” and plans to finish reviewing the information by late summer, after which it plans to share its findings with other defense agencies, including Army truck developers and users, Shoop says. If the technology is matured, it could help drivers adjust their speed or path. Such a system also could share its terrain data with other nearby forces so they “know what is happening elsewhere in the area,” she says. 

Driver Assist in the Military

Driver Assist in the Military