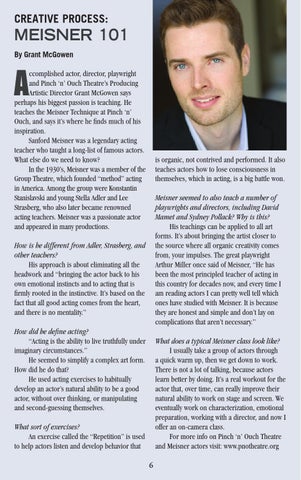 ccomplished actor, director, playwright and Pinch ‘n’ Ouch Theatre’s Producing Artistic Director Grant McGowen says perhaps his biggest passion is teaching. He teaches the Meisner Technique at Pinch ‘n’ Ouch, and says it’s where he finds much of his inspiration. Sanford Meisner was a legendary acting teacher who taught a long-list of famous actors. What else do we need to know? In the 1930’s, Meisner was a member of the Group Theatre, which founded “method” acting in America. Among the group were Konstantin Stanislavski and young Stella Adler and Lee Strasberg, who also later became renowned acting teachers. Meisner was a passionate actor and appeared in many productions.

is organic, not contrived and performed. It also teaches actors how to lose consciousness in themselves, which in acting, is a big battle won. Meisner seemed to also teach a number of playwrights and directors, including David Mamet and Sydney Pollack? Why is this? His teachings can be applied to all art forms. It’s about bringing the artist closer to the source where all organic creativity comes from, your impulses. The great playwright Arthur Miller once said of Meisner, “He has been the most principled teacher of acting in this country for decades now, and every time I am reading actors I can pretty well tell which ones have studied with Meisner. It is because they are honest and simple and don’t lay on complications that aren’t necessary.”

How is he different from Adler, Strasberg, and other teachers? His approach is about eliminating all the headwork and “bringing the actor back to his own emotional instincts and to acting that is firmly rooted in the instinctive. It’s based on the fact that all good acting comes from the heart, and there is no mentality.” How did he define acting? “Acting is the ability to live truthfully under imaginary circumstances.” He seemed to simplify a complex art form. How did he do that? He used acting exercises to habitually develop an actor’s natural ability to be a good actor, without over thinking, or manipulating and second-guessing themselves.

What does a typical Meisner class look like? I usually take a group of actors through a quick warm up, then we get down to work. There is not a lot of talking, because actors learn better by doing. It’s a real workout for the actor that, over time, can really improve their natural ability to work on stage and screen. We eventually work on characterization, emotional preparation, working with a director, and now I offer an on-camera class. For more info on Pinch ‘n’ Ouch Theatre and Meisner actors visit: www.pnotheatre.org

What sort of exercises? An exercise called the “Repetition” is used to help actors listen and develop behavior that 6 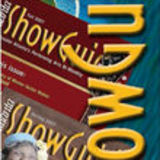