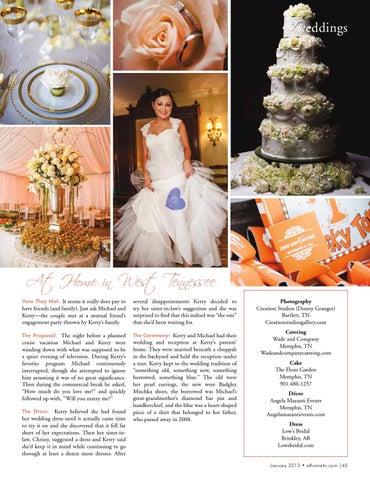 At Home in West Tennessee

How They Met: It seems it really does pay to have friends (and family). Just ask Michael and Kerry—the couple met at a mutual friend’s engagement party thrown by Kerry’s family.

several disappointments Kerry decided to try her sister-in-law’s suggestion and she was surprised to find that this indeed was “the one” that she’d been waiting for.

The Proposal: The night before a planned cruise vacation Michael and Kerry were winding down with what was supposed to be a quiet evening of television. During Kerry’s favorite program Michael continuously interrupted, though she attempted to ignore him assuming it was of no great significance. Then during the commercial break he asked, “How much do you love me?” and quickly followed up with, “Will you marry me?”

The Ceremony: Kerry and Michael had their wedding and reception at Kerry’s parents’ home. They were married beneath a chuppah in the backyard and held the reception under a tent. Kerry kept to the wedding tradition of “something old, something new, something borrowed, something blue.” The old were her pearl earrings, the new were Badgley Mischka shoes, the borrowed was Michael’s great-grandmother’s diamond bar pin and handkerchief, and the blue was a heart-shaped piece of a shirt that belonged to her father, who passed away in 2008.

The Dress: Kerry believed she had found her wedding dress until it actually came time to try it on and she discovered that it fell far short of her expectations. Then her sister-inlaw, Chrissy, suggested a dress and Kerry said she’d keep it in mind while continuing to go through at least a dozen more dresses. After 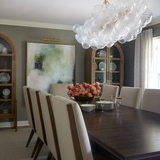