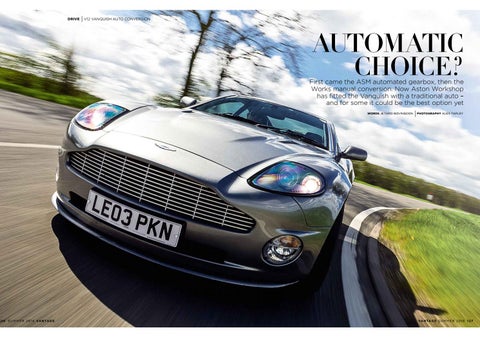 First came the ASM automated gearbox, then the Works manual conversion. Now Aston Workshop has fitted the Vanquish with a traditional auto â&#x20AC;&#x201C; and for some it could be the best option yet WORDS JETHRO BOVINGDON

think we can all agree that the original Vanquish is a fabulous car and a real landmark for Aston Martin. It featured a bonded aluminium chassis developed in conjunction with Lotus, which set the template for all future models. It utilised carbonfibre and other composites in the structure and crash boxes, further underlining Aston Martin’s new confidence to push the limits and look at innovative materials and technologies. The beautifully sculpted yet powerful styling also set a new aesthetic that’s endured to this day… In fact, I don’t think it’s been surpassed yet. It looks sensational and impossibly glamorous, even parked up beside a Little Chef in a nondescript service station, which is where I find this rather special Vanquish that’s been given a unique engineering twist by the guys at Aston Workshop. But if it’s so good, why re-engineer the Vanquish at all? The answer, as you may have guessed, is That Gearbox. The Vanquish was the first Aston to feature a robotised manual ’box operated by paddles mounted on the steering column. The ASM/SSM (Auto Shift Manual/ Select Shift Manual) system was relatively new tech, and early cars were pretty compromised. In auto mode the ’box was slow and unrefined, while manual operation required technique (a lift on upshifts) to smooth the changes and never felt particularly fast nor robust. Many a Vanquish clutch has been sacrificed on a quest to reverse-park on a slight incline.

There are those who really like ASM and there’s no question it was refined over the life cycle of Vanquish and Vanquish S, but there’s also a healthy demand for an alternative, as evidenced by the popularity of the Aston Martin Works manual gearbox conversion. We’ve tried that conversion ourselves (issue 7) and loved how it intensifies the Vanquish’s credentials as a drivers’ car but, for some, two pedals will always be preferable to three. Which is where this Aston Workshop conversion comes in. Once again it’s a Vanquish with ASM removed. But this time instead of just ditching the hydraulically-operated clutch system and gearshift actuators and leaving the original sixspeed unit in situ but with a good old-fashioned lever to operate it, there’s a modern, refined, sixspeed automatic gearbox. The conversion costs £18,500 plus VAT, takes three days and promises to create a more useable, accessible and intuitive driving experience. Jump into the car and everything is familiar. The lovely view over that rippling bonnet, interrupted by the incongruous and cheaplooking windscreen wipers. The sense you’re sat a little too high and that you’d like the chunky three-spoke steering wheel slightly closer. There’s no new gear-selector, the Aston Workshop system utilising the same controls and logic as a standard car. So simply twist the key, pull both paddles for neutral, press the red starter button and then smile when the 5.9-litre V12 erupts with that trademark barrel-chested growl. Pull the right paddle and roll away…

As promised, the Vanquish has hushed manners and the ratios slip quietly from one to the next. Richard Furse, Aston Workshop’s director of research and development, tells me how two customers on test drives were already completely sold on it by the time the ’box had slipped into third gear. I’m not quite at that point yet, but already I understand why those who drive their Vanquish mainly in urban environments might be. Just manoeuvring out of the car park and then punching out into a gap in traffic on a busy roundabout, this car feels so much more effortless. Basically, it requires no familiarisation or technique. I’m carefully assessing how smooth it is, noting the shift points and how engine and ’box interact because I’m here to review the conversion, but I suspect that if I wasn’t I wouldn’t give the ’box a second thought. I’d just jump in and drive. The conversion might appear seamless but a huge amount of work has been gone into it. The old Tremac T56 is removed and replaced by a GM-sourced 6L80 six-speed torque-converter auto. It’s not the most cutting edge of ’boxes compared with, say, the ZF eight-speed fitted to the latest Vanquish S, Rapide S and new DB11, but it’s strong, quick-shifting and commendably smooth. It was standard-issue in the previous generation Corvette and high-performance versions of the Camaro in the US and the Holden Commodore in Australia. More importantly, Aston Workshop, in conjunction with Gearbox Developments Limited, has been able to tune the ’box to its own requirements for

Left and below Auto conversion is integrated seamlessly, so you still use the original selector buttons on the centre stack and the paddle-shifters for manual gearchanges, just as you would with the original automated manual. Six-speed auto complements the original 5.9-litre 460bhp V12 beautfiully, too

‘This upgrade might allow you to fall back in love with one of Aston’s finest creations’ the Vanquish and can actually tweak the way the torque-converter locks up and the speed and intensity of the ’shift if the customer wants a harder-edged experience, for example. The ’box also retains the option of using the paddleshifters and, just like an ASM car, has an automatic rev-match function on downshifts. Aston Workshop will also offer the conversion as a plug-and-play kit compromised of a bellhousing, gearbox and torque converter, propshaft and a gearbox selector module to trusted specialists. We slip onto a dual carriageway and the ‘box continues to impress. The gearing is quite a bit shorter than standard, with first, second and third good for 40mph, 67mph and 103mph respectively, compared with the original’s 60mph, 89mph and 121mph. Don’t worry – in sixth it’s still just ticking over at a cruise (it’s still geared to 236mph in top, down from 250mph!). Go for kickdown and it drops from sixth to third decisively, the V12 crying out that steely howl. The Vanquish still has a lovely, unstoppable relentlessness to its delivery. Peeling off the main road and onto a well-trodden test route, I flick in a downshift, which simultaneously

ensures that the ’box is now locked in manual mode. The automatic conversion nails the GT stuff but does it blunt the focus of the Vanquish when you want it to behave like a sports car? The answer is, mostly, no. There are occasions when the torque-converter doesn’t lock up quite as quickly as you’d like (again, this can be tweaked) and there are rare moments when the 6L80 will clunk in a manually requested upshift, but for the most part it’s obedient and more than punchy enough to feel exciting. Automatic gearboxes have come an awful long way in recent times and this set-up does feel like a natural fit with the Vanquish’s indomitable V12. Smooth and quiet when you want it to disappear into the background and responsive enough when you want to feel the lovely flowing nature that characterises the Vanquish when you start to push it a bit harder. Is it better than the ASM/SSM system and the original Tremac T56 ’box? For me, yes. There is a certain satisfaction from mastering the standard car but it does date the Vanquish a bit too obviously and frustrates as often as it rewards. Is it as good as a brand new eight-speed ’box from a DB11, for example? No, but then it would

be unreasonable to expect that level of sophistication and eye-popping shift-speed. Does it make the Vanquish more useable, which was really the core motivation for Aston Workshop embarking on the two-year development of this conversion in the first place? Absolutely. If you have a Vanquish and you don’t get along with the standard ’box this is a really good upgrade and might allow you to fall back in love with one of Aston’s finest creations. That has to be a good thing. In fact, now that you can go for the driving purist’s option of a six-speed manual through Aston Works, tap into the Vanquish’s sublime GT ethos with this Aston Workshop auto conversion or simply stay true to the original concept and stick with ASM, there really is a Vanquish for everybody. What a fine world we live in. V First came the ASM automated gearbox, then the Works manual conversion. Now Aston Workshop has fitted the Vanquish with a traditional auto...

First came the ASM automated gearbox, then the Works manual conversion. Now Aston Workshop has fitted the Vanquish with a traditional auto...