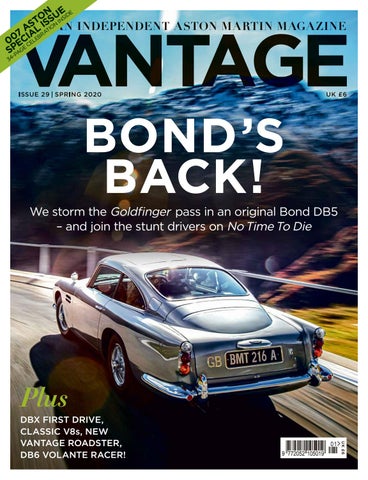 The Aston Workshop has developed a comprehensive package

of upgrades for the classic V8. We compare modiямБed with standard

Above and right Standard car is very much the soft-edged GT, from its plumply cushioned seats via its relaxed engine delivery to the way it pitches and rolls in corners (though this particular carâ&#x20AC;&#x2122;s rather tired damping accounts for some of the latter). Top right: standard meets upgraded on the North York Moors

ust 73 other Aston Martin V8 Series IIIs were produced in the year between these two examples being hand-assembled at Newport Pagnell. Four decades on, though, there’s a far bigger gulf between them – not only in terms of condition, but speciﬁcation, too. The car pictured on the left is a standard V8 Series III. Wearing chassis number 11570, it was completed in September 1977 and still retains the original-speciﬁcation 5.3-litre V8 and three-speed automatic transmission. It’s a representative car in need of a little TLC, the kind of V8 you might pick up for £65-70k. On ﬁrst acquaintance, our second car (chassis number J1497, built September 1976) might simply appear a very nicely restored example, a car that might command up to £140k in today’s market. That’s only part of the story, however, because not only has this Aston been treated to a comprehensive refresh, it’s also been sympathetically upgraded to create a safer, more comfortable and – the really crucial bit – better-driving kind of grand tourer. It’s the vision of Aston Workshop, the sales, maintenance and restoration business founded – and still owned – by Bob Fountain in 1988. Based in the Durham countryside, it’s a nearself-contained and hugely comprehensive business with on-site facilities catering for everything from engine assembly and crash repairs to upholstery and paintwork. The car we’re testing today on the North York Moors with its standard sibling has only recently been completed and showcases the company’s

Above Vantage-style front spoiler and slightly wider tyres on later-model BBS alloy wheels give the V8’s looks a subtle uplift. There’s nothing subtle about the uplift in performance though…

‘V8 Evolution 6.0’ package of upgrades. ‘Think of it as an evolved V8 developed from years of experience rebuilding and upgrading Astons with the latest hardware,’ suggests assistant workshop manager Neil Calvert. ‘You could make it more extreme, but this would be our ultimate road speciﬁcation.’ The project began when a long-standing customer asked for his V8 to be ‘sexed up’. His left-hand-drive car had ﬁrst been delivered to Japan (hence the ‘J’ preﬁx to the chassis number) before more recently residing at the present (British) owner’s Florida residence. It was in good nick when Aston Workshop performed an initial inspection. ‘The problem with these cars is usually rot anywhere that the alloy and steel meets,’ explains senior technician Keith Slater. ‘It can become so bad that you put them on a four-post lift and the doors won’t open, but this car was solid.’ Nonetheless, suspension, engine and interior were removed, with the bodyshell taken down to bare metal from its original Tankard Grey and the outer sills and harness carriers replaced. A respray in Cumberland Grey with an extra helping of metal ﬂake followed; it’s why it glints with a discreet bronze sparkle in the sunlight. Subtly tinted glass, later-model 15in BBS alloys wearing slightly wider 225/70 section tyres, and a deeper chin spoiler from the Vantage ﬁnish off the discreet exterior alterations. The original interior was also in good shape before work began, requiring only a dashboard retrim – it’s testament to the craftsmanship that it sits so seamlessly with the existing trim. The result is a V8 that looks more purposeful than the standard model – in a way you can’t initially quite pin down – without actually appearing modiﬁed. Lift the front-hinged bonnet and you might also take the V8 for a particularly well-presented original-spec motor. Actually it’s substantially reworked, and accounts for the most obvious transformation in this car’s character. Upgraded to a 6.0-litre capacity, it retains the original crankshaft and stroke, but beneﬁts from new pistons and an increased bore. The original quad carburettor set-up makes way for electronic fuel injection and individual Jenvey

throttle bodies, but because everything is so neatly hidden beneath the vast original air box, you could mistake it for a carburettor installation at a glance. The cylinder head is ported and polished, with the manifolds matched to the inlet tracts, and power is quoted at 430bhp, up from around 300bhp in the standard car. There’s also a new radiator with electronic fan control, and you might spot the air-con upgrade, too. The original three-speed auto transmission has been swapped for the Tremec T56 six-speed manual gearbox from the DB7, which combines with a custom propshaft and the original de Dion rear axle. ‘We removed the rear axle and fully refurbished it with new bearings and mountings,’ explains Calvert. ‘The diff cradle is a common weak-spot, so it’s been strengthened to deal with the extra power.’ Chassis and brake upgrades top off the package, with Spax coilovers and a thicker front anti-roll bar up front, while the factory leverarm dampers have been replaced with telescopic Spax units at the rear. Aston Workshop’s brake upgrade introduces six-piston billet aluminium calipers and grooved discs that not only improve stopping power but are said to reduce unsprung weight. I jump in the original car ﬁrst for context. The seats are relatively low-set with a satisfyingly

deep squish to the nicely patinated cushions, there’s a thin-rimmed three-spoke leather steering wheel, and a broad transmission tunnel that offsets the pedals on this right-hand-drive model to the right. The cabin feels very much designed for the US market, with a spacious, wide feel across the cabin – it’s a stretch to touch the passenger-side door card from the driver’s seat, even if you’re tall, and you almost expect a bench seat and column shifter. There’s an equally loungey feel to the drive. The auto transmission and power-assisted steering make light work of moving such a big, heavy car at low speeds, and the suspension has a soft, gentle lope. This relaxed, damped-down feel extends to the engine, which offers acceptable performance for the era, but serves it up in a rather monotone, muted manner, as though someone’s stuffed a pillow over its intake – you’d guess closer to 200bhp than the 300bhp or so quoted. Energy is partly sapped by the torque convertor and age no doubt, but also because this V8 had to contend with stricter US emissions regulations. By now, Aston had also swapped the mechanical fuel injection of earlier cars for Weber carbs, possibly because it was a more reliable system, thinks Calvert. It’s easy to imagine wealthy owners cruising along freeways with one hand on the wheel, but

as we weave along fast empty roads over the North York Moors, the sense is of steering that has only a gentle inﬂuence over the car’s trajectory, and a body that ﬂoats on the straights and rolls before taking a second to settle during cornering, with the front and rear ends dancing off in slightly different directions. The brakes top off the slushy feel with a soft pedal and distinctly leisurely stopping power. It’s worth noting that this original car’s suspension and steering would no doubt beneﬁt from a refresh, helping address some of the slop and slack, but there’s clearly scope to make not only a more focused driver’s car, but a more conﬁdence-inspiring one, too. That’s exactly what Aston Workshop has created with the V8 Evolution 6.0, and it’s the engine that initially grabs your attention. Turn the key and the V8 instantly bristles with extra energy – the body rocks when you blip the throttle, and there’s a likeably thunderous, angry if not OTT soundtrack, even with the standard twin exhausts. The V8’s new-found attitude translates to the road, with a surplus of performance and much perkier throttle response courtesy of the Jenvey throttle bodies and the more closely spaced six gear ratios. Acceleration is far more urgent, and makes this ‘classic’ V8 not just quick with a few caveats, but genuinely rapid full stop. The power delivery feels radically different, too, with rising drama as sound and speed and revs rush to a thrilling, ﬁzzy peak. It’s the V8 liberated from its period shackles, with far greater performance and a richer, more multidimensional personality than the standard car. Such a crowd-pleaser is the uprated engine that it’s easy to initially overlook some of the subtler upgrades, but they all contribute to a nicely integrated package. The new clutch pedal has a long travel, but its progressive biting point means stalling is an unlikely embarrassment, and the manual gearshift looks very much at home – it’s a bolt-in kit that requires no modiﬁcation to the Aston’s structure, just a new gear lever surround panel for a factory look inside. The shift action itself is quite a physical thing to hulk from ﬁrst to reverse (which is right across to the right of ﬁfth gear) and the 1st/2nd and 3rd/4th planes are close together, which takes acclimatisation and a certain delicacy. Get up and running, though, and the shifts are pleasingly short and direct, and do introduce a layer of interaction that’s sorely absent from the three-speed automatic. Power-assisted steering again makes this an easy car to manoeuvre, but at speed it quickly communicates how much tighter this V8’s chassis is, with slop dialled out, a shade more weight added in and a more precise connection to the front tyres. Partly that’s because everything has been refreshed, yes, but ﬁrmer spring rates and slightly wider tyres will also contribute to the more meaningful steering deﬁnition. Even before reaching a corner, the Aston feels less ponderous, but ease it in and there’s greatly

reduced body roll, better progression to how the remaining body roll is managed, enhanced grip, and the very welcome sensation that both ends of the car plan to travel in the same direction simultaneously. It’s also notable that the ﬁrmer set-up entails no real compromise – this remains a comfortable car to indulge a long-distance trip and still feels recognisably like a V8. In fact, it’s arguably more comfortable because it’s so much more composed. Most surprising is just how well the chassis copes with the extra power – it doesn’t squat excessively under full acceleration, and while it’s easier to adjust the car’s cornering attitude from the rear thanks to the abundant power and a super-responsive throttle, it’s not the overengined hot-rod you might expect. It certainly put its power down well during the dry conditions of our photo shoot. The brakes represent as big an improvement as the engine, with a far more robust response from the pedal and what feels a four-fold increase in stopping power – you do have to beware locking up the front tyres more than in the stock car. There’s rather too much slack at the top of the pedal as well as too large a gap between brake and throttle for heel-and-toe down-changes, but both could be adjusted to suit a customer’s wishes. Or you could opt for the six-speed auto conversion also available from Aston Workshop, and I do wonder if a modern slusher might better suit the V8’s GT character and likely use. That’s the beauty of an upgrade like this, though – nothing is set in stone, and you can pick and choose from Aston Workshop’s menu based on your budget, the work your donor car will require, how you’d like it to look, and how you’ll use it. Yet a car like this – one that appears so original but drives so much better – is a great way to demonstrate the art of the possible. V For more information, visit aston.co.uk Vantage Magazine take out two Aston Martin V8's out for a test on the North York Moors. One a standard V8 and the other, an Aston Workshop...

Vantage Magazine take out two Aston Martin V8's out for a test on the North York Moors. One a standard V8 and the other, an Aston Workshop...