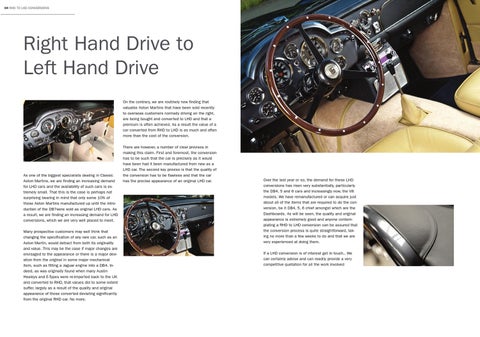 Right Hand Drive to Left Hand Drive On the contrary, we are routinely now finding that valuable Aston Martins that have been sold recently to overseas customers normally driving on the right, are being bought and converted to LHD and that a premium is often achieved. As a result the value of a car converted from RHD to LHD is as much and often more than the cost of the conversion.

As one of the biggest specialists dealing in Classic Aston Martins, we are finding an increasing demand for LHD cars and the availability of such cars is extremely small. That this is the case is perhaps not surprising bearing in mind that only some 10% of those Aston Martins manufactured up until the introduction of the DB7were sold as original LHD cars. As a result, we are finding an increasing demand for LHD conversions, which we are very well placed to meet. Many prospective customers may well think that changing the specification of any rare car, such as an Aston Martin, would detract from both its originality and value. This may be the case if major changes are envisaged to the appearance or there is a major deviation from the original in some major mechanical item, such as fitting a Jaguar engine into a DB4. Indeed, as was originally found when many Austin Healeys and E-Types were re-imported back to the UK and converted to RHD, that values did to some extent suffer, largely as a result of the quality and original appearance of those converted deviating significantly from the original RHD car. No more.

Over the last year or so, the demand for these LHD conversions has risen very substantially, particularly the DB4, 5 and 6 cars and increasingly now, the V8 models. We have remanufactured or can acquire just about all of the items that are required to do the conversion, be it DB4, 5, 6 chief amongst which are the Dashboards. As will be seen, the quality and original appearance is extremely good and anyone contemplating a RHD to LHD conversion can be assured that the conversion process is quite straightforward, taking no more than a few weeks to do and that we are very experienced at doing them. If a LHD conversion is of interest get in touch,. We can certainly advise and can readily provide a very competitive quotation for all the work involved