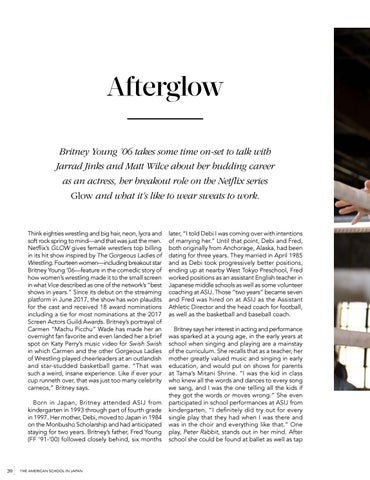 Afterglow Britney Young ’06 takes some time on-set to talk with Jarrad Jinks and Matt Wilce about her budding career as an actress, her breakout role on the Netflix series Glow and what it’s like to wear sweats to work.

Think eighties wrestling and big hair, neon, lycra and soft rock spring to mind—and that was just the men. Netflix’s GLOW gives female wrestlers top billing in its hit show inspired by The Gorgeous Ladies of Wrestling. Fourteen women—including breakout star Britney Young ’06—feature in the comedic story of how women’s wrestling made it to the small screen in what Vice described as one of the network’s “best shows in years.” Since its debut on the streaming platform in June 2017, the show has won plaudits for the cast and received 18 award nominations including a tie for most nominations at the 2017 Screen Actors Guild Awards. Britney’s portrayal of Carmen “Machu Picchu” Wade has made her an overnight fan favorite and even landed her a brief spot on Katy Perry’s music video for Swish Swish in which Carmen and the other Gorgeous Ladies of Wrestling played cheerleaders at an outlandish and star-studded basketball game. “That was such a weird, insane experience. Like if ever your cup runneth over, that was just too many celebrity cameos,” Britney says. Born in Japan, Britney attended ASIJ from kindergarten in 1993 through part of fourth grade in 1997. Her mother, Debi, moved to Japan in 1984 on the Monbusho Scholarship and had anticipated staying for two years. Britney’s father, Fred Young (FF ’91-’00) followed closely behind, six months

later, “I told Debi I was coming over with intentions of marrying her.” Until that point, Debi and Fred, both originally from Anchorage, Alaska, had been dating for three years. They married in April 1985 and as Debi took progressively better positions, ending up at nearby West Tokyo Preschool, Fred worked positions as an assistant English teacher in Japanese middle schools as well as some volunteer coaching at ASIJ. Those “two years” became seven and Fred was hired on at ASIJ as the Assistant Athletic Director and the head coach for football, as well as the basketball and baseball coach. Britney says her interest in acting and performance was sparked at a young age, in the early years at school when singing and playing are a mainstay of the curriculum. She recalls that as a teacher, her mother greatly valued music and singing in early education, and would put on shows for parents at Tama’s Mitani Shrine. “I was the kid in class who knew all the words and dances to every song we sang, and I was the one telling all the kids if they got the words or moves wrong.” She even participated in school performances at ASIJ from kindergarten, “I definitely did try out for every single play that they had when I was there and was in the choir and everything like that.” One play, Peter Rabbit, stands out in her mind. After school she could be found at ballet as well as tap 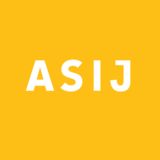