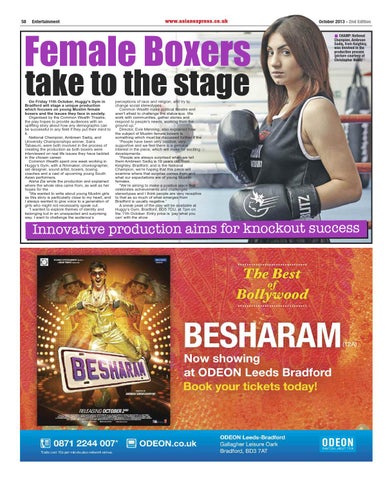 Female Boxers take to the stage

On Friday 11th October, Huggy’s Gym in Bradford will stage a unique production which focuses on young Muslim female boxers and the issues they face in society. Organised by the Common Wealth Theatre, the play hopes to provide audiences with an uplifting story about how any demographic can be successful in any field if they put their mind to it. National Champion, Ambreen Sadiq, and University Championships winner, Saira Tabasum, were both involved in the process of creating the production as both boxers were interviewed on real life issues they have tackled in the chosen career. Common Wealth spent one week working in Huggy’s Gym, with a filmmaker, choreographer, set designer, sound artist, boxers, boxing coaches and a cast of upcoming young South Asian performers. Aisha Zia wrote the production and explained where the whole idea came from, as well as her hopes for the “We wanted to write about young Muslim girls as this story is particularly close to my heart, and I always wanted to give voice to a generation of girls who might not necessarily speak out. “I wanted to explore themes of identity and belonging but in an unexpected and surprising way. I want to challenge the audience’s

perceptions of race and religion, and try to change social stereotypes. Common Wealth make political theatre and aren't afraid to challenge the status quo. We work with communities, gather stories and respond to people’s needs, working from the ground up.” Director, Evie Menning, also explained how the subject of Muslim female boxers is something which must be discussed further if the “People have been very positive, very supportive and we feel there is a genuine interest in the piece, which will make for exciting developments. “People are always surprised when we tell them Ambreen Sadiq is 19 years old, from Keighley, Bradford, and is the National Champion, we’re hoping that this piece will examine where that surprise comes from and what our expectations are of young Muslim females. “We’re aiming to make a positive piece that celebrates achievements and challenges stereotypes and I think people are very receptive to that as so much of what emerges from Bradford is usually negative.” A sneak peak of the play will be available at Huggy’s Gym, Bradford, BD5 7DU, at 7pm on the 11th October. Entry price is ‘pay what you can’ with the show