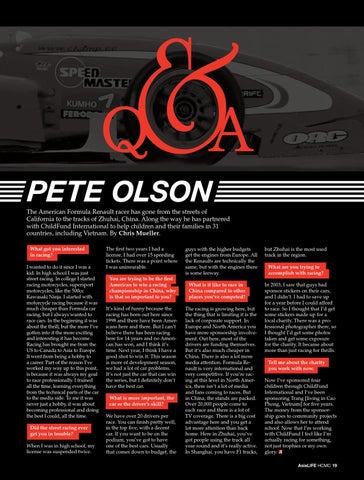 Pete Olson The American Formula Renault racer has gone from the streets of California to the tracks of Zhuhai, China. Along the way he has partnered with ChildFund International to help children and their families in 31 countries, including Vietnam. By Chris Mueller. What got you interested in racing? I wanted to do it since I was a kid. In high school I was just street racing. In college I started racing motorcycles, supersport motorcycles, like the 500cc Kawasaki Ninja. I started with motorcycle racing because it was much cheaper than Formula car racing, but I always wanted to race cars. In the beginning it was about the thrill, but the more I’ve gotten into it the more exciting and interesting it has become. Racing has brought me from the US to Canada to Asia to Europe. It went from being a hobby to a career. Part of the reason I’ve worked my way up to this point, is because it was always my goal to race professionally. I trained all the time, learning everything from the technical parts of the car to the media side. To me it was never just a hobby, it was about becoming professional and doing the best I could, all the time. Did the street racing ever get you in trouble? When I was in high school, my license was suspended twice.

The first two years I had a license, I had over 15 speeding tickets. There was a point where I was uninsurable. You are trying to be the first American to win a racing championship in China, why is that so important to you? It’s kind of funny because the racing has been out here since 1998 and there have been Americans here and there. But I can’t believe there has been racing here for 14 years and no American has won, and I think it’s time. Next year, I think I have a good shot to win it. This season is more of development season, we had a lot of car problems. It’s not just the car that can win the series, but I definitely don’t have the best car. What is more important, the car or the driver’s skill? We have over 20 drivers per race. You can finish pretty well, in the top five, with a decent car. If you want to be on the podium, you’ve got to have one of the best cars. Usually that comes down to budget, the

guys with the higher budgets get the engines from Europe. All the Renaults are technically the same, but with the engines there is some leeway. What is it like to race in China compared to other places you’ve competed? The racing is growing here, but the thing that is limiting it is the lack of corporate support. In Europe and North America you have more sponsorship involvement. Out here, most of the drivers are funding themselves. But it’s also much cheaper in China. There is also a lot more media attention. Formula Renault is very international and very competitive. If you’re racing at this level in North America, there isn’t a lot of media and fans coming to races. But in China, the stands are packed. Over 20,000 people come to each race and there is a lot of TV coverage. There is a big cost advantage here and you get a lot more attention than back home. Here in Zhuhai, you’ve got people using the track all year round and it’s really active. In Shanghai, you have F1 tracks,

but Zhuhai is the most used track in the region. What are you trying to accomplish with racing? In 2003, I saw that guys had sponsor stickers on their cars, and I didn’t. I had to save up for a year before I could afford to race. So I thought that I’d get some stickers made up for a local charity. There was a professional photographer there, so I thought I’d get some photos taken and get some exposure for the charity. It became about more than just racing for thrills. Tell me about the charity you work with now. Now I’ve sponsored four children through ChildFund International and I’ve been sponsoring Trang [living in Cao Phong, Vietnam] for five years. The money from the sponsorship goes to community projects and also allows her to attend school. Now that I’m working with ChildFund I feel like I’m actually racing for something, not just trophies or my own glory. asialife HCMC 19 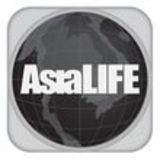