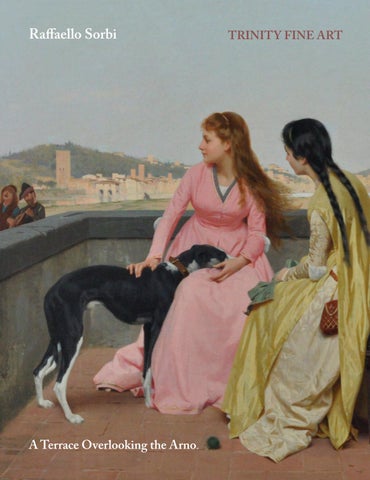 A Terrace Overlooking the Arno

his painting is fully entitled to its rightful place in Sorbi’s historical output, a genre which, in its various forms comprising revisitations of the ancient, medieval and Renaissance worlds, was a constant feature

of his career from the outset, when he entered his Savonarola Expounding on the Bible to Friends in the Convent of San Marco in 1863 and won a grant to study in Rome on the strength of the painting. He chose, however, not to take up the grant, preferring to stay in Florence in order to complete the Abduction of Piccarda Donati commissioned from him by King Victor Emmanuel II. Two years later (on 14 May 1865) the King was to unveil a statue of Dante in Piazza Santa Croce to commemorate the sixth centenary of the poet’s birth, an occasion that played a role in rekindling literary and artistic interest in the rediscovery of that period in Italian history. Sorbi’s considerable skill in interpreting the neo-medieval and neoRenaissance taste, on a par, for instance, with James Tissot’s historical painting in France, was perceptivaly highlighted by Telemaco Signorini a few years after the competition of 1863: “Sorbi is a born painter [...] His first work for the triennial

competition had old Florence believing that the miracles of 15th century art had been reborn [...] his was the best constructed organisation of art to be found in our country1”.

This work, dated 1874, is a product of the period when Sorbi was bound to the celebrated Paris merchant Goupil by a seven-year contract (from 1872 to 1879) designed to steer his output in the direction of the Anglo-French taste for the revisitation of genre themes in a historical setting. Inspired by the “troubadour” style with its idealised vision of the Middle Ages, the painting focuses on a romantic encounter between three young girls busy with their embroidery and two young beaux eager to serenade them. The romantic episode in the foreground is set against the backdrop of a landscape in deep perspective, evoking an ideal 14th century city with its towers in silhouette. The depiction achieves perfect harmony

thanks to the artist’s skilled use of the painter’s medium in selecting, calibrating and combining a vibrant and sumptous palette, and to his accurate rendering of

detail – almost to the point of hyper-realism in his handling of the figures’ attire. His mastery of neo-Renaissance taste reaches new heights in his description of the girls in the picture. He turns to the virginal beauty of the classic Florentine Madonna for his inspiration in defining the profile of the girl with tawny hair brought to life by a suddent twist of her head, combined with the graceful silhouette of her dog, an ancient symbol of loyalty and elegance. 7

The intimate, domestic charm of a medieval scene such as this, most probably set in the Piagentina neighbourhood just outside Florence, also reveals Sorbi’s interest in the Macchiaioli’s work. The Piagentina neighbourhood was a favourite with the Macchaioli in the 1860s as they sought lifelike themes in the familiar day-today surroundings of bourgeois residences in the countryside. Aside from the girls’ lighthearted and amusingly mischievous distraction by their would-be suitors, the painting echoes the much-meditated construction of a work such as Odoardo Borrani’s Early Produce (1868). The same perspective view of the city and river is also to be found in a work by Sorbi dated 1878 called Ring a Ring o’ Rosies, which appears to pander to the Anglophile Pre-Raphaelite taste. ❡❡❡ Raffaello Sorbi was born in Florence on 24 February 1844 and enrolled at the city’s Accademia at a very young age, studying there under Antonio Ciseri. He began his career very early with a historical painting depicting Corso Donati Mortally Wounded Carried by Monks of San Salvi to their Abbey (now in the Galleria dell’Accademia in Florence), which won him an award at the Triennale competition in 1861. Two years later he entered a competition and won a scholarship in Rome with a painting depicting Savonarola Expounding the Bible to Friends in the Convent of San Marco

but he chose to forgo both the prize and the stay in Rome, preferring to remain in his native city, which he only left on very few occasions in the course of his long and fruitful life. In fact many of his paintings are on Florentine themes, for example depicting the Abduction of Piccarda Donati from the Convent of Santa Chiara by her Brother Corso, commissioned from him by King Victor Emmanuel Il; Pietro Leopoldo I’s Courier, commissioned by Victor Emmanuel III; Leopold I in the Florentine Countyside Followed by His Guard of Honour, now in the Galleria d’Arte Moderna in Florence; and other genre scenes such as A Regatta on the Arno, The Merry-Go-Round, The Decameron, The Florentine Concert, The Songs of May and Dante’s Convalescence. In all of them he displays a remarkable respect for history and meticulously resconstructs his settings. In 1869 Sorbi was honoured with a visit from Giovanni Duprè, who commissioned him to paint Phidias in his Workshop, Carving the Statue of Minerva for the Parthenon. Sorbi produced a large number of paintings for the renowned Paris art dealer Goupil. His paintings include: Working in the Fields, owned by the Provincia di Firenze; Roman Idyll, shown in Florence in 1903; The Hunter; Part of a Wood; Sulla Moscia and The Plougman, shown at the 80th National Exhibition in Palazzo Pitti in 1927; St. Catherine of Siena Before an Angry Florentine Mob After Concluding Peace with the Pope, commissioned from him by the Marchese Carlo Torrigiani; and Imelda Lambertazzi and Bonifazio Geremei, sold to Wilhelm Metzler of Frankfurt . Much of his work is in private collections in Italy and in the United States, many of his paintings being owned by the Budini Gattai family of Florence.

Sorbi held numerous posts in the course of his career and was a member of several artistic acadamies and sodalities. He died in Florence on 19 December 1931.