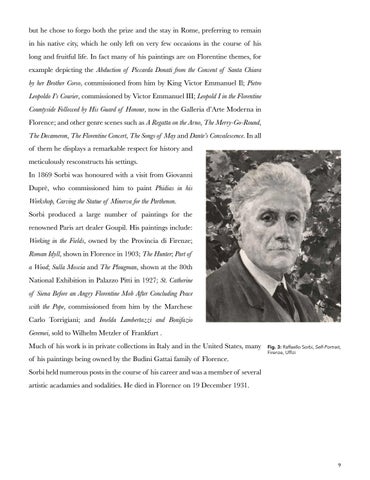 but he chose to forgo both the prize and the stay in Rome, preferring to remain in his native city, which he only left on very few occasions in the course of his long and fruitful life. In fact many of his paintings are on Florentine themes, for example depicting the Abduction of Piccarda Donati from the Convent of Santa Chiara by her Brother Corso, commissioned from him by King Victor Emmanuel Il; Pietro Leopoldo I’s Courier, commissioned by Victor Emmanuel III; Leopold I in the Florentine Countyside Followed by His Guard of Honour, now in the Galleria d’Arte Moderna in Florence; and other genre scenes such as A Regatta on the Arno, The Merry-Go-Round, The Decameron, The Florentine Concert, The Songs of May and Dante’s Convalescence. In all of them he displays a remarkable respect for history and meticulously resconstructs his settings. In 1869 Sorbi was honoured with a visit from Giovanni Duprè, who commissioned him to paint Phidias in his Workshop, Carving the Statue of Minerva for the Parthenon. Sorbi produced a large number of paintings for the renowned Paris art dealer Goupil. His paintings include: Working in the Fields, owned by the Provincia di Firenze; Roman Idyll, shown in Florence in 1903; The Hunter; Part of a Wood; Sulla Moscia and The Plougman, shown at the 80th National Exhibition in Palazzo Pitti in 1927; St. Catherine of Siena Before an Angry Florentine Mob After Concluding Peace with the Pope, commissioned from him by the Marchese Carlo Torrigiani; and Imelda Lambertazzi and Bonifazio Geremei, sold to Wilhelm Metzler of Frankfurt . Much of his work is in private collections in Italy and in the United States, many of his paintings being owned by the Budini Gattai family of Florence.

Sorbi held numerous posts in the course of his career and was a member of several artistic acadamies and sodalities. He died in Florence on 19 December 1931.