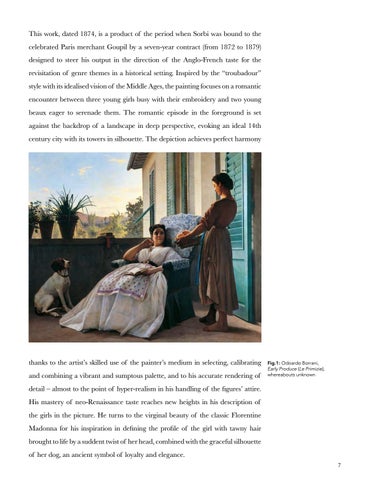 This work, dated 1874, is a product of the period when Sorbi was bound to the celebrated Paris merchant Goupil by a seven-year contract (from 1872 to 1879) designed to steer his output in the direction of the Anglo-French taste for the revisitation of genre themes in a historical setting. Inspired by the “troubadour” style with its idealised vision of the Middle Ages, the painting focuses on a romantic encounter between three young girls busy with their embroidery and two young beaux eager to serenade them. The romantic episode in the foreground is set against the backdrop of a landscape in deep perspective, evoking an ideal 14th century city with its towers in silhouette. The depiction achieves perfect harmony

thanks to the artist’s skilled use of the painter’s medium in selecting, calibrating and combining a vibrant and sumptous palette, and to his accurate rendering of

detail – almost to the point of hyper-realism in his handling of the figures’ attire. His mastery of neo-Renaissance taste reaches new heights in his description of the girls in the picture. He turns to the virginal beauty of the classic Florentine Madonna for his inspiration in defining the profile of the girl with tawny hair brought to life by a suddent twist of her head, combined with the graceful silhouette of her dog, an ancient symbol of loyalty and elegance. 7