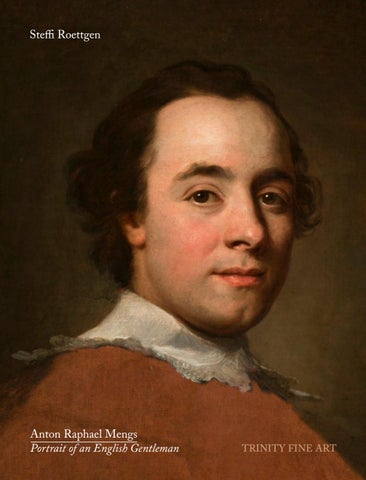 Provenance Radziwill family (according to a certificate issued by Galleria Heim Gairac on 4 November 1967; information supplied only verbally by the previous owner)

The painting under discussion in this paper1, and previously classed as “école anglaise du XVIIIe”, is beyond all doubt an autograph work by the hand of Anton Raphael Mengs, painted in the course of his third spell in Rome from 1752 to 1761. It has recently been claimed (see Provenance) that the painting was formerly owned by the Radziwill family, a leading Belarusian family of Polish-Lithuanian descent related to Europe’s nobility since the 18th century and various branches of which resided in Prussia during the 19th century. In

the absence of any detailed information regarding the family’s art collections, however, it is impossible either to confirm or to refute that provenance. The painting was considerably retouched, probably in the course of the 19th century, in an effort to conceal its unfinished state. The bust, in particular, was altered through wholesale repainting of the background and mantle in black, but recent cleaning has restored the painting’s wonderfully fresh spontaneity. This freshness and spontaneity are features shared by a small group of

unfinished portraits by Mengs which have recently resurfaced and which, following the removal of later repainting2 are fascinating precisely on account of their unfinished state, allowing scholars to draw interesting conclusions regarding Mengs’s workshop methods. The sculptural rendering of the face and complexion, conveyed with masterly

vibrancy, is almost complete, as is the background with the glow around the sitter’s head – a typical feature of Mengs’s work. These elements suggest that the canvas has maintained its original dimensions but that for reasons impossible to discover it was never completed. Unlike his oil studies from life – a fairly frequent category in the catalogue of Mengs’s portraits – the overall

composition is already well defined. The nearly complete state of the head and background compared to that of the bust allows us to surmise that it was intended to leave the missing portion of the portrait to an assistant to finish. This would also explain the rather unusual detail of a small portion of moiré steel-

grey drapery on the right-hand side of the picture, which may be interpreted as a message from the master to his assistant indicating the range of colours that he should use to finish the portrait. While only the white collar with its lace trimming was completed, we can readily make out the outline of the mantle sketched on the canvas beneath the “reddish-brown” layer3 of primer allowing us to identify the nature of the garment chosen for the portrait. No convincing hypothesis has yet been put forward, on the other hand, regarding the sitter’s identity. Despite his dark complexion, we may be certain that he is an English traveller because he is dressed “in the style of Van Dyck”, which was totally outmoded on the continent by this time yet still very much in fashion in the British Isles, a fact abundantly borne out by English portraiture of the period4. Given the picture’s unfinished state, it is highly likely to have come from the painter’s Roman estate, which was dispersed and sold on the antique market in the city after 1779. The inventory of Mengs’s estate lists several portraits of unnamed English sitters which have not yet been traced5. To form a picture of the kind of clothing here only sketched in, it is worthwhile looking at a portrait of John Viscount Garlies, later the 7th Earl of Galloway (fig. 1) signed and dated 17586. The collar is virtually identical, but so are the broad folds of the mantle covering the sitter’s shoulder and right arm, which was designed to be open at the chest in order to display the buttons of

the justaucorps. The face also lends itself to this comparison, while the halffigure bust with no hands suggests that, in this instance, the artist would be charging less for the work. Be that as it may, it is obvious that Mengs used the same prototype, a common practice adopted by northern European painters since the 17th century. Despite the differences in the two sitters’ features – the mouth, the marked dimple on the chin and the eyes – the sitter in our picture could almost be Garlies’ twin brother, a fact explained by the similarity of the two sitters’ pose and attire, thus also pointing to a similar date of c. 1758, the happiest and most fruitful period in Mengs’s career as a portrait artist during his time in Rome. The model in which Mengs sought his inspiration for this kind of portrait

was that of Sir Anthony van Dyck, a model extremely well-known in the 18th century thanks to the circulation of numerous editions of the “Iconographie”7, a posthumous publication containing a large number of portraits engraved by the Flemish master. Mengs was pointed in the direction of Van Dyck’s style

of portraiture by his father and master at the very start of his career, and

he continued to admire Van Dyck’s delicate taste and harmonious palette throughout his life8. 7

Following in the furrow of Van Dyck, particularly in his work as a portait artist, Mengs endeavoured to achieve a harmonious palette or, as he put it, “a balance in colours” between his sitters’ attire and their complexion, as he tells us in his treatise on Lezioni pratiche di Pittura [Practical Lessons in Painting]. Indeed, he explicitly addresses the issue in Reflection V on how to “[…] acommodate the colours of drapery to every kind of complexion9”. The main thrust of the text concerns the relationship between a sitter’s complexion – an unavoidable starting point, especially in portraits – and the colour of his or her accessories and attire: “Not all things must embarrass the spirit of the painter before he has examined the hue of the flesh on the person, whom he has to paint; but after that, he must have a care for those things which he cannot change, and over which he has no say; as for example black hair, or powdered hair, or wigs,

or the clothing of a colour which the sitter expressly desires10.” The very fact that this is an unfinished work makes it a singularly important addition to the catalogue of Mengs’s portraits, because it give us a glimpse of the workshop practice that he adopted while in Rome from 1752 to 1761 when, together with Pompeo Batoni, he was one of the most popular portrait artists with the English aristocrats conducting the Grand Tour. These grand tourists, whose cultural and artistic agenda would invariably include Rome, were often eager to have their portrait painted in the Eternal City. In fact it has even been suggested that the favourable rate of exchange between the shilling

and the scudo meant that portraits painted in Rome were a bargain compared to their English equivalent11. While Batoni was the more popular painter with the English on account of his mode of portrayal with the sitter in gaudy, opulent attire and often set against a backdrop of interiors with characteristic Roman elements12, a number of British grand tourists decided to have their portraits painted by both, while yet others opted solely for Mengs, who was known for his sobriety and for portraying his sitters in a darker, more discreet style of dress.