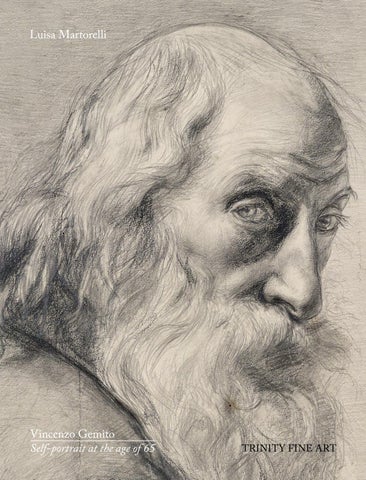 Vincenzo Gemito Self-portrait at the age of 65

his Self-portrait of Vincenzo Gemito, painted when he was 65 years of age, bears eloquent witness to the prolific moment in 20th century art when the Neapolitan sculptor

still played a very active role in the cultural life of the new century, albeit with a very different style from the past: a style that he had redirected towards expressive maturity in the fields of both sculpture and drawing, a style pervaded by a more incisive and altogether more modern, naturalistic sensitivity. By comparison with his 19th century drawings, which were influenced by the technique that he had picked up from his teacher Domenico Morelli, for whom pencil and ink jet were the tools one used for a sketch, for preparatory drawings prior to developing an idea for a sculpture, Gemito’s graphic repertoire in the 20th century was a different matter altogether. We can detect an authenticity in the independence of his draughtsmanship imbued with a psychological and symbolic significance so unique as to appeal to a vast audience of

Italian and international patrons who were eager to have Gemito paint their portraits because they recognised his originality among the great contemporary masters. After a long period of voluntary isolation stretching from 1887 to 1906, caused by a complaint that had upset his delicate psychic balance and prompted him to isolate himself deliberately in his home in Naples, like an enforced recluse without seeking any contact whatsoever with the outside world for nigh on eighteen years, Gemito

gradually recovered his self-confidence, returning to society life in 1907, and began to produce numerous drawings. A study of the figure of Alexander the Great became a magnificent obsession for his artistâ&#x20AC;&#x2122;s

imagination, underscoring his unflagging interest in the models of the ancient world, yet aside from this intrusion, the period of his return to social life was marked by his vast output of portraits and self-portaits.

By the years leading up to the tragedy of World War I, the cultural climate in Naples had changed. The ageing sculptor met Marinetti in the Naples home of engineer Achille Minozzi, his patron, and came face to face with the eccentricity of the Futurist evenings held at the Teatro Mercadante, getting to grips with the Futurist avant-garde and the first signs of the Secessionist movement, which were filtered in Naples through the first avant-garde events held in alternative venues

in the Chiaja neighbourhood, for example the II Esposizione giovanile d’arte della Città di Napoli, [City of Naples Second Youthful Art Exhibition] held in 1912, in which he showed his work as a guest invited by the young novices1.

By the time Gemito produced this Self-portrait, he was in Rome, where he lived from 1915 to 1917, attracted by the opportunity to study the old masters. He visited churches and museums, explored the Musei

Capitolini and the Galleria Borghese and copied the work of Lorenzo Lotto, Caravaggio, Raphael and Michelangelo. The date on the Self-portrait, 1917, is contemporary with a Portrait of Bice (fig. 1) published in Carlo Siviero’s monograph in 1953, in which we can perceive his original style in the unique charater of the young girl’s portrait on account of his choice of an unconventional pose, his search for authenticity of expression, his determination to produce a true likeness, the introspection of the sitter’s temperament and the way in which he underscores the outlines of her features combined with a firm, incisive handling of chiaroscuro. In those same years he produced a series of self-portraits “in old age” that mercilessly track the passage of time in his receding hairline, yet his eyes always hold the same deep and vibrant gaze which misses nothing. The beauty of that gaze is truly extraordinary in its diversity and uniqueness even when one can perceive the harshness marked by a clumsy expression due to the reflection in the mirror. The self-portraits are in pencil, in some cases retraced in charcoal, in others highlighted with white chalk or white lead, in others again coloured with tempera paints; some are of medium size, others, such as the one under discussion here, are large. Gemito occasionally portrays himself in the company of his recent sculptures, as for example in his Self-portrait with the sculpture of a mermaid (fig. 2), while at other times he depicts himself in an empty space shorn of all context, his gaze a little crazed but also ascetic on account of the long periods of fasting to which he subjected himself on those days when he was totally wrapped up in his work. His head inclines slightly to one side and his large light blue eyes stare so intensely at the spectator as to question him on the tribulations of life (fig. 3 and fig. 4)). 7

This reiterated narcissism expresses a self-celebratory power which becomes almost hypnotic if one stares at it long enough, embodying the physiognomical prototype of a genius from the past such as Leonardo or of a modern painter such as his friend Meissonier. In both cases he embodies the archetypical artist with long hair and flowing, unkempt beard. Gemito produced numerous self-portraits in the last fifteen years of his life. Of these, the Self-portrait that he painted in 1922 (fig. 5) was probably the one which Giorgio de Chirico saw at an exhibition in Milan in 1941. Belonging to the Consolazio collection, it struck de Chirico “with that ardent gaze reminiscent of an old beggar, his heart burning with passion” (Corriere Padano 1941, cited by D. M. Pagano, 2009, p. 145). In each self-portrait Gemito conveys the message of his tortured inner self, of his deepest fears and of his wish to convey the artist’s true creativity and the immortality of his thought with his own image. De Chirico’s brother Alberto Savinio said of him: “Gemito’s drawing have an accent, an eloquence, an effective way of scanning, of emphasising the draughtsman’s mark with which Impressionism had dispensed (…) Gemito’s drawings take us to a higher world, the only acceptable world. Before Fig 5: Self-portrait, seated, 1922, Mazzotta collection

Gemito’s drawings, the tedious definitions and distinctions abused by the critics – realistic or literary, human or illustrative – fall silent par force majeure. An artist of a superior calibre, Gemito possessed the gift of transfiguration. The clumsy figure of the Gypsy Woman (sepia drawing dated 1910) becomes a character in a tragedy. The peasant woman

(Woman of Genazzano) takes on the majesty of a goddess. She has been pierced by the breath of art. The mortal creature becomes immortal. Man acquires a grave and monumental aspect under Gemito’s pencil. Gemito was more of a sculptor in his drawings than in his statues. In his drawings he starts from a point, from one, from the intimate, and he draws it out into the infinite. His drawings carry on beyond the paper (…)”2

Vincenzo Gemito - Self-portrait at the age of 65: Trinity Fine Art

Vincenzo Gemito - Self-portrait at the age of 65: Trinity Fine Art