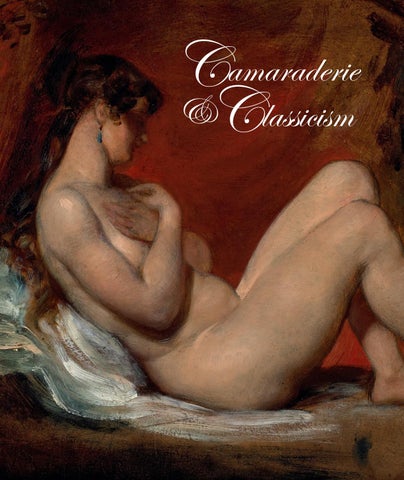 Camaraderie &amp; Classicism TOMAS SO B ROT HERS FINE A RT

10 joseph gott Hindu Girl Placing her Lamp upon the Ganges

16 joseph gott Boy with a Basket Playing with a Greyhound

joseph gott (1785–1860) and william etty r.a. (1787–1849) are considered to have been amongst the finest British artists working in the first half of the nineteenth century. Gott and Etty achieved international renown, but both had strong links to the English county of Yorkshire. Etty is perhaps York’s greatest artist-son, who did much to save its much-loved ancient city walls from destruction and retired there in 1848, while Gott’s most important patrons were the family and circle of his second cousin, the Leeds-based industrialist Benjamin Gott (1762–1840), who had made his fortune in the wool trade and became Mayor of the city in 1799. After moving to Rome in 1822, Joseph Gott became part of a vibrant British artistic community working in the city, which included eminent names such as Charles Eastlake (1793–1865), John Gibson (1790–1866), Richard James Wyatt (1795–1850), Seymour Kirkup (1788–1880) and Joseph Severn (1793–1879). These compatriots provided a vital support network for each other and there developed a strong camaraderie between them whilst in Italy. For example, Gott’s housemate, the painter Joseph Severn, wrote to his father that “Mrs Gott prepares all the Meals in the house and we all eat together – this is like being at home to me – we have an English pudding every day – this young Man has a very wonderful talent”.1 Etty and Gott were also clearly good friends, as Etty reveals in a letter to Sir Thomas Lawrence: … when I went to Naples – I rather wished Mr. Gott to accompany me as he seemed half inclined, however his anxiety to get on determined him to remain in Rome, as he had got up a model of Venus and Adonis, very beautiful (as well as some smaller sketches) with which he wishes to proceed; I thought he would have to see Naples some time, and he would by that means be away from Rome at a critical season, however, when I asked him for his final determination he declined it; he stayed in Rome, unfortunately, and caught the fever, and has been exceedingly ill,

and low in spirits occasionally in consequence. He is now, I am glad to say, very much better and has again commenced his group, for to add to his misfortunes, when he had got it in a very forward state – he, being ill, intrusted its removal to persons, who were recommended to him as capable of it, and they broke it all in pieces! He has it all in consequence to do all over again, and has some ideas of making some change in the subject, He begs me to offer you his most respectful remembrances and trusts you will excuse his not having written, as his illness has prevented him having that pleasure.2 Etty clearly took a great interest in the progress of Gott’s work and general well-being, proving this when he was recorded as one of the handful of artists, along with Kirkup, Eastlake and Pietro Camuccini, who visited him when he was struck by fever.3 Gott was to recover and his studio became a central attraction to English tourists, as his obituary in The Athenaeum made clear: “Every visitor to Rome, this half century past, has looked in at the studio of M.Gott …”.4 Gott and Etty most likely became acquainted whilst studying in London at the Royal Academy schools, with Gott entering in 1805 and Etty in 1808, each forging links with its enigmatic President, Sir Thomas Lawrence. Indeed, it was Lawrence who awarded Gott a pension for his travels in 1822, complete with a personal letter of introduction to Europe’s greatest living sculptor, Antonio Canova (1757–1822). Etty was himself apprenticed to Lawrence for a year on 2 July 1807 and, like Gott, later corresponded with him from Italy. The artistic practices of Gott and Etty had significant classical foundations. This took the form of a deep reverence for the finest examples of sculpture surviving from antiquity and the dedicated academic study of the male and female nude. Etty’s fervent devotion to the life class at the Royal Academy and later in his own studio is well known and his restlessness to capture the vitality of the human form from the live study of it never ceased. His desire to learn the lessons of antiquity is evident from the sketches he made in Rome around

1822 and earlier, in 1806, at Giovanni Battista Gianelli’s plaster-cast shop on Cock’s Lane, London. It was a preoccupation that Gott also shared, as Lawrence suggests in the letter of recommendation he wrote to Canova, requesting that the great Italian “perhaps extend to him your generous assistance in his study of any fine Works of Antiquity that may not be within the reach of common observations”.5 This activity was in accordance with the pedagogical Zeitgeist of the European academies and is not, in itself, extraordinary. However, what sets both artists apart from their peers at this time was the particular strain of classicism that they developed. Theirs was infused with a sensitivity, sensuality and a romanticism, not seen in the work of their compatriots in Rome, like Richard James Wyatt (1795–1850) and John Gibson (1790–1866), who, like many, had fallen under the spell of Canova and Thorvaldsen’s comparably austere, so-called ‘neo-Greek’ iteration of the Neoclassical idiom.6 Gott’s works concerned rather more heartwarming subjects than the deeds of otherworldly Olympians. They were often depictions of playful or loving children and animals, moulded by hand, mostly from humble clay, and made on a human, decidedly unheroic scale, which encouraged the delicate objects to be cradled and enjoyed at close quarters. The painter Thomas Unwins wrote glowingly of Gott’s talents to Lawrence from Naples in 1825: He is a man of first rate genius. His works have been distinguished by the most fertile invention; powerful conception of expression; a high feeling of the beauty of female form; a fine taste and correct judgement – and the whole mingled together by that quality peculiar to genius, which I think Lord Verulam calls ‘Felicity’ – everything he does seems a creation of his own mind. You do not think it beautiful because it is like this or like that amongst the admired works of other men and other ages but because it rises up before you in its own individual character, and appeals at once to the sympathies and associations common to humanity. Etty’s work was also markedly different from his Neoclassical forebears and he painted with a more Romantic abandon, inspired more by the bravura and

virtuosity of Old Master works by Titian, Tintoretto, Veronese and Rubens, composed of expressive brushstrokes and deft use of colour. The modish, restrained creation of pure, divine forms was rejected in favour of passion and a profane explosion of flesh. It is largely for this reason that William Etty’s paintings were highly controversial and divisive throughout his lifetime. Like some of the greatest works of Western art, they challenged contemporary tastes and social mores, even the very definition of what art was, or could be. Many critics were appalled by his painting’s flagrant display of the female nude and lambasted the sensuality in which his renderings of flesh were splashed across the canvas.8 Yet, within the artistic community of the period, his work was highly celebrated and he was elected a Royal Academician in 1828, ahead of the more polite and pastoral John Constable (1776–1837). The current exhibition is a seminal one, for there has never been a show dedicated exclusively to the work of these two artists, nor has the fact of their friendship been widely known until now. It is composed of beautiful small-scale terracottas and marble sculptures by Gott and deliciously sensual oil-paintings by Etty, most of which originate from the private collection of Dino and Raffaello Tomasso, having been been built up out of a great personal interest in the work of these two artists over many years.

Reclining Female Nude from Behind Oil on panel 16 cm (6¼ in.) high 39 cm (13½ in.) wide provenance Mr W.R. Earle, Shooters Hill, Woolwich, London, until 1880 Sold at White Challows sale, 11 March 1920 Possibly bought by J.M.M. Barnister(?), 73 New Cavendish Street, London inscribed (on verso): The “Etty” was guaranteed at the Sale of Mr W.R. Earle Shooters Hill Woolwich last July + I heard privately that Mr Earle paid £20 for it (he was a very clever artist) also say if I may … the other pictures … by Thursday in … yours …. Original of Etty’s belonging to W.R. Earle starter work Bought at the sale of Earles effects July 1880 On March 15th 1920 Mr J Bright Barnister [?] and myself Took this picture to Christies where it was unhesitatingly pronounced to be a genuine “Etty” probably one of the Studies made for his class, with … of Background quite probably touched in … by Some one else. On account of its poor condition, etc, not considered saleable by These, but we were referred to a shop in Bond St. who to Take it in for sale if wanted. Brought to W.C’s sale from 7…. Margaret with … Torquay 16. 3. 20 J.M.M. Barnister[?] 73 New Cavendish St to Bought at White Challows Sale 11. 3. 20

M. Postle and W. Vaughan, The Artist’s Model from Etty to Spencer, London, 1999

S. Redgrave and R. Redgrave, A Century of Painters of the English School with Critical Notices of their Works and an Account of the Progress of Art in England, 2 vols., London, 1866

A. Smith, The Victorian Nude: Sexuality, Morality and Art, Manchester and New York, 1996

Camaraderie &amp; Classicism TOMAS SO B ROT HERS FINE A RT