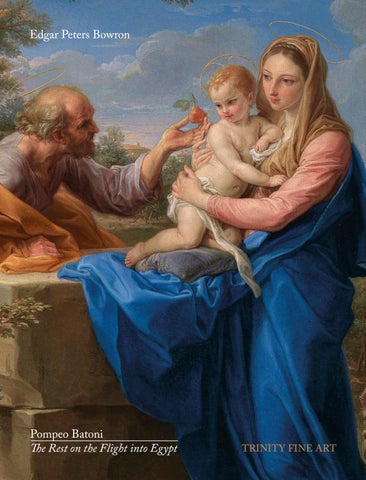 Pompeo Batoni The Rest on the Flight into Egypt

Signed with initials and dated on architectural fragment at lower left: p·b·1758·

Inscribed in a modern hand on the lining canvas on the reverse: pompeo batoni/ lucca 1702 – roma 1787

he Rest on the Flight into Egypt (Matt. 2: 13–15), a popular theme in the art of the Counter-Reformation, was depicted infrequently by Batoni, and this newly discovered canvas

is one of only two extant depictions of the subject by the artist.1

Here, the Virgin holds the young Jesus, who kneels on a cushion on a large block of stone suggestive of an altar that gives the composition more of a devotional than a narrative character. Saint Joseph offers an apple to the Child, which by tradition represents the Fall of Man and thus alludes to Christ’s future mission as Redeemer of mankind from Original Sin. (In view of the fact that the Child is no longer an infant but a small boy, the scene may plausibly be interpreted as depicting the Return from Egypt rather than the Flight into Egypt.) The family’s belongings, tied up in a bundle, and a saddle lie on the ground at the lower left, beneath a tree. At the right an angel cares for the donkey that traditionally carried the Virgin and Child on their

journey. A beautifully rendered landscape with a river and a variety of buildings in the distance provides a backdrop to the narrative scene in the foreground. The circular building in the background has not been identified, although it may derive from San Teodoro, the sixth-century

church at the foot of the Palatine Hill in Rome. Batoni evidently used the same structure, with minor variations, in a portrait of an Englishman on the Grand Tour, c. 1751 (figs. 3,4), thought to represent Philip Stanhope, son of the British statesman, diplomat, man of letters, and wit, the 4th Earl of Chesterfield, and in the Diana and Cupid in the Metropolitan Museum of Art, c. 1761 (figs. 5,6).2 The sacred figures of Jesus, Mary, and Joseph are characterized by a

meticulous naturalism that is the result of Batoni’s obsessive devotion

to drawing from the life model, a trait that is especially conspicuous in the works of the later 1750s. This may be observed in the handling of the figures’ anatomical details and draperies and the delicate and

Fig. 2: Pompeo Batoni, The Rest on the Flight into Egypt, private collection, currently on loan to the Museum of Fine Arts, Houston

observant treatment of the foliage in the foreground and middle ground at the left. There is a pronounced emphasis on features and accessories, such as the cushion on which the Child kneels and the saddle, staff, water flask, and architectural fragment at the lower left. The figure of Saint Joseph reflects a type of bearded old man, his 5

head that is familiar in Batoni’s work; for example, The Holy Family, Pinacoteca Capitolina, Rome (fig. 7),3 and that ultimately derives from the paintings of Guido Reni. Batoni’s other extant depiction of the subject is a painting of The Rest

Figs. 3,4: Pompeo Batoni, Portrait of an Englishman on the Grand Tour (thought to represent Philip Stanhope), with Lowell Libson & Jonny Yarker, with detail

the work exemplifies Batoni’s careful drawing, grace of handling, and

softness of color at this moment in his career, and the rocky prominence sheltering the principal figures is exceptionally beautifully rendered. The present painting of the Rest on the Flight, apart from its precise handling, meticulous detail, and luminous color, is distinguished also by the fact that it is one of the relatively few history paintings

produced by Batoni in the decade of the 1750s, a period during which his production of portraits of visitors to Rome on the Grand Tour, notably the British, far outnumbered his subject pictures—in fact, by a ratio of approximately four to one. Indeed, by the mid-1750s Batoni’s history paintings had risen in price to a degree that they were beyond the reach of all but the wealthiest visitors to Rome. Most of his late religious, mythological, and historical canvases were acquired by the great European sovereigns and princes, with the result that this aspect

of his development and art historical achievement is best appreciated in the public collections of Berlin, Vienna, St. Petersburg, and other eastern European cities. ❡❡❡ The Rest on the Flight was examined in 2019 by Simon Howell, Shepherd Conservation, London, using X-radiographs (fig.10) and infra-red reflectography (figs. 8,9) to investigate Batoni’s development of the composition. The under-drawing revealed in the features and

gestures of the figures, confidently describes the various forms using a smooth and sinuously drawn line. Both infra-red and X-radiography confirm that the composition was in large measure planned in advance and there is very little evidence of significant changes of mind or exploratory drawing on the painting. Some of the lines in the infrared photograph, such as those around Josephâ&#x20AC;&#x2122;s hand as he offers the

fruit, seem to be darker than the other drawing lines and this is where the sky has been painted up to the contours of the hand, leaving the

dark lower priming exposed. Noteworthy also is that there is a slight adjustment or pentiment of the Madonnaâ&#x20AC;&#x2122;s left hand, where her fingers and thumb have been reduced in length to more accurately describe the turn of her hand around Christâ&#x20AC;&#x2122;s hip (fig. 9). The almond-shaped 9

eyes of Mary and the Christ Child are strongly delineated and appear to contrast with that of Joseph. The back leg of the putto holding the reins of the donkey was originally painted in reserve and can be seen as a dark shape in the X-radiograph. In the infra-red analysis and in

Figs. 8, 9: Pompeo Batoni, The Rest on the Flight into Egypt, infra-red reflectography, with detail of the left hand of the Virgin

the final composition, the leg has been made wider and extended back to strengthen the figure’s stance. In the X-radiograph there is a lighter “halo” around the heads of the Virgin and Child, whereas in the final

image there is blue sky above them. This indicates that in the lower layers of paint, Batoni painted around the heads in lead white paint as a way to â&#x20AC;&#x153;frameâ&#x20AC;? and lend them greater luminosity.

In July and August 2019 the Rest on the Flight into Egypt was cleaned by Laura Amorosi and Veronica Balzani in Florence. The canvas had

Fig. 10: Pompeo Batoni, The Rest on the Flight into Egypt, X-Radiography

undergone previous restorations, during which it was relined and 13

badly restored along the edges using chalk mixed with glue and oil to cover various modest losses in a clumsy and excessive fashion. In addition, various retouchings covered much of the perimeter area and throughout the composition obscuring areas of original paint. Moreover, an ugly varnish dulled the color contrasts and made it difficult to read the bright and lustrous colors typical of Batoni’s palette. The work was cleaned by removing both the old varnish and the most recent retouchings using neutral, polar organic solvents. This phase of cleaning uncovered a very sound original paint layer, in spite of the various earlier restorations. The losses present in the perimeter area were repaired using chalk and glue, which were then textured in imitation of the adjoining original areas. The repairs were carefully retouched using tempera and watercolor. The original colors were largely recovered thanks to the careful removal of the repairs and retouching that covered large areas of the original paint; it is now in an excellent state of conservation despite the losses present in the perimeter area. ❡❡❡ Distinguished by its charming, idealized setting, refinement of draftsmanship, well-balanced composition, and brilliant coloring, the Rest on the Flight into Egypt both represents a striking new addition to Batoni’s oeuvre and affirms the importance and quality of his history paintings of the late 1750s.