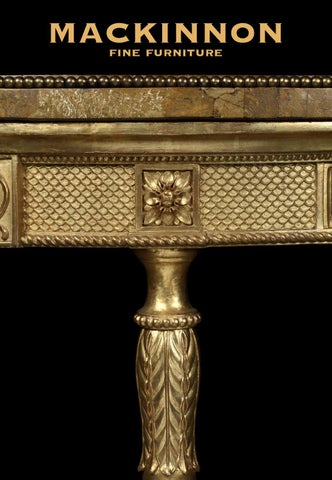 An outstanding pair of George III giltwood demi-lune pier tables in the neo-classical taste attributed to Thomas Chippendale. Each with a magnificent fossilized marble top with an ormolu beaded edge above a conforming frieze centred by a rectangular tablet carved with a flower-head flanked by honeysuckle, the frieze with a fish-scaled ground alternating with flower heads and fluted panels. Raised on acanthus-carved circular tapering fluted legs on toupee feet.

‘[the] young Earl, married to the most beautiful woman in the world, a Lord of the Bedchamber, a general officer, and with a great estate.’ –Horace Walpole

Herbert also served as Lord of the Bedchamber to George III, a prestigious position suited for a man of his standing. His wife, Elizabeth Spenser, served as Mistress of the Robes, the principal lady-in-waiting, to Queen Charlotte. The King and Queen came to stay with Herbert and his family at Wilton in 1778.

When he returned to England he began his military career as a Lieutenant-General in the Army. He soon became an expert on cavalry horses and remained an avid equestrian throughout his life. He authored the British Army’s manual on riding, Military Equitation: or a Method of Breaking Horses, and Teaching Soldiers to Ride, and he also built an indoor riding school at Wilton.

Herbert took great interest in art and architecture. He rebuilt the family’s London townhouse, Pembroke House, between 1756-59 with the guidance of William Chambers (17231796). He also turned his attention to both the architecture and gardens of Wilton, the family seat in Salisbury, and he once again commissioned Chambers for ‘Various designs for fitting up rooms.’ For the gardens at Wilton, Herbert consulted Lancelot ‘Capability’ Brown (1716-1783), one of the most famed landscape architects of his day.

Herbert was sent to fight in Germany in 1760 during the Seven Years War and achieved the rank of Major-General in 1761. He finished his illustrious military career as a General in 1782.

Wilton Wilton has been the country seat of the Earls of Pembroke for nearly 500 years. King Henry VIII presented Wilton Abbey and its estate to William Herbert, 1st Earl of Pembroke (15011570) in about 1544. Some believe that the 1st Earl brought in Hans Holbein the Younger (1497-1543) to re-design the abbey as a rectangular house centred around an inner courtyard. This design forms the core of the present structure. The great tower in the centre of east faĂ§ade with its impressive arch and three floors of oriel windows above recalls the entrance at Hampton Court. During the 1630s, Philip Herbert, 4th Earl of Pembroke (1584-1650) commissioned Inigo Jones (1573-1652) to build a new series of State Rooms in the Palladian style. Jones was close

with the Herbert family and it is thought that the 3rd Earl may have paid for Jonesâ&#x20AC;&#x2122; trip through Italy as he studied Andrea Palladio and classical architecture. The seven state rooms designed by Jones are some of the finest that survive today in English country houses. The celebrated Double Cube Room, which measures precisely sixty feet long, thirty feet wide, and thirty feet high, features paneled walls painted white and is decorated with gilded swags of foliage and fruit. The room is filled with magnificent furnishing by William Kent and Thomas Chippendale and outstanding portraits by Sir Anthony van Dyck. Wilton is considered one of the great stately homes of England, and is currently undergoing intensive award-winning restoration.

‘The Van Dycks glowing upon the walls of the double cube room, that enshrinement of architectural splendours.’ –Godfrey Winn, 1951

‘The Gallery… is most magnificently finished and gives one of the best Prospects of the Thames.’ –Vitruvius Britannicus

Pembroke House Pembroke House, the London residence of the Earls of Pembroke, occupied the site of the Queen’s riverside apartments in the old Palace of Whitehall, which was destroyed in the fire of 1698. In 1717, Henry Herbert, 9th Earl of Pembroke (1693-1750) acquired the site and commissioned Colin Campbell to design ‘a very good house, of 58 feet 4 inches in front & 36 feet 7 inches in depth.’ By 1756, the 10th Earl of Pembroke commissioned Sir William Chambers to build a new house on the site of a more substantial size. His Palladian design was a larger and grander version of the home that Campbell had designed earlier in the century.

Pembroke House is possibly depicted as the furthest house to the left in John Constable’s oil painting The Opening of Waterloo Bridge (circa 1831-32). The painting is now in the collection of Tate Britain. Pembroke House was demolished in 1938 and replaced by the Ministry of Defence. It is believed that once the Herbert family vacated Pembroke House for the last time, many of the contents would have inevitably been transferred to Wilton.

Thomas Chippendale In the introductory notes of The Gentleman & Cabinet-Maker’s Director, Thomas Chippendale (1718-1779) mentions only three patrons by name: the Earl of Dumfries, the Earl of Morton, and Henry Herbert, 10th Earl of Pembroke. He notes of Plate XLVI, ‘N.B. This Couch was made for an Alcove in Lord Pembroke’s House, at Whitehall.’ In total, Herbert spent £1,500 11s. with Chippendale between the years 1763 and 1773. A number of magnificent pieces by Chippendale, including the celebrated ‘Violin’ bookcase, remain at Wilton to this day. Chippendale introduced neo-classical motifs for the first time in the 3rd edition of his Director which was published in 1762. Unlike many of his peers, Chippendale did not embark on a Grand Tour himself, but he would have been familiar with the recent discoveries at Palmyra as recorded in Robert Wood and James Dawkin’s 1753 publication Ruins of Palmyra and might well

Pier table from Appuldurcombe, Isle of Wight of related design.

have seen some of the actual ruins brought back from Palmyra and put on display at Vauxhall Gardens in London in 1754. Chippendale is known to have worked closely with Robert Adam supplying furnishings to some of the most celebrated neo-classical interiors of the period. The legs of the present tables are nearly identical in form to those on a demi-lune pier table attributed to Thomas Chippendale that was supplied to Sir Richard Worsley for the drawing room at Appuldurcombe on the Isle of Wight in the late 1770s. These are recorded in the inventory as ‘2 circular slab frames car’d & gilt in burnish’d gold with tops neatly inlaid, diff’t colour’d woods.’ Both pairs of tables feature neo-classical motifs, including the central tablet, the tapered fluted legs with stylized acanthus leaves, and the carved paterae at the tops of the legs.

Fossilized Marble The fashion for using marble as table tops in England became popular during the 18th century. Travelers on the Grand Tour saw incredible marble in Italy and France and wanted to bring the precious material back home. Rare and beautiful marbles were highly sought after and often extremely expensive, and once back in England, patrons would commission leading craftsmen to create elaborate table bases to show them off.

One particularly prized and rare form was marble that contained fossilized remains. In these particular tops one can clearly see examples of prehistoric sea-creatures including shells, ammonites, and corals. The fossils in these marbles date back to the Silurian, Jurassic, and Cretaceous periods between 65 and 435 million years ago. The word fossil comes from the Latin word ‘dig’ and relates to the unearthing of these incredible prehistoric remains.

Although many marble tops at this time were imported from abroad, there were notable English quarries as well. A notice in the Gentleman's Magazine of 1738 announced that ‘the Lord Howth hath lately discovered a fine Marble Quarry on his estate at the Hill of Howth. It is finely variegated either with red, blue, yellow, and other colours, as any in Italy or Egypt.’

It is worth noting that the Pembroke family’s collection of marbles and antiquities from the ancient world was renowned for its depth and exceptional quality.

Mallett & Son (Antiques) Ltd. This magnificent pair of tables passed through the hands of Mallett & Son (Antiques) Ltd. twice in the 20th century. In both of the galleryâ&#x20AC;&#x2122;s seminal publications, Great English Furniture (1991) and Mallett Millennium (1999), the tables appear in the Bond Street showrooms amongst other exemplary pieces of English antique furniture.

A PAIR OF GILTWOOD CONSOLE TABLES

A PAIR OF GILTWOOD CONSOLE TABLES