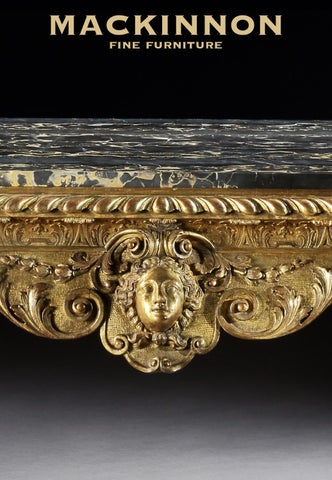 A George II Giltwood Table in the manner of william kent england, circa 1730

An exceptional George II carved giltwood table in the manner of William Kent. The table with a boldly gadrooned edge above a central mask flanked by scrolling acanthus leaves and trailing harebells, with swags of carved flowers, and standing on carved cabriole legs surmounted by superbly carved shells and stylised flowers and foliage which terminate in magnificent ball and claw feet, with a later Portoro Nero marble top. Height: 34½ in (88 cm) Width: 43¾ in (111 cm) Depth: 24¾ in (63 cm)

William Kent The table reflects the influence of William Kent (1685-1748), a leading architect and designer in early Georgian Britain responsible for introducing the Palladian style of architecture in England. Kent was born in Yorkshire and started his career as a sign and coach painter. He travelled with a group of young Yorkshire gentlemen on a Grand Tour in Rome and Florence for a decade from 1709 to 1719. During his travels, he met Thomas Coke, later 1st Earl of Leicester and Richard Boyle, 3rd Earl of Burlington. Upon returning to England, Kent began promoting the Palladian style, which was inspired by the Venetian architect Andrea Palladio (150880) and the classical architect Vitruvius. Together with Lord Burlington, Kent began designing buildings, furniture, and decoration in this revived classical style.

The present table’s incorporation of Palladian motifs, including the central mask and draped floral garlands, are features often found on Kent’s designs. A drawing by Kent in the Victoria &amp; Albert Museum shows his design for a side table at Houghton Hall, Norfolk, which was published in John Vardy’s Some Designs of Mr. Inigo Jones and Mr. William Kent (1744, pl. 41). This design features the prominent central carved mask and dramatic floral swags. The female mask framed by acanthus decoration appears frequently in Kent’s work. He designed a pair of tables for Lord Burlington at Chiswick House of pedestal form with a prominent central female mask flanked by acanthus scrolls and husk festoons. This motif refers back to Vitruvius’s story of the origin of the Corinthian capital and association of this architectural order with feminine qualities.

William Jones The present table also shares a close affinity to the designs of William Jones. Jones trained as a mathematician and tutored the young Earl of Macclesfield. He later served as surveyor and architect to the East India Company. In this role Jones was commissioned to design the Rotunda at the pleasure gardens in Ranelagh, Chelsea. Jones was the author of one of the earliest and most influential pattern books of architectural designs and furniture to be published in England. This publication, The Gentleman or Builder’s Companion, was first printed in 1739 and featured designs for tables, mirrors, and doors. There are several plates depicting ‘Frames to Tables’ in the publication that bear resemblance to the present table, but there is a particular

likeness with the design of Plate 28. This design includes the distinctive use of the carved female mask in conjunction with bold classical frieze. The design also incorporates elaborate swags of garlands between the central mask and the legs, which is repeated on the present table. While many of Jones’s table designs feature scrolled canted legs and feet, this particular design includes pronounced hairy paw feet, similar to the ones carved on the present table. This animalistic feature reflects a shift in design trends toward the end of the George II era as more dramatic motifs and rococo themes became popular.

The Picture Gallery at Temple Newsam showing the pair of the giltwood stands with lacquer cabinets on the righthand side.

Comparisons The stands for a pair of cabinets, on display at Temple Newsam, bear strong resemblance to overall design of the present table. It is thought that the cabinet stands were installed at Temple Newsam by the Honorable Charles Ingram (17271778) and his bride Frances Shepherd (17331807) after their marriage in 1758. The 1808 Temple Newsam Inventory records the cabinets as being in the Breakfast Parlour. Although there is no record of their original invoice, there is a charge of £9 on November 7

1758 to Richard Kerby, a cabinetmaker of Sackville Street, London for ‘New Gilding 2 Rich Carv’d frames for cabinets in the Best Burnish’d Gold.’ As with the present table, the stands of these cabinets similarly date to the 1730s. The construction of the Temple Newsam stands is notably different than the present table, which has a much sturdier frame to presumably allow for the weight of a substantial marble top.

The Earls of Lovelace Peter King, 1st Baron King (1669-1734) of Exeter, Devon had an illustrious legal career and served as Lord Chancellor from 1725 to 1733. He married Anne Seys, daughter of Richard Seys of Boverton, Glamorganshire in 1704 and purchased Ockham Park, Surrey, in 1710 to serve as the family seat. George I granted King the title 1st Lord King, Baron of Ockham in 1725. Successive generations of the family had acquired Ashley Combe and Meyners in Somerset and Yarty House in Devon by the early 19th century. William King-Noel, 8th Baron King (1805-1893), married August Ada Byron, the only legitimate daughter of the renowned poet George Byron, which brought the promise of vast estates in the Midlands. In 1838, King-Noel became the 1st Earl of Lovelace as part of the elevations made to celebrate the coronation of Queen Victoria.

King-Noelâ&amp;#x20AC;&amp;#x2122;s wife was a descendant of the Barons Lovelace of Hurley through her connection to the families of Byron, Milbanke, Noel, and Lovelace. In 1840, King-Noel bought the East Horsley Estate in Surrey along with a great deal of land and property in the surrounding area. The house was originally built in 1828 in the Tudor style by the famed architect Charles Barry (17951860) under the instruction of William Currie, a London banker. King-Noel refashioned the house in the Victorian Gothic style inspired by his time on the Grand Tour on the Continent. He also renamed the estate Horsley Towers after he incorporated a stuccoed tower and banqueting hall.