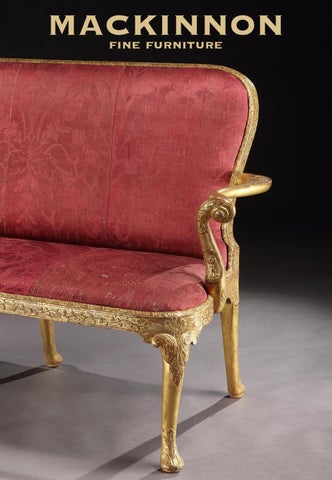 A George I Gilt Gesso Settee

A George I Gilt Gesso Settee attributed to james moore england, circa 1710-20

‘This settee… is one of the most unusual items of gesso furniture recorded.’ –C. Claxton Stevens &amp; S. Whittington

James Moore James Moore (c.1670-1726) was one of the most celebrated English cabinetmakers of the early eighteenth century. He entered into a partnership with John Gumley, a fellow English cabinetmaker renowned for his glass and mirror work. Together, Moore and Gumley received patronage from King George I in the royal household, carrying out a number of important commissions at Hampton Court and St James’s Palace. Moore is most notably remembered for his giltwood furniture. Some of his most impressive pieces remain in the Royal Collection today, including a magnificent gilt gesso table made for George I, which features Moore’s signature incised on the upper band of the table’s burnished gold border. In addition to his royal patronage, Moore received a number of notable commissions from influential patrons including the Duchess of Marlborough at Blenheim Palace, the Duke of

Montagu at Boughton, and the Earl of Burlington. The Duchess of Marlborough went as far as to refer to him as ‘my oracle, Mr. Moore… [who] certainly has very good sense and I think him very honest and understanding in many trades besides his own.’ At Boughton, Moore was commissioned by the 2nd Duke of Montagu to supply an extraordinary gilt gesso chest-on-stand. Sir William Bateman also commissioned an incredible sarcophagus-form chest similarly decorated in gilt gesso, now in the Victoria &amp; Albert Museum, the form of which was inspired by traditional 16th century Italian cassoni. Amongst the most extraordinary pieces attributed to Moore are the two pairs of gilt gesso bureau cabinets that were commissioned by the Portuguese Royal Court. Only two of these cabinets survive today, one of which was previously in the collection of Mackinnon Fine Furniture.

Gilt Gesso The particular style of decoration used to decorate the frame of this settee is known as gilt gesso. Gilding was more than just a decorative accent: it was a formidable statement of power, prestige, and undoubtedly, wealth. The art of gilding dates back to ancient Egypt and has been used extensively by almost every culture since antiquity. Gesso is a type of plaster that is prepared of finely ground chalk that is applied onto the wooden surface in a series of layers, requiring at least fifteen layers to achieve the desired thickness. Once dried, the craftsmen could cut into the new surface to create elaborate designs. When the designs were complete, the gilding could be applied. Furniture historian R.W. Symonds was quick to note that the quality of gesso was unparalleled: â&amp;#x20AC;&amp;#x2DC;It possessed a quality which no carving in wood could emulate.â&amp;#x20AC;&amp;#x2122;

To gild the surface, normally a red clay ground, known as bole, would be spread onto the surface to prepare for the laying of the gold leaf. The water gilding applied to these elaborate designs with its glistening burnished effect allowed the varied surfaces to resemble different materials, including solid gold. The style of decoration on gilt gesso pieces of this time, including strapwork and foliate designs, can be traced back to both Italy and France. The technique appeared in England at the end of the seventeenth century with the work of Jean Pelletier, a Huguenot craftsman who received royal patronage at Hampton Court and Kensington Palace. James Moore expanded on this technique with increased drama and exaggeration to the carving.

Gilt gesso settee from a larger suite of furniture believed to be made for Stowe, Buckinghamshire. Metropolitan Museum of Art. (previous overleaf) The saloon at Erddig, Wales showing part of the silvered suite of furniture.

Comparisons Given the expense and difficulty of the decorative style, gilt gesso furniture was rare and typically confined to smaller pieces of furniture, such as torcheres, tables, and mirrors. This gilt gesso settee is incredibly unusual and is one of only a handful of examples of settees known to be decorated in this lavish fashion. A famous suite of gilt gesso furniture comprised of at least eight side chairs, four settees, four stools, and two side tables is believed to have been made for Stowe, Buckinghamshire in the early 18th century. One of the settees is now in the collection of the Metropolitan Museum of Art while other pieces from the suite can be seen

at Windsor Castle, Upton House, Warwickshire, and Parham Park, Sussex. The settees are magnificently carved in gesso with punchwork grounds to highlight the contrast of the burnished strapwork and foliate decoration. John Meller of Erddig, Wales acquired a silvered suite of seat furniture consisting of a settee and eight chairs, all of which are upholstered in their original Spitalfields silk velvet. This set was recorded in the Withdrawing Room in 1726. The decoration of the setteeâ&amp;#x20AC;&amp;#x2122;s seat rail and design of the front legs share similarities in style and ornamentation with the present settee.

Comparisons A further comparison can be made between the present settee and a Queen Anne period settee carved and decorated with gilt gesso from Warwick Castle. By repute, it was originally commissioned by Queen Anne and later given by George III to Francis Greville, 1st Earl of Warwick to furnish the State Bedroom. This settee features five pierced tapered square legs with acanthus carved capitals and husks on a hatched ground, similar to the hatchwork found on the back of the present settee.

An impressive suite of Queen Anne gilded seat furniture comprised of at least six settees and eighteen chairs was illustrated in the 1919 Country Life article on Hamilton Palace, Scotland. H.A. Tipping describes the suite as ‘A gilt set comprised of some half-dozen settees and three times that number of chairs’ which have ‘a shell on the knee and below that a band of nulling.’

The Grosvenor House Art &amp; Antiques Fair The Grosvenor House Art &amp; Antiques Fair was founded in 1934 and became a highlight of the London art world each year until its closing in 2009. The art fair ran every June on the site of the former London residence of the Earls of Grosvenor, who had one of the finest private collections of art in England. Queen Mary accorded the Fair her patronage in 1937, making it the only fair with Royal patronage. The fair was renowned for the exceptional works of art and furniture offered by venerable London

and international dealers. Over the years the fair was home to one of Canalettoâ&amp;#x20AC;&amp;#x2122;s finest views of Venice offered by Moretti, a rare portrait of Elizabeth I as a teenager on the stand of Philip Mould, and an exceptional Thomas Tompion clock offered by Ronald Phillips. This exceptional settee was exhibited on the stand of Norman Adams in 1951. Queen Elizabeth, who was still Princess Elizabeth at the time, opened the fair that year.