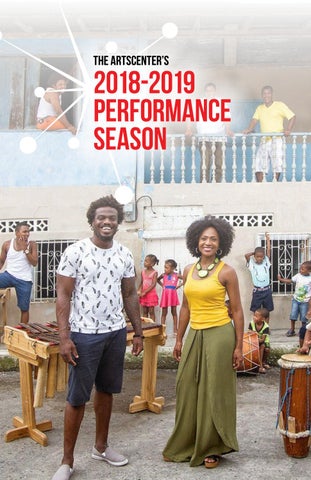 WELCOME Welcome to The ArtsCenter’s 2018-2019 Performance Season! As always, we bring you a mix of artists representing the best in Folk, Jazz, Bluegrass, International, Theater and Film. I’m often asked how we select artists to present at The ArtsCenter. The answer is that we are guided by two principles: artistic excellence and audience demand. We strive to present the highest caliber of artists in our intimate 350 seat venue and we are responsive to ways our community is changing and tastes are evolving. Some highlights for the coming year that I am looking forward to: • We’ve added more Jazz performances, including bringing Jazz Master Lee Konitz (October 6th) to our stage—Lee is a living legend and innovator who has played with Miles Davis, Gerry Mulligan and Chet Baker and many other great players of the 20th Century; • We’re bringing Theater back to our line-up, partnering with Full Nelson Playwrights Theater to present The Devil and Mark Twain (March 15-24th). We are also working with local theater company OdysseyStage Theater, who will be presenting PlaySlam (November 10th) and more new original works in 2019; • This is our third year of presenting a wide range of International artists including the great Gambian Kora player Sona Jobarteh (October 19th). We’ve also partnered with Southern Exposure, a national initiative that brings exemplary contemporary and traditional performing arts from Latin America to audiences across the United States, to bring Rio Mira from Columbia and Equador (October 13th) and La Patronal from Peru (March 29th) to our region for the first time ever. • I’m looking forward to Tim Carless presenting his original live scores to silent film classics Charlie Chaplin’s The Goldrush (April 13th) and Buster Keaton’s The General (October 27th) and a new discovery for me, the 1928 experimental film The Seashell and the Clergyman (January 19th). Join us for an afternoon or evening – or better yet for an entire season of performances from September to next April. Be sure to say hello and tell me how you like the show. See you at The ArtsCenter!

Become a Member and recieve a 15% discount off performances and classes, as well as special Members-Only promotions and updates. Find out first when your favorite artists are coming to The ArtsCenter and get exclusive early access to tickets! (Member discount may not be combined with other offers or discounts.) You can be a catalyst for education and excellence in the arts with your membership. Visit artscenterlive.org/support or call us at 919-929-2787 to become a member.

TICKET INFORMATION • All seating is General Admission, unless otherwise noted. • All sales are final, with the exclusion of a cancellation or reschedule. • Ticket fees and tax are not included in prices listed. • Ticket exchanges can be made for a $2 charge per ticket, up to 2 weeks prior to show date. ArtsCenter Members may exchange tickets for free. • Skip the line and purchase your print-at-home ticket at artscenterlive.org. • Performances are subject to change. Whenever possible, you will be notified and offered a ticket exchange or refund. • If you cannot print or have lost your ticket, we can print your ticket at the box office. • Several pay and free parking lots are available within a few blocks of The ArtsCenter. Please visit www.artscenterlive.org for a map of parking lot locations. • The ArtsCenter strives to make its facility accessible to all patrons. Wheelchair accessibility is available for all performances. Please call our Box Office at 919-929-2787 for specific accomodations.

AUSTIN PIAZZOLLA QUINTET Since 2009 the APQ has built a reputation as one of North America’s leading interpreters of the Argentine tango tradition, through unique arrangements of Astor Piazzolla’s groundbreaking works, breathtaking original compositions, and fiery improvisation.

LEO KOTTKE Acoustic guitar legend Leo Kottke was born in Athens, Georgia, raised in 12 different states, and flirted with both violin and trombone before settling on the guitar. After his discharge from the Navy in 1964, Kottke relocated to the Twin Cities and became a fixture at the Scholar Coffeehouse, home to Bob Dylan and John Koerner, releasing his debut LP Twelve String Blues. Several celebrated albums and two Grammy nominations later, Kottke continues to delight audiences the world over with his dexterous finger-style playing and wry storytelling.

LEE KONITZ QUARTET Legendary saxophonist and 2009 NEA Jazz Master Lee Konitz brings his quartet to The ArtsCenter for a rare North Carolina appearance. Since defining the “West Coast Cool” sound in his work with Miles Davis, Lennie Tristano, and Stan Kenton, Lee Konitz has spent more than a half-century refining his interpretations of the Great American Songbook. At 90 years old, he remains one of the most original and innovative voices in jazz, making this show a must-see for anyone invested in the past, present, and future of the art of jazz improvisation.

“Lee is a master. The master is not looking for anything. The master already has found everything. It’s just a question of revealing it to you.” ­— Paul Bley

GREG HAWKS Greg Hawks’s three-decade-long career has found the critically-acclaimed songwriter, front man, and multi-instrumentalist leaving his mark on everything from alt-country to bluegrass music. On his new album I Think It’s Time, Hawks draws inspiration from classic country, 1970’s pop-rock, rhythmic Stax Records soul, and his own roots in the American South.

Marimba, percussion, and vocals form the compelling sound of South American supergroup Rio Mira. Their exploration of the cultural heritage of people of African descent in the Colombian South Pacific region and Esmeraldas Province of Ecuador creates a mesmerizing performance that is both 8:00 PM contemporary and unique, moving from call-and response vocal refrains to densely melodic dance numbers. Their most recent album, Marimba Del Pacifico, is comprised of five songs each from Colombia and Ecuador, demonstrating TICKETS $28 both the international nature of the project and the diversiINTL ty of the cultural heritage they represent. Presented in collaboration with the Carolina Theatre.

Sona Jobarteh is a pioneer in the ancient male-dominated hereditary Griot tradition, a tradition that has been exclusively handed down from father to son for the past seven centuries. Jobarteh defies convention as the first female Kora virtuoso to come from a legendary West African Griot lineage that includes her grandfather Amadu Bansang Jobarteh and her cousin Toumani Diabaté. Renowned for her skill as an instrumentalist, distinctive voice, infectious melodies and onstage grace, Jobarteh’s unique ability to touch audiences from all backgrounds and cultures has led her to international success.

PETER YARROW Since the Civil Rights era, Peter Yarrow has committed his time and talentâ&#x20AC;&#x201D;both with renowned trio Peter, Paul & Mary and as a solo performerâ&#x20AC;&#x201D;to social justice causes that have utilized his skills as both a performer and an organizer. His gift for songwriting has produced some of the most moving songs Peter, Paul & Mary have recorded, earning several gold and platinum albums and numerous Grammys. For this intimate evening of performance and conversation at The ArtsCenter, Yarrow will share his years of music and activism through songs and stories that encourage us each to change the world.

AN EVENING WITH PETER YARROW

THE SEASHELL AND THE CLERGYMAN LIVE FILM SCORE BY TIM CARLESS

THE DEVIL AND MARK TWAIN

Heartfelt, energetic and down-home bluegrass group The Barefoot Movement invites you to join them for their holiday celebration performance. Enjoy acoustic renditions of everything from Chuck Berry’s “Run Run Rudolph” to Perry Como’s “It’s Beginning to Look A Lot Like Christmas” as well as classic carols.

ELLIS DYSON AND THE SHAMBLES WITH KATHARINE WHALEN Join us for a rockin’ New Year’s Eve at The ArtsCenter! Local old-time favorites Ellis Dyson and The Shambles, joined by singer Katharine Whalen, ring in 2019 with a foot-stompin’ night of music including songs of the Squirrel Nut Zippers. Live music opens the evening, with live DJ sets to follow starting at 11:00 PM. Join us as we ring in 2019 with a high-energy New Year’s Eve party at The ArtsCenter!

JOEY CALDERAZZO BAND Acclaimed jazz pianist Joey Calderazzo makes a rare local appearance at The ArtsCenter this December. Best known for his 20-year tenure as a member of the Branford Marsalis Quartet (including the award winning Four MFâ&#x20AC;&#x2122;s Playing Tunes and the Grammy-nominated collaboration with Kurt Elling Upward Spiral) his work as a soloist and bandleader continues to evolve and develop. His 2015 album Going Home finds him bringing a fresh and hard-won perspective to the piano trio format, one informed by his North Carolina home and by his years spent gigging and recording around the world.

LAURIE LEWIS AND THE RIGHT HANDS

Grammy Award-winning musician Laurie Lewis is internationally renowned as a singer, songwriter, fiddler, bandleader, producer and educator. A pioneering woman in bluegrass and a founding member of the Good Ol’ Persons and the Grant Street String Band, Laurie has twice been voted IBMA’s Female Vocalist of the Year and has recorded nearly twenty albums over her two decades as a recording artist. Her latest album The Hazel and Alice Sessions, a collaborative effort with her band The Right Hands and bluegrass legends Hazel Dickens and Alice Gerrard, was nominated for the Best Bluegrass Recording Grammy in 2017.

“Her voice is a rare combination of grit and grace, strength and delicacy. Her stories are always true.” ­— Linda Ronstadt

Richard shindell Richard Shindell is a New York- and Buenos Aires-based songwriter whose songs explore themes of immanence and transcendence, human love and divine love, the particular and the general. His recent work includes CryCryCry, a collaboration with ArtsCenter favorites Lucy Kaplansky and Dar Williams which recieved critical acclaim for its beautiful three-part harmonies.

LA PATRONAL La Patronal is a brass band from Lima, Peru that is rooted in the tradition of â&#x20AC;&#x153;fiestas populares,â&#x20AC;? town fairs common in Latin American villages. Direct descendants of rural Peruvian musicians, the members of La Patronal use their knowledge of folk culture and their formal music education to preserve and celebrate their heritage as they bring it into the present. Their lively and interactive performances combine contagious percussion and vibrant brass and winds with traditional masks and dancing for an irresistible party guaranteed to make you move.

In Flip the Script: A Play in Progress, classic works are reworked and remixed into new pieces, integrating poetry, spoken word and music. Led by Dasan Ahanu, a group of artists will work together to shape each piece of the production.

THE DEVIL AND MARK TWAIN In this new play by Paul Newell, competing forces in Mark Twain’s life and work collide in his dreams on a fateful night. The result is what many regard as the greatest achievement in American literature, The Adventures of Huckleberry Finn. The ArtsCenter teams up with Full Nelson Playwrights Theater for this rich and revealing trip into the mind, heart, and indomitable spirit of America’s most famous author.

MANHATTAN SHORT FILM FESTIVAL MANHATTAN SHORT is an instantaneous celebration that occurs simultaneously across the globe, bringing engaging short films to great venues and allowing the audiences to vote for their favorites.

Tim Carless is a Carrboro-based musician who combines classic films from the silent era with original scores performed live, both solo and in an ensemble setting.

JOSHua lozoff: life is magic ArtsCenter favorite Joshua Lozoff returns home for an encore presentation of Joshua Lozoff: Life is Magic, combining amazing illusions with mental feats that explore the possibilities of the human mind. This fun, mind-boggling evening is appropriate for all ages and will leave you amazed and laughing.

ARTSCENTER PARTNERS Organizations working in partnership with The ArtsCenter PlaySlam! by OdysseyStage PlaySlam! is a theatre competition where 12 playwrights submit short plays which are acted out by a collection of local actors and voted on by the audience. November 10 - 8pm

Family-Friendly Transactors Improv Family-friendly short-form improv scenes, made up on the spot. September 15, November 10, January 12, March 16, May 18 - 6pm Additional events will be added throughout the year. Visit artscenterlive.org and subscribe to our monthly eNewsletter for ongoing calendar updates and promotions. Follow us on social media for up-to-the-minute news, discounts and more: