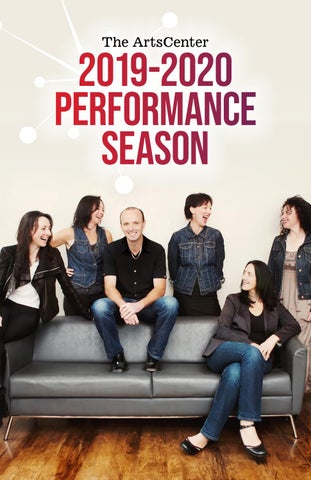 OUR 2019-2020 SEASON Welcome to The ArtsCenter’s 2019-2020 Performance Season! As I reviewed the shows in the upcoming season I was struck by the juxtaposition of the old and the new, and how this was a key factor in selecting shows to present to the community. We are bringing back some favorites, including The Tannahill Weavers who are celebrating their 50th anniversary and their record 26th performance at The ArtsCenter. This total is more than any other touring group and we are delighted to welcome them back after a few years’ hiatus. Long-standing favorite John Jorgenson returns after a ten-year absence, bringing along a new bluegrass show with an all-star band. Check out their videos at artscenterlive.org. Simultaneously, we’re bringing several artists to The ArtsCenter for the first time. This Fall, Korean percussionist Kim So Ra will perform on our stage on her first US tour. I saw her performance at an international music festival last year and knew I had to share her amazing talent and blend of traditional and contemporary sounds with our audiences here in Carrboro. Several well-known artists will also make their first appearance here this season. Singer-songwriter Joan Osborne joins us this Spring to share her classic hits and highly acclaimed new album. Performer and music historian Don Flemons, formerly of the Carolina Chocolate Drops, will present a solo evening of music and stories. And Aoife O’Donovan, a member of the powerhouse trio I’m With Her, is joined by Brittany and Natalie Haas for a “Songs and Strings” concert. These are just a few of the great artists we have selected for this upcoming season. Peruse this catalog, pick a few favorites like BeauSoleil Cajun Christmas and Tuvan masters Alash, AND try something new. You’ll be delighted by the homecoming of familiar artists and dazzled by the discovery of a new favorite! See you at The ArtsCenter!

ArtSchool ArtSchool at The ArtsCenter

at The ArtsCenter Take time to create with classes and workshops for all ages in painting, ceramics, photography,

Learn more and enroll at artscenterlive.org/artschool

A breakout star in Korean traditional music, award-winning percussionist and composer Kim So Ra is one of the most skilled and internationally renowned janggu (Korean double-headed drum) players performing today. She is known for her genre-bending performances, which combine traditional Korean styles and instrumentation with contemporary influences and visuals. She joins us on her debut tour of the United States, which includes dates at the Philadelphia Folk Festival and Lincoln Center.

BOMBINO AND VIEUX FARKA TOURÉ: SONS OF THE SAHARA Vieux Farka Touré—often referred to as “The Hendrix of the Sahara”—is the son of legendary Malian guitar player Ali Farka Touré and joins us for his second ArtsCenter appearance. Bombino, the first artist from Niger to be nominated for a Grammy Award, is quickly becoming a global star with his sunny blend of Tuareg blues and reggae. Bombino and Vieux Farka Touré perform joint and separate sets, both electric and acoustic, transporting the audience on a dazzling and intimate musical journey to the Sahara Desert, the original birthplace of the blues.

SUSAN WERNER Best known for her work in the contemporary folk genre, Susan Werner’s talent as a songwriter and vocalist continually drives her to explore new styles. Werner’s creative restlessness has become her defining characteristic, and her live performance blends these varied styles into an unforgettable evening.

WITH SPECIAL GUEST SHODOKEH Alash are masters of Tuvan throat singing (xöömei), a remarkable technique for singing multiple pitches at the same time. What distinguishes this trio from earlier generations of Tuvan throat singers is the subtle infusion of modern influences into their traditional music. For this return to The ArtsCenter, they are joined by Shodokeh, a Baltimore-based beatboxer and vocal percussionist.

Carolyn Adams is the world premiere of a play about friendship, love, and letting go. As the play begins, men gather in the back room of a used sports equipment shop in a small northern California town to watch Monday Night Football, until the evening is sideswiped by the entrance of a young woman they suspect is the reincarnation of a local girl who died tragically many years ago. This comic drama, written by Mark Cornell and directed by Nancy Lane, is co-presented with Full Nelson Theater, creators of last Springâ&amp;#x20AC;&amp;#x2122;s hit The Devil and Mark Twain.

KELLER WILLIAMS Since he first appeared on the scene in the early ’90s, Keller Williams has gained fame creating his own much-imitated hybrid of guitar-driven bluegrass and groovy, loop-based electronica. Williams has performed and recorded with legends like Victor Wooten, Bob Weir, Bela Fleck, and The Travelin’ McCourys. Recent highlights include a 2017 tour with ArtsCenter favorite Leo Kottke (Shut the Folk Up and Listen) as well as his 2019 album of originals and covers, Add. From acoustic to electric, bluegrass to rock and beyond, Keller Williams fans know to expect the unexpected from this master musician.

BEAUSOLEIL CAJUN CHRISTMAS BeauSoleil avec Michael Doucet returns for a special celebration featuring swamp-pop takes on classic holiday tunes. Born out of the rich Acadian ancestry of its members and bandleader Michael Doucet’s spellbinding fiddle playing and soulful vocals, you’ll want to get up and dance to their blend of New Orleans jazz, blues, rock, folk, Zydeco, country and bluegrass.

Traditional music of Scotland and Ireland

Seasonal programming for the whole family

BOMBINO AND VIEUX FARKA TOURÉ: SONS OF THE SAHARA •

JOAN OSBORNE Joan Osborne has earned a reputation as one of the great voices of her generation—both a commanding, passionate performer and a frank, emotionally evocative songwriter. A multi-platinum selling recording artist and and seven-time Grammy nominee, she is most known for the massive MTV smash hit “One of Us.” Osborne is highly sought-after as a collaborator and has performed alongside artists like Stevie Wonder, Bob Dylan, Luciano Pavarotti, Emmylou Harris, Taj Mahal, and Mavis Staples. Most recently, she co-produced her own critically acclaimed solo record Love and Hate, noting “…the more I’ve done this, the more tone and depth I’ve developed. This was the time.”

LEAHY Leahy is back on the road and The ArtsCenter is delighted to welcome them for the next chapter in the story of one of the century’s most highly-regarded progressive folk-roots bands. The Leahy siblings were raised on their family farm near Lakefield, Ontario, Canada, where they learned to play the fiddle from their father. Their mother—who was raised in Cape Breton, Nova Scotia—taught them to sing, dance, and play the piano. A deal with Virgin Records in the 1990’s catapulted the group to stardom and helped their first album go double platinum in Canada and reach No. 4 on the Billboard world music chart. Built on their roots and their distinctive, get-up-and-dance “Leahy sound,” their new project Good Water reveals the band’s drive to continue pushing beyond its traditional footings.

JOHN JORGENSON BLUEGRASS BAND The John Jorgenson Bluegrass Band is an all-star group of four legendary, award-winning musicians— John Jorgenson on acoustic guitar, mandolin and vocals; Herb Pedersen on banjo, acoustic guitar and vocals; Mark Fain on bass; and Patrick Sauber on acoustic guitar and vocals—playing bluegrass like no one has ever played it before. This spot-on union of impeccable musicianship, incomparable songwriting, incredible vocal harmonies and seasoned showmanship is American Roots music at its finest. A perennial favorite of Carrboro crowds, it’s been ten years since he last performed at The ArtsCenter and we are delighted to welcome him back. GET TICKETS AT ARTSCENTERLIVE.ORG

DOM FLEMONS A founding member of the Carolina Chocolate Drops, multi-instrumentalist Dom Flemons is an expert player on the banjo, fife, guitar, harmonica, jug, percussion, quills, and rhythm bones, and a music scholar with a repertoire that covers over 100 years of American traditional music. His 2018 album Black Cowboys hit #5 on the Billboard Bluegrass charts, adding to a list of accolades that includes a 2010 Grammy Award win for Best Folk Album. His major solo debut at the Grand Old Opry, on a night with Carrie Underwood and Old Crow Medicine Show, left no doubt that Flemons is a headliner on his own. We are excited to welcome Flemons for his ArtsCenter debut in our intimate concert space.

aoife o’donovan: songs and strings Called “a vocalist of unerring instinct” by the New York Times, O’Donovan is one of the most sought after vocalists and songwriters of her generation and has collaborated with some of the most eminent names in music across a wide variety of genres. Co-founder of the bands Crooked Still and I’m With Her, O’Donovan is the featured vocalist on The Goat Rodeo Sessions, the Grammy-winning album by Yo-Yo Ma, Stuart Duncan, Edgar Meyer, and Chris Thile. Her new project Songs and Strings includes the song cycle “Bull Frogs Croon” which uses stunning text by the late, and former Poet Laureate of Oregon, Peter Sears, as well as traditional favorites and songs from her expansive career. GET TICKETS AT ARTSCENTERLIVE.ORG

TANNAHILL WEAVERS The ArtsCenter’s perennial favorite (this will be their 26th time here at The ArtsCenter!), the Tannahill Weavers  have spent a half-century as Scotland’s premiere folk band, combining traditional melodies with driving rhythmic accompaniment and rich vocals to win fans beyond the folk and Celtic music scenes. Celebrating their golden anniversary, they show no signs of slowing down. In 2014 the band was joined by innovative piper Lorne MacDougall, who has arranged and performed pipes for many projects including the Disney Pixar movie Brave and Dreamworks’ How to Train Your Dragon 2. Firmly established as one of the premier Celtic groups on the concert stage, they bring their enthusiasm and lively spirits to material that ranges from reflective ballads to foot-stomping reels and jigs.

ARTSCENTER PARTNERS Organizations working in partnership with The ArtsCenter PlayJam! by OdysseyStage &amp; Triangle Playwrights PlayJam! is a theatre competition where playwrights submit short plays which are acted out by a collection of local actors and the audience votes on a winner. November 23 - 8pm

Additional events will be added throughout the year. Visit artscenterlive.org and subscribe to our monthly eNewsletter for ongoing calendar updates and promotions. Follow us on social media for up-to-the-minute news, discounts and more:

Become a Member and recieve a 15% discount off performances and classes, as well as special Members-Only promotions and updates. Find out first when your favorite artists are coming to The ArtsCenter and get exclusive early access to tickets! (Member discount may not be combined with other offers or discounts.) You can be a catalyst for education and excellence in the arts with your membership. Visit artscenterlive.org/support or call us at 919-929-2787 to become a member.

TICKET INFORMATION • All seating is General Admission, unless otherwise noted. • All sales are final, with the exclusion of a cancellation or reschedule. • Ticket fees and tax are not included in prices listed. • Ticket exchanges can be made for a $2 charge per ticket, up to 2 weeks prior to show date. ArtsCenter Members may exchange tickets for free. • Skip the line and purchase your print-at-home ticket at artscenterlive.org. • Performances are subject to change. Whenever possible, you will be notified and offered a ticket exchange or refund. • If you cannot print or have lost your ticket, we can print your ticket at the box office. • Several pay and free parking lots are available within a few blocks of The ArtsCenter. Please visit www.artscenterlive.org for a map of parking lot locations. • The ArtsCenter strives to make its facility accessible to all patrons. Wheelchair accessibility is available for all performances. Please contact our Box Office at boxoffice@artscenterlive.org or 919-929-2787 for specific accomodations. 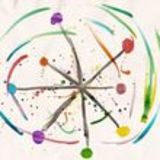 More from The ArtsCenter