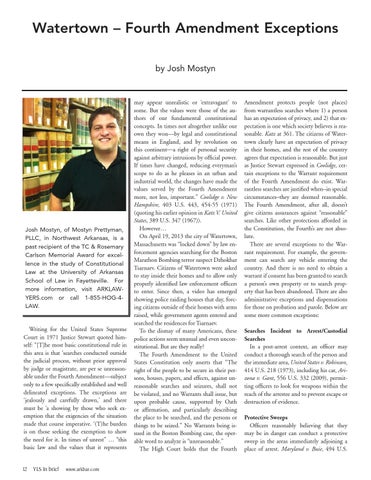 Josh Mostyn, of Mostyn Prettyman, PLLC, in Northwest Arkansas, is a past recipient of the TC & Rosemary Carlson Memorial Award for excellence in the study of Constitutional Law at the University of Arkansas School of Law in Fayetteville. For more information, visit ARKLAWYERS.com or call 1-855-HOG-4LAW.

Writing for the United States Supreme Court in 1971 Justice Stewart quoted himself: “[T]he most basic constitutional rule in this area is that ‘searches conducted outside the judicial process, without prior approval by judge or magistrate, are per se unreasonable under the Fourth Amendment—subject only to a few specifically established and well delineated exceptions. The exceptions are ‘jealously and carefully drawn,’ and there must be ‘a showing by those who seek exemption that the exigencies of the situation made that course imperative. ‘(T)he burden is on those seeking the exemption to show the need for it. In times of unrest” … “this basic law and the values that it represents

may appear unrealistic or ‘extravagant’ to some. But the values were those of the authors of our fundamental constitutional concepts. In times not altogether unlike our own they won—by legal and constitutional means in England, and by revolution on this continent—a right of personal security against arbitrary intrusions by official power. If times have changed, reducing everyman’s scope to do as he pleases in an urban and industrial world, the changes have made the values served by the Fourth Amendment more, not less, important.” Coolidge v. New Hampshire, 403 U.S. 443, 454-55 (1971) (quoting his earlier opinion in Katz V. United States, 389 U.S. 347 (1967)). However… On April 19, 2013 the city of Watertown, Massachusetts was “locked down” by law enforcement agencies searching for the Boston Marathon Bombing terror suspect Dzhokhar Tsarnaev. Citizens of Watertown were asked to stay inside their homes and to allow only properly identified law enforcement officers to enter. Since then, a video has emerged showing police raiding houses that day, forcing citizens outside of their homes with arms raised, while government agents entered and searched the residences for Tsarnaev. To the dismay of many Americans, these police actions seem unusual and even unconstitutional. But are they really? The Fourth Amendment to the United States Constitution only asserts that “The right of the people to be secure in their persons, houses, papers, and effects, against unreasonable searches and seizures, shall not be violated, and no Warrants shall issue, but upon probable cause, supported by Oath or affirmation, and particularly describing the place to be searched, and the persons or things to be seized.” No Warrants being issued in the Boston Bombing case, the operable word to analyze is “unreasonable.” The High Court holds that the Fourth

Amendment protects people (not places) from warrantless searches where 1) a person has an expectation of privacy, and 2) that expectation is one which society believes is reasonable. Katz at 361. The citizens of Watertown clearly have an expectation of privacy in their homes, and the rest of the country agrees that expectation is reasonable. But just as Justice Stewart expressed in Coolidge, certain exceptions to the Warrant requirement of the Fourth Amendment do exist. Warrantless searches are justified when–in special circumstances–they are deemed reasonable. The Fourth Amendment, after all, doesn’t give citizens assurances against “reasonable” searches. Like other protections afforded in the Constitution, the Fourth’s are not absolute. There are several exceptions to the Warrant requirement. For example, the government can search any vehicle entering the country. And there is no need to obtain a warrant if consent has been granted to search a person’s own property or to search property that has been abandoned. There are also administrative exceptions and dispensations for those on probation and parole. Below are some more common exceptions: Searches Incident to Arrest/Custodial Searches In a post-arrest context, an officer may conduct a thorough search of the person and the immediate area, United States v. Robinson, 414 U.S. 218 (1973), including his car, Arizona v. Gant, 556 U.S. 332 (2009), permitting officers to look for weapons within the reach of the arrestee and to prevent escape or destruction of evidence. Protective Sweeps Officers reasonably believing that they may be in danger can conduct a protective sweep in the areas immediately adjoining a place of arrest. Maryland v. Buie, 494 U.S.