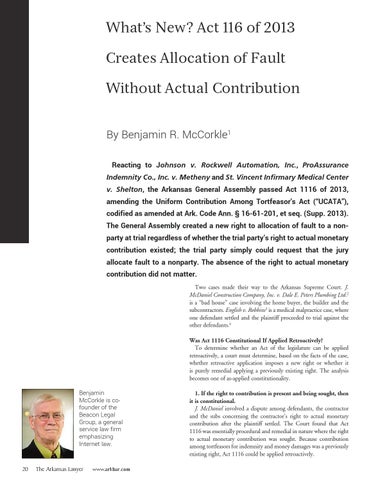 What’s New? Act 116 of 2013 Creates Allocation of Fault Without Actual Contribution By Benjamin R. McCorkle1 Reacting to Johnson v. Rockwell Automation, Inc., ProAssurance Indemnity Co., Inc. v. Metheny and St. Vincent Infirmary Medical Center v. Shelton, the Arkansas General Assembly passed Act 1116 of 2013, amending the Uniform Contribution Among Tortfeasor’s Act (“UCATA”), codified as amended at Ark. Code Ann. § 16-61-201, et seq. (Supp. 2013). The General Assembly created a new right to allocation of fault to a nonparty at trial regardless of whether the trial party’s right to actual monetary contribution existed; the trial party simply could request that the jury allocate fault to a nonparty. The absence of the right to actual monetary contribution did not matter. Two cases made their way to the Arkansas Supreme Court. J. McDaniel Construction Company, Inc. v. Dale E. Peters Plumbing Ltd.2 is a “bad house” case involving the home buyer, the builder and the subcontractors. English v. Robbins3 is a medical malpractice case, where one defendant settled and the plaintiff proceeded to trial against the other defendants.4 Was Act 1116 Constitutional If Applied Retroactively? To determine whether an Act of the legislature can be applied retroactively, a court must determine, based on the facts of the case, whether retroactive application imposes a new right or whether it is purely remedial applying a previously existing right. The analysis becomes one of as-applied constitutionality. Benjamin McCorkle is cofounder of the Beacon Legal Group, a general service law firm emphasizing Internet law.

1. If the right to contribution is present and being sought, then it is constitutional. J. McDaniel involved a dispute among defendants, the contractor and the subs concerning the contractor’s right to actual monetary contribution after the plaintiff settled. The Court found that Act 1116 was essentially procedural and remedial in nature where the right to actual monetary contribution was sought. Because contribution among tortfeasors for indemnity and money damages was a previously existing right, Act 1116 could be applied retroactively.