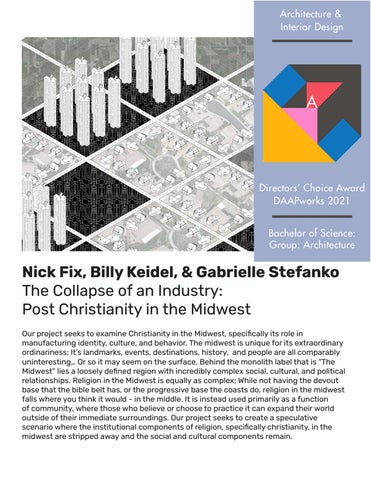 Nick Fix, Billy Keidel, & Gabrielle Stefanko The Collapse of an Industry: Post Christianity in the Midwest Our project seeks to examine Christianity in the Midwest, specifically its role in manufacturing identity, culture, and behavior. The midwest is unique for its extraordinary ordinariness; It’s landmarks, events, destinations, history, and people are all comparably uninteresting… Or so it may seem on the surface. Behind the monolith label that is “The Midwest” lies a loosely defined region with incredibly complex social, cultural, and political relationships. Religion in the Midwest is equally as complex; While not having the devout base that the bible belt has, or the progressive base the coasts do, religion in the midwest falls where you think it would - in the middle. It is instead used primarily as a function of community, where those who believe or choose to practice it can expand their world outside of their immediate surroundings. Our project seeks to create a speculative scenario where the institutional components of religion, specifically christianity, in the midwest are stripped away and the social and cultural components remain.

The midwest is unique for its extraordinary ordinariness; It’s landmarks, events, destinations, history, and people are all comparably uninteresting… Or so it may seem on the surface. Behind the monolith label that is “The Midwest” lies a loosely defined region with incredibly complex social, cultural, and political relationships. Religion in the Midwest is equally as complex; While not having the devout base that the bible belt has, or the progressive base the coasts do, religion in the midwest falls where you think it would - in the middle.

It is instead used primarily as a function of community, where those who believe or choose to practice it can expand their world outside of their immediate surroundings. Now, The institutional components of religion, specifically christianity, in the midwest have been stripped away and the social and cultural components remain. We have observed several example societies and artifacts of this new quasi-religious phenomenon in the midwest, and we are here to share them with you today. They have been organized into several progressing sacramental stages for your convenience.

Conception and the concept of original sin. It begins with sex. The psudo-sacred sacrament of fornication reliant on fertility, now a thing of futile theatricality. Ampitheaters are show-and-tell incubators of impregnantion, as demonstrated by the Father himself. Bed as monument, bed as stage - keep an eye out, don’t miss anything. Take note - this began with a phone message, a few drinks, and a prayer - here we are. You are never alone. Hot tub grottos, converted baptisimal fonts, line the floors inhabited by priests, with their conception guidance only a scream away. Those with swagger, status, and aplomb opt to buy one of the baptisimal jacuzzis from old cathedrals, a relic of the past and a symbol of fertility and success. Please do not forget the gender reveal ritual - we saw it happen first, now place your bets. Remember, there’s only one right answer...

Throughout the rural areas of the midwest, fringe communities of new religious extremists have begun sprouting up. Obsessed with the old icons of christiantiy, they mark their crop fields with the cross to communicate with the heavens and cosplay as old religious figures to positively reinforce the young. Everything on the farm is mechanized and streamlined, even birth. The act of delivering a baby is carried out with the same efficiency as the other agro-industrial processes on the farm. These communities typically find some product to manufactureas a way to financially sustain themselves, creating a new worship that obsesses over creation in all its forms.

A nomadic priesthood now travels throughout the midwest, blessing everything in sight. They accept everyone and everything into their post-christian faith, occasionally catering to and indulging in their own interests along the way. Their services are more serious and saintly when making the rounds through whichever town they find themselves in, conducting door to door baptisms in whatever ancillary spaces the residents can set aside. The garage has become a particularly popular choice for homeowners, and many have altered the envelope and decoration of this space for this exact occasion. They’ve become multi-functional, operating as part-lounge space or storage area and part-ad-hoc cathedral, where one enters the faith next to boxes of old, forgotten junk or aged college furniture.

Bread & body, drunk everybody, please imbibe the lord responsibly. Years of wondering, Mister Mystery - what’s he up to and what’s in the altar? Time to drink the kool aid. ”As we all gather here today…” it always begins the same. A nod of the head, pop it on your tongue, wait an hour and good times are coming. The honorary first communion is the initiator for being given one’s first cell phone. They’re initiated and tidilated, there is no going back. Receiving the gifts of the ceremonial tabernacle and blessed marijuana stash drawer are honors worth cherishing until death. Objects of desire, religious iconography more important than the body, blood, and grass itself. Once you start, you can’t stop. The wafers are wonderful - “Broadman Church Supplies Communion Wafer, Cross Design, 1,000 count. Add to cart. The momentous occasion reaches a pinnacle at the priests home, where a soiree fit for Hugh Hefner himself ensues. “I think he was there.” A mansion is made for impressing those young and naive, and Father certainly makes the most of it. Hell is Real.

The fear of God and punishment for sin are lost in an age of indulgences. However, a strong sense of community is still predicated on a strong sense of self, which is accomplished by reconciliation. With a focus on introspective evolution over retrospective stagnation, repenting occurs in likely places, whether it be the reading chair in the den beside copies of Magic Medicine and Dante’s Inferno or in the side-aisles of the barn-cathedral embedded into retrofitted horse stalls. It takes on a different look for the individual, sometimes as a candle seance, sometimes as a cell of solitude, but regardless of medium the release of the individual from the old sacred words which no longer service them allows for creative paths to reconciliation.

Marriage, similar to birth, marks the beginning of a new life, where two bodies and souls fuse together as one. This calls for a celebration, and the ritual has particularly taken off in the suburbs. Bloc party-esque exultations erupt throughout the cul-de-sacs and sidewalks, where house by house families and friends celebrate the newly wed couple who resides in their community. The houses themselves have even become a spectacle of sorts, known for their experimental nature. The homeowners have taken it upon themselves to renovate and add upon their own houses to accommodate these matrimonial ceremonies, leading to a neighborhood of remixed and edited houses that appear as excited, serious, or uninterested as their owners about this sacred bondage.

Upon starting a family, the theatricalities of old Catholicism re-emerge with new adaptations. For every child born to a happy couple, a leaf is added to the dining table until the orientation of the last supper is accomplished. The iconic last supper becomes a perennial ritual in the traditional American home.

Relief from life and marriage begins in dying. Individuals recede from the personalized cross homes - which have blessed them with good health and solitary happiness - and opt for less spacious and refined living spaces - roomy coffins. The couple whose dinner table once hosted their many children now lives in separate living quarters, divided by four foot thick walls and connected only by a narrow hallway to the honeymoon sweet of yore. Life’s relics are given away or sold, and only the most precious objects remain like the tabernacle and weed drawer. The rest of one’s existence is equated to estate sales. Co-living in sickness, all are able to prepare themselves for death shopping for a bed one last time.

Death is the greatest celebration. The local dive bar is a network of subterranean catacombs which have emerged beneath the suburban garage cathedrals. Engraved onto the headstones of the deceased are their favorite cocktails, encouraging mourners to maintain the dead’s favorite path to inebriation for eternity. Rural areas celebrate accordingly in graveyards near the barn factories.

In the midst of collisions in iconography and culture, the lines between worship, pleasure, and the everyday are blurred. Moving out of God and into the enjoyment of God’s gifts moves the focal point of religion into the arbitrary and affirms the everyday here and now rather than there and then. The boundaries of type and typology are no longer clear, and therefore what we see in the afterlife is a mirror image of what we’ve already. 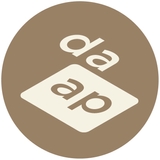 *DIRECTOR'S CHOICE WINNER- BS ARCHITECTURE GROUP PROJECT* The Collapse of an Industry: Post Christianity in the Midwest Our project seeks to...

*DIRECTOR'S CHOICE WINNER- BS ARCHITECTURE GROUP PROJECT* The Collapse of an Industry: Post Christianity in the Midwest Our project seeks to...