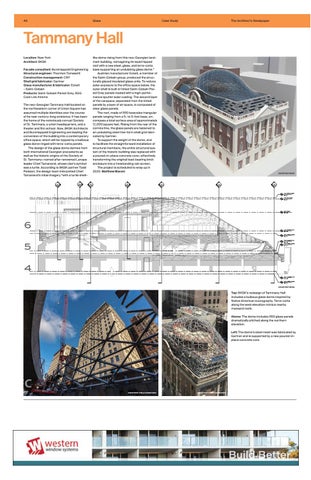 like dome rising from this neo-Georgian landmark building, reimagining its tepid hipped roof with a new steel, glass, and terra-cotta base supporting an undulating glass dome.” Austrian manufacturer Eckelt, a member of the Saint-Gobain group, produced the structurally glazed insulated glass units. To reduce solar exposure to the office space below, the outer shell is built of tinted Saint-Gobain Parsol Grey panels treated with a high-performance sputter solar coating. The second layer of the carapace, separated from the tinted panels by a layer of air space, is composed of clear glass panels. The roof, made of 850 isosceles triangular panels ranging from a 5- to 9-foot base, encompass a total surface area of approximately 12,000 square feet. Rising from the rear of the cornice line, the glass panels are fastened to an undulating steel free-form shell grid fabricated by Gartner. To support the weight of the dome, and to facilitate the straightforward installation of structural members, the entire structural system of the historic building was replaced with a poured-in-place concrete core—effectively transforming the original load-bearing brick enclosure into a freestanding rain screen. The project is scheduled to wrap up in 2020. Matthew Marani

Facade consultant: BuroHappold Engineering Structural engineer: Thornton Tomasetti Construction management: CNY Shell grid fabricator: Gartner Glass manufacturer &amp; fabricator: Eckelt – Saint-Gobain Products: Saint-Gobain Parsol Grey, SGG Cool-Lite Xtreme The neo-Georgian Tammany Hall located on the northeastern corner of Union Square has assumed multiple identities over the course of its near century-long existence: It has been the home of the notoriously corrupt Society of St. Tammany, a union headquarters, and a theater and film school. Now, BKSK Architects and BuroHappold Engineering are leading the conversion of the building into a contemporary office space, which will be topped by a bulbous glass dome ringed with terra-cotta panels. The design of the glass dome derives from both international Georgian precedents as well as the historic origins of the Society of St. Tammany—named after renowned Lenape leader Chief Tamanend, whose clan’s symbol was a turtle. According to BKSK partner Todd Poisson, the design team interpreted Chief Tamanend’s tribal imagery “with a turtle shell– 1

Above: The dome includes 850 glass panels dramatically pitched along the northern elevation. Left: The dome’s steel mesh was fabricated by Gartner and is supported by a new poured-inplace concrete core. 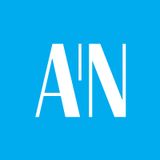