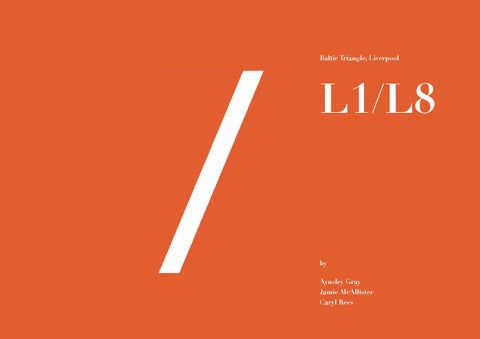 Local Policy Context streets should be designed as public spaces + to promote accessibility and local not just in response to engineering considerations. permeability by making places that connect with each other and are easy to move through, putting + transport routes should reflect urban design people before traffic and integrating land uses and qualities and not just traffic considerations. transport. +

+ the proposal must have a sensitive

legibility through development that

people find their way around.

character in townscape and

landscape by responding to and reinforcing locally + to promote adaptability through development that can distinctive patterns of development, landscape and respond to changing social, technological and culture. economic conditions. + to promote the continuity

of street frontages and the enclosure of space by development which clearly defines private and public areas.

viable places that respond to local

+ to promote public spaces and routes that are attractive, safe, uncluttered and work effectively for all in society, including disabled and elderly people.

riverside residents live in some of the most deprived areas in England.”

properties were long term vacant, accounting for 5.0% of the total stock. This compares with a City-wide rate of 3.5%. Put another way, 6.5% of all long term vacant dwellings in the city were located in the Riverside ward.”

Education “In 2011, 34.9% of pupils resident in Riverside achieved 5+ A*-C grades including English and maths, which is the lowest

rate of all 30 Liverpool wards and well below the Liverpool average (55.7%).

Unemployment “The current worklessness rate in Riverside is 25.3% which is higher than the Liverpool average of 21.9% and twice

â&amp;#x20AC;&amp;#x153;Improve the basic quality of the environment and legibility

+ to establish connection between the site and the docks/waterfront.

Condition: Buildings causing blockade for the public to connect with the Docks and Waterfront.

Design Response: Demolition of poor buildings and introduce a designed waterfront green space that will connect to the Docks and Waterfront.

current site peripherals show the extension of the Baltic Triangle as the site is considered by Liverpool Vision. the connecting of surrounding residential communities is another key focal point to the proposal strategy. the conflicting building uses of residential and industrial across the site causes an unwanted edge

acting as a barrier to the rest of the city.

Demolition &amp; Retention_____ the map illustrates clearly in grey the buildings we decided to retain and in red the buildings we chose to demolish. with a strong intention to keep anything of architectural merit. we have chosen to re-use the majority of existing warehouses as temporary start up catalysts, and demolish those left derelict and buildings in prime

Building Uses_______________ the proposed building uses have been determined by the overall district route strategy and historic buildings within the locality. this has manifested into a patchwork of areas, resulting in a culturally diverse and actively

Proposed Fabric____________ the current proposals approved for planning are allowed to continue as the developments will bring much needed life and regeneration to the area. the proposal alongside the retained buildings is also clear. the new developments are suggested developments in a longer phased plan for the area. Mainly suggesting building uses and possible developments as we see

the future for the site.

The proposal reintroduces two key amenities of the

the baltic triangle redevelopment serves as a prec-

past through St James train station and St James

edent for the site in creatively reusing the areas ware-

Market. The retention of surrounding warehouses will

promote a nostalgia of its industrial past.

bourhoods connect with other resident areas

and heritage assets, to draw in audiences

Signage &amp; Shop Usage_______ here are some of the suggested local businesses that could get involved across areas of proposal.

Mr Seels Garden is a local memory bank with a focus on food and community. It aims to relive the past in Liverpool as food was grown locally and intends to introduce food allotments and local produce facilities across the city. This is an opportunity for community involvement with St James Market in the proposal.

Bike n Go is a scheme introduced into Liverpool in an aim to encourage sustainable travel through the use of rental bicycles.

Baltic Bakehouse is a local sourdough artisan bread bakery in Liverpool situated on Bridgewater Street. The proposed market offers opportunity for the bakery to expand while also running workshops for the local

Liverpool SoundCity is an annual city centre music festival and conference in venues across the city. The warehouses and public square in the proposal

Liverpool Food and Drink Festival is an annual

offer great opportunity and space for such events to

expand and take place. The involvement of SoundCity

in this part of the city will bring jobs and community

of St James Market offers a large indoor venue for

Warehouse Re-Use_____ here is an example of the various pop-up uses of the existing warehouses can offer as a short-term catalyst for public engagement within the area. various community buildings are strategically plotted around the site, to helping to act as a buffer between the newly integrated residential units and the central commercial district. urban realm outside the warehouse will act as a meeting point linking ongoing tourists with the

Design Strategy_____________2 the site enclosed between the Baltic Triangle, Lower

context in a contemporary manner. The design of the

of small scale community developments in the form

public realm should reflect the guidance provided by

of a local primary school and medical centre to serve

the Waterfront Residential is mainly an industrial

the nearby residents, the introduction of St James

stronghold with a bold heritage. The area boasts

Market and a BMX centre into disused warehouses

current development on site while other proposals

brings activity. While the public begin to feed into the public realm and the high street thrives, developers

have been accepted. The area is in a state of change and while Liverpool Vision have labelled the site as the

see opportunity to build in the surrounding areas. Local

future Baltic Triangle continuation we have designed a

two key routes are enhanced and developed a high

proposal in keeping with the Baltic Triangle Framework

level of permeability for residents from all directions

employment. The creative community emerges as

through the site. The node created at the junction

of these two key axis offered the main large primary

artists to display their work and teach the next

the L1/L8 area will become known as an exciting,

stimulating and fun place to work, live and visit. It

of public open spaces within the site area, both of

primary school grow crops in their allotments and this

will be a mixed use area based upon community

a primary and secondary nature. The larger primary

encourages their parents to become involved with

the market activity. A local district is created and the

the public realm for the area and the city. It should be

process continues as the community grows.

environment. The scheme will strive to achieve

a sustainable approach both environmentally,

act as pocket parks for residents and local employees in close proximity to them.

The proposal development gradually from a

community perspective. The key aim was to connect

The proposal is a catalyst process. As many of the

the Lower Toxteth Residential area to the Baltic Triangle

existing warehouses are re-used and community

and furthermore into the Liverpool One. The industrial

grow. The first phase of the process includes the

to key parts of the city centre. The quality of the public

realm is a critical element in removing this barrier. The

in the form of a local primary school and medical

design must be sensitive to and reflect the historic

centre to serve the nearby residents, the introduction

+ The proposal should address issues such as

+ Materials used throughout construction must have

encouraging walking, cycling and use of public

minimal effect on the environment over their life cycle.

This will include the use of reclaimed brick from the

demolished buildings and locally sourced materials. Construction waste should be minimised before,

There will be a high focus on the use and

during and after completion of the developments.

development of derelict and disused buildings.

To protect and where necessary, improve air quality

+ Improvement of the poor public realm to intensively

+ The individual properties should address the inclusion of facilities such as low energy fittings, dual flush toilets,

reduce the conflict between industry and residential uses.

composting and water collection bins which can all

make a difference to the sustainability strategy of the proposal.

To maintain high and stable levels of employment

and reduce long-term unemployment (ECN) + The proposal will actively seek high quality as desired by government policies on the environment,

To reduce the number of vacant properties

seeking this high quality, all areas of development in

To improve the quality of, and protect, create and im-

the proposal must achieve validation by certificate

based on Building Research Establishment Environmental Assessment Method (BREEAM) for the

To reduce the need to travel and improve choice and

use of sustainable transport modes

construction and sustainable developments. Through