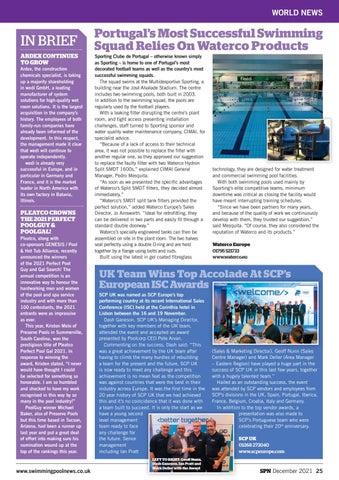 IN BRIEF ARDEX CONTINUES TO GROW Ardex, the construction chemicals specialist, is taking up a majority shareholding in wedi GmbH, a leading manufacturer of system solutions for high-quality wet room solutions. It is the largest acquisition in the company’s history. The employees of both family-run companies have already been informed of the development. In this respect, the management made it clear that wedi will continue to operate independently. wedi is already very successful in Europe, and in particular in Germany and France, and it is the market leader in North America with its own factory in Batavia, Illinois.

PLEATCO CROWNS THE 2021 PERFECT POOLGUY &amp; POOLGAL! Pleatco, along with co-sponsors GENESIS / Pool &amp; Hot Tub Alliance, recently announced the winners of the 2021 Perfect Pool Guy and Gal Search! The annual competition is an innovative way to honour the hardworking men and women of the pool and spa service industry and with more than 100 contestants, the 2021 entrants were as impressive as ever. This year, Kristen Melo of Preserve Pools in Summerville, South Carolina, won the prestigious title of Pleatco Perfect Pool Gal 2021. In response to winning the award, Kristen stated, “I never would have thought I could be selected for something so honorable. I am so humbled and shocked to have my work recognised in this way by so many in the pool industry!” PoolGuy winner Michael Baker, also of Preserve Pools but this time based in Tucson, Arizona, had been a runner up last year and put a great deal of effort into making sure his nomination wound up at the top of the rankings this year.

Portugal’s Most Successful Swimming Squad Relies On Waterco Products Sporting Clube de Portugal – otherwise known simply as Sporting – is home to one of Portugal’s most decorated football teams as well as the country’s most successful swimming squads. The squad swims at the Multidesportivo Sporting, a building near the José Alvalade Stadium. The centre includes two swimming pools, both built in 2003. In addition to the swimming squad, the pools are regularly used by the football players. With a leaking filter disrupting the centre’s plant room, and tight access presenting installation challenges, staff turned to Sporting sponsor and water quality water maintenance company, CIMAI, for specialist advice. “Because of a lack of access to their technical area, it was not possible to replace the filter with another regular one, so they approved our suggestion to replace the faulty filter with two Waterco Hydron Split SMDT 1600s,” explained CIMAI General Manager, Pedro Mesquita. “As soon as we presented the specific advantages of Waterco’s Split SMDT filters, they decided almost immediately.” “Waterco’s SMDT split tank filters provided the perfect solution,” added Waterco Europe’s Sales Director, Jo Ainsworth. “Ideal for retrofitting, they can be delivered in two parts and easily fit through a standard double doorway.” Waterco’s specially engineered tanks can then be assembled on site in the plant room. The two halves seal perfectly using a double O-ring and are held together by a flange using bolts and nuts. Built using the latest in gel coated fibreglass

technology, they are designed for water treatment and commercial swimming pool facilities. With both swimming pools used mainly by Sporting’s elite competitive teams, minimum downtime was critical as closing the facility would have meant interrupting training schedules. “Since we have been partners for many years, and because of the quality of work we continuously develop with them, they trusted our suggestion,” said Mesquita. “Of course, they also considered the reputation of Waterco and its products.” Waterco Europe 01795 521733 www.waterco.eu

UK Team Wins Top Accolade At SCP’s European ISC Awards SCP UK was named as SCP Europe’s top performing country at its recent International Sales Conference (ISC) held at the Corinthia hotel in Lisbon between the 16 and 19 November. Dash Ganeson, SCP UK’s Managing Director, together with key members of the UK team, attended the event and accepted an award presented by Poolcorp CEO Pete Arvan. Commenting on the success, Dash said: “This was a great achievement by the UK team after having to climb the many hurdles of rebuilding a team for the present and the future. SCP UK is now ready to meet any challenge and this achievement is no mean feat as the competition was against countries that were the best in their industry across Europe. It was the first time in the 20 year history of SCP UK that we had achieved this and it’s no coincidence that it was done with a team built to succeed. It is only the start as we have a young second level management team ready to face any challenge for the future. Senior management including Ian Pratt LEFT TO RIGHT: Geoff Nunn, Dash Ganeson, Ian Pratt and Mark Deller with the Award

(Sales &amp; Marketing Director), Geoff Nunn (Sales Centre Manager) and Mark Deller (Area Manager – Eastern Region) have played a huge part in the success of SCP UK in this last few years, together with a hugely talented team.” Hailed as an outstanding success, the event was attended by SCP vendors and employees from SCP’s divisions in the UK, Spain, Portugal, Iberica, France, Belgium, Croatia, Italy and Germany. In addition to the top vendor awards, a presentation was also made to SCP’s Portuguese team who were celebrating their 20th anniversary. SCP UK 01268 273040 www.scpeurope.com