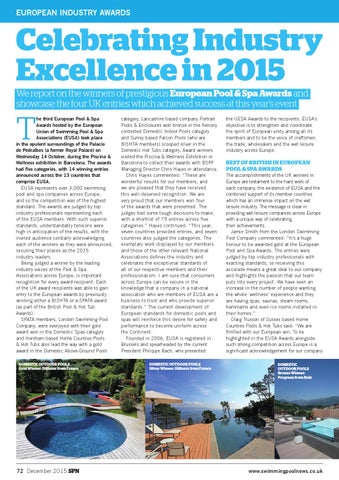 he third European Pool & Spa Awards hosted by the European Union of Swimming Pool & Spa Associations (EUSA) took place in the opulent surroundings of the Palacio de Pedralbes (a former Royal Palace) on Wednesday 14 October, during the Piscina & Wellness exhibition in Barcelona. The awards had five categories, with 14 winning entries announced across the 13 countries that comprise EUSA. EUSA represents over 3,000 swimming pool and spa companies across Europe, and so the competition was of the highest standard. The awards are judged by top industry professionals representing each of the EUSA members. With such superior standards, understandably tensions were high in anticipation of the results, with the invited audience cordially acknowledging each of the winners as they were announced, securing their places as the 2015 industry leaders. Being judged a winner by the leading industry voices of the Pool & Spa Associations across Europe, is important recognition for every award recipient. Each of the UK award recipients was able to gain entry to the European awards by previously winning either a BISHTA or a SPATA award (as part of the British Pool & Hot Tub Awards). SPATA members, London Swimming Pool Company, were overjoyed with their gold award won in the Domestic Spas category and Horsham based Home Counties Pools & Hot Tubs also lead the way with a gold award in the Domestic Above-Ground Pools DOMESTIC OUTDOOR POOLS Gold Winner: Diffazur from France

category. Lancashire based company Portrait Pools & Enclosures won bronze in the fiercely contested Domestic Indoor Pools category and Surrey based Falcon Pools (who are BISHTA members) scooped silver in the Domestic Hot Tubs category. Award winners visited the Piscina & Wellness Exhibition in Barcelona to collect their awards with BSPF Managing Director Chris Hayes in attendance. Chris Hayes commented: “These are wonderful results for our members, and we are pleased that they have received this well-deserved recognition. We are very proud that our members won four of the awards that were presented. The judges had some tough decisions to make, with a shortlist of 79 entries across five categories.” Hayes continued: “This year, seven countries provided entries, and seven countries also judged the categories. The exemplary work displayed by our members and those of the other relevant National Associations defines the industry and celebrates the exceptional standards of all of our respective members and their professionalism. I am sure that consumers across Europe can be secure in the knowledge that a company in a national association who are members of EUSA are a business to trust and who provide superior standards.” The current development of European standards for domestic pools and spas will reinforce this desire for safety and performance to become uniform across the Continent. Founded in 2006, EUSA is registered in Brussels and spearheaded by the current President Philippe Bach, who presented DOMESTIC OUTDOOR POOLS Silver Winner: Diffazur from France

the UESA Awards to the recipients. EUSA’s objective is to strengthen and coordinate the spirit of European unity among all its members and to be the voice of craftsmen, the trade, wholesalers and the wet leisure industry across Europe.

BEST OF BRITISH IN EUROPEAN POOL & SPA AWARDS The accomplishments of the UK winners in Europe are testament to the hard work of each company, the existence of EUSA and the combined support of its member countries which has an immense impact on the wet leisure industry. The message is clear in providing wet leisure companies across Europe with a unique way of celebrating their achievements. Jamie Smith from the London Swimming Pool Company commented: “It’s a huge honour to be awarded gold at the European Pool and Spa Awards. The entries were judged by top industry professionals with exacting standards, so receiving this accolade means a great deal to our company and highlights the passion that our team puts into every project. We have seen an increase in the number of people wanting the whole ‘wellness’ experience and they are having spas, saunas, steam rooms, hammams and even ice rooms installed in their homes.” Craig Trusson of Sussex based Home Counties Pools & Hot Tubs said: “We are thrilled with our European win. To be highlighted in the EUSA Awards alongside such strong competition across Europe is a significant acknowledgement for our company DOMESTIC OUTDOOR POOLS Bronze Winner: Progreen from Italy