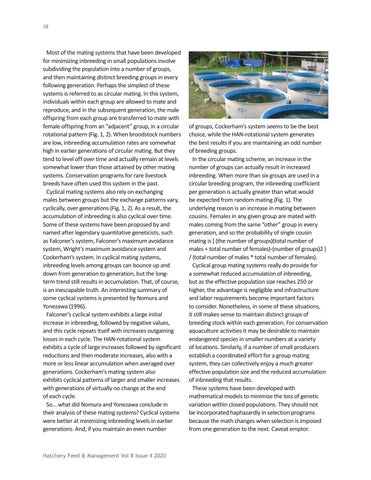 Most of the mating systems that have been developed for minimizing inbreeding in small populations involve subdividing the population into a number of groups, and then maintaining distinct breeding groups in every following generation. Perhaps the simplest of these systems is referred to as circular mating. In this system, individuals within each group are allowed to mate and reproduce, and in the subsequent generation, the male offspring from each group are transferred to mate with female offspring from an “adjacent” group, in a circular rotational pattern (Fig. 1, 2). When broodstock numbers are low, inbreeding accumulation rates are somewhat high in earlier generations of circular mating. But they tend to level off over time and actually remain at levels somewhat lower than those attained by other mating systems. Conservation programs for rare livestock breeds have often used this system in the past. Cyclical mating systems also rely on exchanging males between groups but the exchange patterns vary, cyclically, over generations (Fig. 1, 2). As a result, the accumulation of inbreeding is also cyclical over time. Some of these systems have been proposed by and named after legendary quantitative geneticists, such as Falconer’s system, Falconer’s maximum avoidance system, Wright’s maximum avoidance system and Cockerham’s system. In cyclical mating systems, inbreeding levels among groups can bounce up and down from generation to generation, but the longterm trend still results in accumulation. That, of course, is an inescapable truth. An interesting summary of some cyclical systems is presented by Nomura and Yonezawa (1996). Falconer’s cyclical system exhibits a large initial increase in inbreeding, followed by negative values, and this cycle repeats itself with increases outgaining losses in each cycle. The HAN-rotational system exhibits a cycle of large increases followed by significant reductions and then moderate increases, also with a more or less linear accumulation when averaged over generations. Cockerham’s mating system also exhibits cyclical patterns of larger and smaller increases with generations of virtually no change at the end of each cycle. So… what did Nomura and Yonezawa conclude in their analysis of these mating systems? Cyclical systems were better at minimizing inbreeding levels in earlier generations. And, if you maintain an even number

of groups, Cockerham’s system seems to be the best choice, while the HAN-rotational system generates the best results if you are maintaining an odd number of breeding groups. In the circular mating scheme, an increase in the number of groups can actually result in increased inbreeding. When more than six groups are used in a circular breeding program, the inbreeding coefficient per generation is actually greater than what would be expected from random mating (Fig. 1). The underlying reason is an increase in mating between cousins. Females in any given group are mated with males coming from the same “other” group in every generation, and so the probability of single cousin mating is [ (the number of groups)(total number of males + total number of females)-(number of groups)2 ] / (total number of males * total number of females). Cyclical group mating systems really do provide for a somewhat reduced accumulation of inbreeding, but as the effective population size reaches 250 or higher, the advantage is negligible and infrastructure and labor requirements become important factors to consider. Nonetheless, in some of these situations, it still makes sense to maintain distinct groups of breeding stock within each generation. For conservation aquaculture activities it may be desirable to maintain endangered species in smaller numbers at a variety of locations. Similarly, if a number of small producers establish a coordinated effort for a group mating system, they can collectively enjoy a much greater effective population size and the reduced accumulation of inbreeding that results. These systems have been developed with mathematical models to minimize the loss of genetic variation within closed populations. They should not be incorporated haphazardly in selection programs because the math changes when selection is imposed from one generation to the next. Caveat emptor.