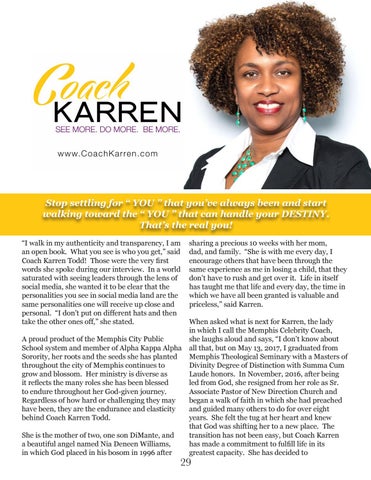 “I walk in my authenticity and transparency, I am an open book. What you see is who you get,” said Coach Karren Todd! Those were the very first words she spoke during our interview. In a world saturated with seeing leaders through the lens of social media, she wanted it to be clear that the personalities you see in social media land are the same personalities one will receive up close and personal. “I don’t put on different hats and then take the other ones off,” she stated. A proud product of the Memphis City Public School system and member of Alpha Kappa Alpha Sorority, her roots and the seeds she has planted throughout the city of Memphis continues to grow and blossom. Her ministry is diverse as it reflects the many roles she has been blessed to endure throughout her God-given journey. Regardless of how hard or challenging they may have been, they are the endurance and elasticity behind Coach Karren Todd. She is the mother of two, one son DiMante, and a beautiful angel named Nia Deneen Williams, in which God placed in his bosom in 1996 after

sharing a precious 10 weeks with her mom, dad, and family. “She is with me every day, I encourage others that have been through the same experience as me in losing a child, that they don’t have to rush and get over it. Life in itself has taught me that life and every day, the time in which we have all been granted is valuable and priceless,” said Karren. When asked what is next for Karren, the lady in which I call the Memphis Celebrity Coach, she laughs aloud and says, “I don’t know about all that, but on May 13, 2017, I graduated from Memphis Theological Seminary with a Masters of Divinity Degree of Distinction with Summa Cum Laude honors. In November, 2016, after being led from God, she resigned from her role as Sr. Associate Pastor of New Direction Church and began a walk of faith in which she had preached and guided many others to do for over eight years. She felt the tug at her heart and knew that God was shifting her to a new place. The transition has not been easy, but Coach Karren has made a commitment to fulfill life in its greatest capacity. She has decided to

This issue is power-packed with Women in Ministry. Xcellence Inc. continues to promote our community leaders and unsung heroes across the country. Here's your opportunity to see some of the women leading the way in both church and marketplace ministry. Connect & Network! 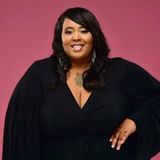