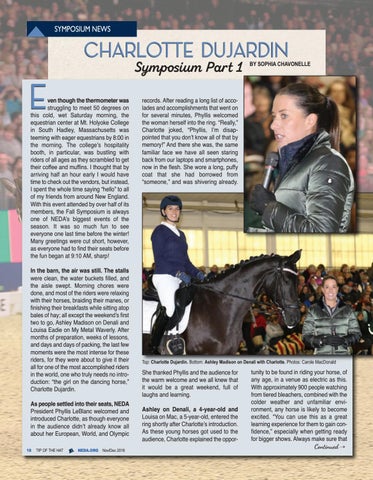 ven though the thermometer was struggling to meet 50 degrees on this cold, wet Saturday morning, the equestrian center at Mt. Holyoke College in South Hadley, Massachusetts was teeming with eager equestrians by 8:00 in the morning. The college’s hospitality booth, in particular, was bustling with riders of all ages as they scrambled to get their coffee and muffins. I thought that by arriving half an hour early I would have time to check out the vendors, but instead, I spent the whole time saying “hello” to all of my friends from around New England. With this event attended by over half of its members, the Fall Symposium is always one of NEDA’s biggest events of the season. It was so much fun to see everyone one last time before the winter! Many greetings were cut short, however, as everyone had to find their seats before the fun began at 9:10 AM, sharp!

In the barn, the air was still. The stalls were clean, the water buckets filled, and the aisle swept. Morning chores were done, and most of the riders were relaxing with their horses, braiding their manes, or finishing their breakfasts while sitting atop bales of hay; all except the weekend’s first two to go, Ashley Madison on Denali and Louisa Eadie on My Metal Waverly. After months of preparation, weeks of lessons, and days and days of packing, the last few moments were the most intense for these riders, for they were about to give it their all for one of the most accomplished riders in the world, one who truly needs no introduction: “the girl on the dancing horse,” Charlotte Dujardin.

As people settled into their seats, NEDA President Phyllis LeBlanc welcomed and introduced Charlotte, as though everyone in the audience didn’t already know all about her European, World, and Olympic

TIP OF THE HAT

records. After reading a long list of accolades and accomplishments that went on for several minutes, Phyllis welcomed the woman herself into the ring. “Really,” Charlotte joked, “Phyllis, I’m disappointed that you don’t know all of that by memory!” And there she was, the same familiar face we have all seen staring back from our laptops and smartphones, now in the flesh. She wore a long, puffy coat that she had borrowed from “someone,” and was shivering already.

She thanked Phyllis and the audience for the warm welcome and we all knew that it would be a great weekend, full of laughs and learning.

Ashley on Denali, a 4-year-old and Louisa on Mac, a 5-year-old, entered the ring shortly after Charlotte’s introduction. As these young horses got used to the audience, Charlotte explained the oppor-

tunity to be found in riding your horse, of any age, in a venue as electric as this. With approximately 900 people watching from tiered bleachers, combined with the colder weather and unfamiliar environment, any horse is likely to become excited. “You can use this as a great learning experience for them to gain confidence,” especially when getting ready for bigger shows. Always make sure that Continued → 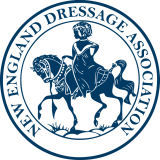