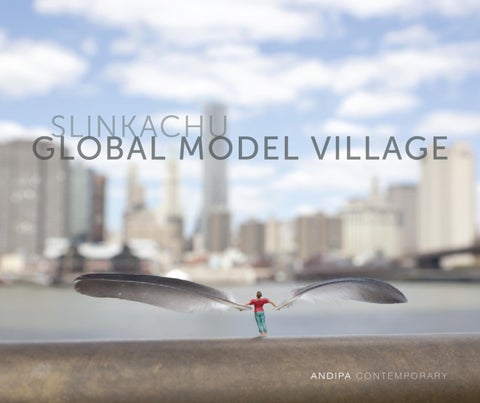 andipa contemporary is proud to announce Global Model Village, installation artist Slinkachu’s third solo show with the gallery, set to coincide with the worldwide publication of his third book of the same title. From new York, Beijing and Moscow to cape Town, Bridgetown and london, Slinkachu has created his ‘little people’ installations within real urban contexts worldwide in a quest to illustrate and highlight our sociological, political and economical plights. The scale of his creations, left in their exterior environments, encourage us to expect the unexpected, to see where normally we do not look; their juxtapositions open up a realm of possibilities and challenge the audience to consider the plight of the everyman. Global Model Village will feature a broad selection of these international works. as Slinkachu has been abandoning these tiny model people on the gritty city streets, left to fend for themselves, his works are documented and presented through the photographic medium. The exhibition features a stunning selection of newly released limited edition prints and installations.

Working his way around the globe, Slinkachu’s miniature installations focus on the common denominators of humankind, the dramas of hope and tragedy, loneliness and humour amongst the millions living in the metropolis. in ‘The Food chain’, tiny ﬁgurines continue their back-breaking work of planting rice in a makeshift manhole paddy ﬁeld, unaware of Beijing’s city life speeding past on the nearby road – a reﬂection on the reality of the labour intensive rice production that keeps the world fed and the workers over-worked and unrewarded... the invisibles working in a street aptly named ‘Gui Jie’ (Ghost Street). Over in cape Town’s District Six, we are party to a treacherous yet joyful looking ‘School Run’; the thumb-sized hopefuls, smartly dressed and heavily laden with books, make their way across a barbed wire tightrope. With bright colours and blue skies, the optimistic wire-slashed image appears an allegorical representation of the sad history of District Six, known for the forced removal of 60,000 inhabitants during the 1970’s apartheid regime.

andipa Gallery has been publishing Slinkachu’s work and representing the artist since 2008. in 2009 Boxtree’s publication “little People in the city: The Street art of Slinkachu” became the best-selling art book in the uk.

For further information please contact the gallery on 020 7589 2371 or by email art@andipa.com.

“The world is going to the dogs. You read about it in the papers every day… The good old days are long gone and the only thing to look forward to is a steady decline, leading to the inevitable apocalypse… But there are more immediate concerns for us, because the train is late and it’s already 8.45 a.m. The baby was awake all night and the kids are bunking oﬀ school. letters from the bank are stacking up, unopened. The view from the oﬃce window is another oﬃce window… and one side of the bed is always empty. and we are all waiting for those days when the sun breaks through the clouds and, for once, the city looks… perhaps not so bad after all... These are the real dramas, this is the real news… Despite all our diﬀerences, this is what unites us, the ‘little people’.” Slinkachu, Global Model Village

Slinkachuâ&#x20AC;&#x2122;s miniature installations focus on the common denominators of humankind, the dramas of hope and tragedy, loneliness and humour amongst the millions living in the metropolis.

The scale of his creations, left in their exterior environments, encourage us to expect the unexpected, to see where normally we do not lookâ&#x20AC;Ś

Each image is available in 3 edition sizes except for ‘hanging On, 2011’ (details below) c-Type Print, Fuji crystal archive paper, signed and numbered

in 2011 Slinkachu had his ﬁrst solo museum exhibition at The kunstverein ludwigsburg, Germany, entitled

The Big city. This year, the artist has participated in shows at The V&a (unbuilt, V&a late), the courtauld institute of art

(East Wing X: Material Matters), You are here, a solo show and outdoor event in antwerp and Megacool 4: Youth and art, a group show in künstlerhaus Vienna. in May, Slinkachu showcased his work alongside other well-known street artists such as Blu, invader and Dolk in the PORi art museum in Finland titled Street art – The new Generation. named as one of the leading ﬁgures in urban art by Patrick nguyen and Stuart Mackenzie in Beyond the Street (2010), Slinkachu’s works in concrete Ocean (second solo show at andipa) aﬃrmed his position and followed the artist’s internationally acclaimed little People Project in 2008 and his ﬁrst publication – little People in the city:

The Street art of Slinkachu (Boxtree, 2008), with a foreword by author Will Self – the biggest-selling art book of 2009 in the uk. Slinkachu’s participation in Tunnel-228, produced by Punchdrunk and actor and Old Vic artistic Director kevin Spacey underneath Waterloo Station in 2009, preceded a highly successful exhibition Extraordinary Measures at Belsay hall, northumberland where he showed alongside Ron Mueck, Matt collishaw and Mariele neudecker during the summer of 2010. The show, in which the artist took a humorous look "at the obsession we have with the day trip, that English hobby which often provokes the full range of emotions", saw a record-breaking 55,000 visitors. lebowski Publishers launched his second book, Big Bad city, in amsterdam in September 2010. 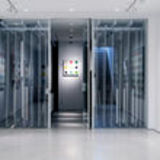 e-catalogue of Slinkachu's 2012 exhibition at Andipa Contemporary in London and New York.

e-catalogue of Slinkachu's 2012 exhibition at Andipa Contemporary in London and New York.