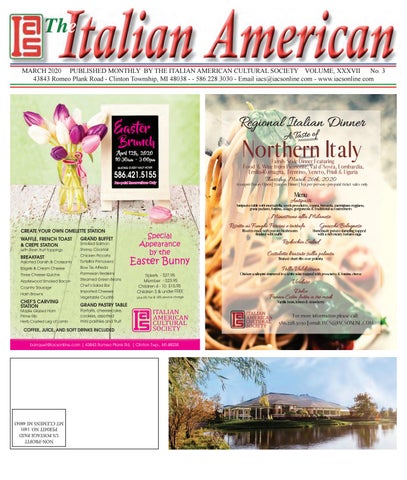 Regional Italian Dinner A Taste of

GIOVANNI LOIACONO As we approach the third month of 2020, I find myself pondering over the ideas, educational and cultural programs, fundraising, and entertainment events the IACS undertook over the course of last year. For me, it is a privilege and honor to resume my role as President of this great organization, the Italian American Cultural Society. Everything we have achieved is an acknowledgement to the dedication and hard work from our distinguished board of directors, proficient IACS and IACS banquet staff, and the participation of the IACS membership. Scheduled in the month of March are favorite fundraising events you will want to attend; the annual Feast of St. Joseph, Northern Italy regional dinner, St. Patrick’s bingo bash, and Tutti Al Cinema – an Italian movie night. I’d like to welcome all new members and urge your involvement this year not only as attendees to events but also as a source for volunteering services on a committee. Don’t hesitate to contact me or any of our board members for more information.

ESTHER BEAUDETTE March has many special dates; i.e. March 10th, change your clocks – it’s the start of Daylight Savings Time; March 17th, St. Patrick’s Day when everyone becomes a little Irish; March 19th, Feast of St. Joseph when special food is prepared to celebrate his special day; March 20th at 5:58 pm the wonderful season of spring begins. Are you ready for a fun day away? Sign up to go to Gateway Starlight Casino in Sarnia, Ontario, Canada on March 21st; cost is $20. We will receive $25 on arrival to play on the machines. Our bus will leave the Cultural Center at 8:45 am. We will make a stop at the duty free store on the return trip home. Proper ID is needed to cross the border – call Esther at 586-286-2597 to sign up to attend this trip. Enjoy each day, for each day is a gift! Esther

The Council of Presidents wish to thank all the participating Italian American organizations for entrusting this group to represent them for the next two years.

www.iacsonline.com Deadline for submitting material is the 10th of the month. We reserve the right to edit all copy. The Italian American is published monthly by the Italian American Cultural Society At 43843 Romeo Plank Rd., Clinton Township, MI 48038.

IACS ELECTS BOARD MEMBERS, PRESIDENT, AND EXECUTIVE COMMITTEE On January 27, 2020, the IACS Board of Directors assembled for its first meeting to elect a president and executive committee for 2020. Giovanni LoIacono was elected to another term as president. Officers on the IACS Executive Committee: First Vice-president

IACS Board of Directors Elected to Three-Year Terms L-R: Giovanni (John) Ciraulo, Giovanni Maniaci, Rosanna Maniaci, Rose Orlando, David Buscaino, and Teria DeLorenzo. Also elected to the Board but not in the photo is Alfonso Chirco.

WHAT A BLAST! Great Turn Out at the IACS Valentine's Day Dueling Pianos Event!

Thank you to all who came and celebrated love with us. After dinner, the Mobile Dueling Pianos pianists, George & Frank, had the whole room singing, clapping, and laughing together! There were lots of couples and large groups. It was such a fun time for everyone. We received many compliments on the event as a whole but especially the food and dessert. A special thank you to Kris Kosky, Katie Berry, and Alex & Charity Lozovoj for putting the event together and decorating the room so beautifully. Weâ&#x20AC;&#x2122;re really hoping to do this again next year, and hope youâ&#x20AC;&#x2122;ll join us!

We Take All Major Insurances.

Our Mission Is... -To plan, promote and carry on charitable, educational, and cultural activities, which serve the welfare of the community. -To preserve traditional Italian culture by sponsoring lectures, classes, conferences and study groups devoted to contributions made to the world by Italians. -To compassionately counsel and assist indigent persons dealing with personal, family, or community problems by direct services or referral to appropriate agencies. -To carry on human relation activities on a charitable basis for the purposes of eliminating bias, prejudice, or discrimination affecting all Americans.

Family was everything to Yolanda, and she devoted her life to her husband Joe, whom she was married for 50 years, her three children and their spouses, grandchildren, and great grandchildren. Yolanda was born in Detroit on August 10, 1925 to Angela (Allegrati) and Emil Airoldi, who immigrated to the U.S. from San Antonino, Italy, a small town, north of Milan (Lombardy region). She is preceded in death by her husband Joseph, her sister Henrietta and brother-in-law Clarence Cereska, and her sister Mary Airoldi; and survived by her children Paul Garavaglia (Cathy LaDuke), Alan Garavaglia (Susan), and Mark Garavaglia (Marilyn), five grandchildren, and two great grandchildren, several nieces, nephews, great nieces, and great nephews. Yolanda was a member of the Lombardi Women’s Society of Detroit group and the rapport club at St. Jude’s Catholic Church in Detroit, and she was also a member of the senior’s group of Clinton Township. She was a member of San Francesco

be missed. The service date and time will be determined in the spring.

Sam was born in Reed, PA, the 11th of 12 children, born to Carmella and Joseph Gallo. He was a TEC5 during WWII. He was the beloved husband of the late Rose for 75 years. Loving father of Tom Gallo and Pat (Brian) Bernieri. Grandfather of twin girls. He is also remembered by his sister Florence Salamino, many loving nieces, nephews, great-nieces and great-nephews. During his younger years, Sam was quite athletic. He played ball in Detroit for many years. He also enjoyed golfing and bowling in his later years, in Michigan, as well as around his former home in Largo, Florida. Sam’s kindness and generosity will

Michelle, Maryanne and proud great grandmother of 12. Eleanor was a devote Catholic and everything she did was for her children, grandchildren and great grandchildren. Visitation Wednesday, January 8 from 3pm to 9pm with a 7pm Scripture at Bagnasco & Calcaterra Funeral Home, 13650 E. 15 Mile Road, Sterling Heights. Instate Thursday, January 9 at 10:30am until the time of Mass 11am at St. Malachy Catholic Church, 14085 E. 14 Mile Road, Sterling Heights. Interment at White Chapel Cemetery, Troy.

A memorial luncheon oﬀers us an opportunity to celebrate the life of our departed loved ones while enjoying a meal with family and friends. With that in mind, the Italian American Cultural Society Banquet & Conference Center oﬀers a lovely setting to end a diﬃcult day. Memorial Packages: Buﬀet - $17.95 Family-Style $21.95

STEVEN ARCILESI Age 91 January 6, 2020 Loving brother of Casper Arcilesi and Pauline Scaglione. Preceded in death by parents Vincenza and Vito (Mamie) and siblings Joe, Jim, Joseph, Nick and Norman. He is loved and missed by many nieces and nephews and dear friend Sam Promesso. Steven proudly served in the Korean War and retired from the Ford Sterling Plant. Interment at Resurrection Cemetery. Memorial contributions may be made to Disabled American Veterans, PO Box 14301 Cincinnati, OH 45250, www. dav.org. Share a memory at www.bcfhsterlingheights. com.

Beloved daughter of the late Siro and Carolina. Loving mother of Lawrence (Barbara) Vogt and Carolyn McInnes. Proud grandmother of Jeffrey (Julie) Vogt and Christina (Michael) Vanus. Great grandmother of Alden, Brenden, Camren, Andrew and Allison. Dear sister of Caroline Morin, Virgilio DeLorenzo and the late Tancredi DeLorenzo. Memorial Gathering, January 25, 2020 at the Sterling Heights Chapel of Bagnasco & Calcaterra Funeral Home 10:00 AM until time of service at 11:30 AM. In lieu of flowers donations can be made to the Michigan Humane Society and are appreciated by family.

If an IACS member has passed away, is in the hospital, or is going through a difficult time, we would like to be informed and extend our support. In the case of death, the family may wish to get in touch with the IACS office to submit a small bio of the deceased member, (a memorial to celebrate his/her life), funeral details, and a photo. It will be printed in the next Italian American newspaper, based on printing deadlines.

Spring Back to Life at

Call Today For Our Latest Specials And Schedule Your Personal Tour