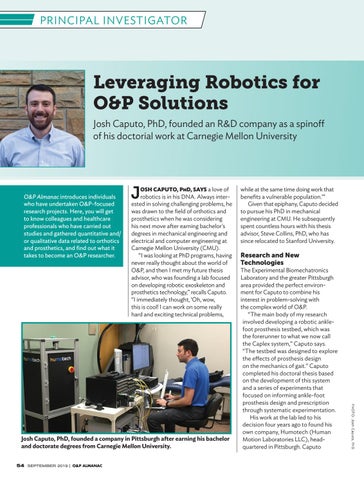 Leveraging Robotics for O&P Solutions Josh Caputo, PhD, founded an R&D company as a spinoff of his doctorial work at Carnegie Mellon University

O&P Almanac introduces individuals who have undertaken O&P-focused research projects. Here, you will get to know colleagues and healthcare professionals who have carried out studies and gathered quantitative and/ or qualitative data related to orthotics and prosthetics, and find out what it takes to become an O&P researcher.

robotics is in his DNA. Always interested in solving challenging problems, he was drawn to the field of orthotics and prosthetics when he was considering his next move after earning bachelor’s degrees in mechanical engineering and electrical and computer engineering at Carnegie Mellon University (CMU). “I was looking at PhD programs, having never really thought about the world of O&P, and then I met my future thesis advisor, who was founding a lab focused on developing robotic exoskeleton and prosthetics technology,” recalls Caputo. “I immediately thought, ‘Oh, wow, this is cool! I can work on some really hard and exciting technical problems,

The Experimental Biomechatronics Laboratory and the greater Pittsburgh area provided the perfect environment for Caputo to combine his interest in problem-solving with the complex world of O&P. “The main body of my research involved developing a robotic anklefoot prosthesis testbed, which was the forerunner to what we now call the Caplex system,” Caputo says. “The testbed was designed to explore the effects of prosthesis design on the mechanics of gait.” Caputo completed his doctoral thesis based on the development of this system and a series of experiments that focused on informing ankle-foot prosthesis design and prescription through systematic experimentation. His work at the lab led to his decision four years ago to found his own company, Humotech (Human Motion Laboratories LLC), headquartered in Pittsburgh. Caputo

Josh Caputo, PhD, founded a company in Pittsburgh after earning his bachelor and doctorate degrees from Carnegie Mellon University.

while at the same time doing work that benefits a vulnerable population.’” Given that epiphany, Caputo decided to pursue his PhD in mechanical engineering at CMU. He subsequently spent countless hours with his thesis advisor, Steve Collins, PhD, who has since relocated to Stanford University.