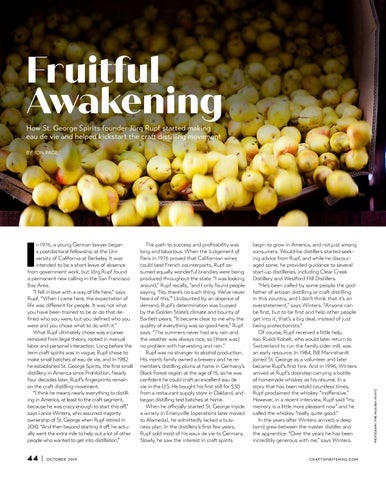 n 1976, a young German lawyer began a postdoctoral fellowship at the University of California at Berkeley. It was intended to be a short leave of absence from government work, but Jörg Rupf found a permanent new calling in the San Francisco Bay Area. “I fell in love with a way of life here,” says Rupf. “When I came here, the expectation of life was different for people. It was not what you have been trained to be or do that defined who you were, but you defined who you were and you chose what to do with it.” What Rupf ultimately chose was a career removed from legal theory, rooted in manual labor and personal interaction. Long before the term craft spirits was in vogue, Rupf chose to make small batches of eau de vie, and in 1982 he established St. George Spirits, the first small distillery in America since Prohibition. Nearly four decades later, Rupf’s fingerprints remain on the craft distilling movement. “I think he means nearly everything to distilling in America, at least to the craft segment, because he was crazy enough to start this off,” says Lance Winters, who assumed majority ownership of St. George when Rupf retired in 2010. “And then beyond starting it off, he actually went the extra mile to help out a lot of other people who wanted to get into distillation.”

The path to success and profitability was long and laborious. When the Judgement of Paris in 1976 proved that Californian wines could best French counterparts, Rupf assumed equally wonderful brandies were being produced throughout the state. “I was looking around,” Rupf recalls, “and I only found people saying, ‘No, there’s no such thing. We’ve never heard of this.’” Undaunted by an absence of demand, Rupf’s determination was buoyed by the Golden State’s climate and bounty of Bartlett pears. “It became clear to me why the quality of everything was so good here,” Rupf says. “The summers never had any rain and the weather was always nice, so [there was] no problem with harvesting and rain.” Rupf was no stranger to alcohol production. His mom’s family owned a brewery and he remembers distilling plums at home in Germany’s Black Forest region at the age of 15, so he was confident he could craft an excellent eau de vie in the U.S. He bought his first still for $30 from a restaurant supply store in Oakland, and began distilling test batches at home. When he officially started St. George inside a winery in Emeryville (operations later moved to Alameda), he admittedly lacked a business plan. In the distillery’s first few years, Rupf sold most of his eaux de vie to Germany. Slowly, he saw the interest in craft spirits

begin to grow in America, and not just among consumers. Would-be distillers started seeking advice from Rupf, and while he discouraged some, he provided guidance to several start-up distilleries, including Clear Creek Distillery and Westford Hill Distillers. “He’s been called by some people the godfather of artisan distilling or craft distilling in this country, and I don’t think that it’s an overstatement,” says Winters. “Anyone can be first, but to be first and help other people get into it, that’s a big deal, instead of just being protectionists.” Of course, Rupf received a little help, too. Ruedi Kobelt, who would later return to Switzerland to run the family cider mill, was an early resource. In 1984, Bill Mannshardt joined St. George as a volunteer and later became Rupf’s first hire. And in 1996, Winters arrived at Rupf’s doorstep carrying a bottle of homemade whiskey as his résumé. In a story that has been retold countless times, Rupf proclaimed the whiskey “inoffensive.” However, in a recent interview, Rupf said “my memory is a little more pleasant now” and he called the whiskey “really quite good.” In the years after Winters arrived, a deep bond grew between the master distiller and the apprentice. “Over the years he has been incredibly generous with me,” says Winters.