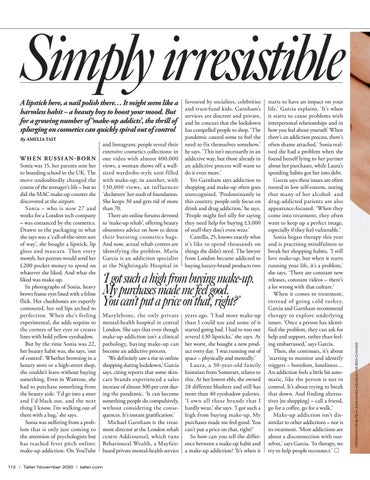 A lipstick here, a nail polish there… It might seem like a harmless habit – a beauty buy to boost your mood. But for a growing number of ‘make-up addicts’, the thrill of splurging on cosmetics can quickly spiral out of control By AMELIA TAIT

W H E N RU S S I A N B O R N Sonia was 15, her parents sent her to boarding school in the UK. The move undoubtedly changed the course of the teenager’s life – but so did the MAC make-up counter she discovered at the airport. Sonia – who is now 27 and works for a London tech company – was entranced by the cosmetics. Drawn to the packaging in what she says was a ‘call-of-the-siren sort of way’, she bought a lipstick, lip gloss and mascara. Then every month, her parents would send her £200 pocket money to spend on whatever she liked. And what she liked was make-up. In photographs of Sonia, heavy brows frame eyes lined with a feline flick. Her cheekbones are expertly contoured, her red lips arched to perfection. When she’s feeling experimental, she adds sequins to the corners of her eyes or creates lines with bold yellow eyeshadow. But by the time Sonia was 22, her beauty habit was, she says, ‘out of control’. Whether browsing in a luxury store or a high-street shop, she couldn’t leave without buying something. Even in Waitrose, she had to purchase something from the beauty aisle. ‘I’d go into a store and I’d black out, and the next thing I know, I’m walking out of there with a bag,’ she says. Sonia was suffering from a problem that is only just coming to the attention of psychologists but has reached fever pitch online: make-up addiction. On YouTube 112

and Instagram, people reveal their extensive cosmetics collections: in one video with almost 400,000 views, a woman shows off a wallsized wardrobe-style unit filled with make-up; in another, with 130,000 views, an inf luencer ‘declutters’ her stash of foundation. She keeps 30 and gets rid of more than 70. There are online forums devoted to ‘make-up rehab’, offering beauty obsessives advice on how to detox their bursting cosmetics bags. And now, actual rehab centres are identifying the problem. Maria Garcia is an addiction specialist at the Nightingale Hospital in

favoured by socialites, celebrities and trust-fund kids. Garnham’s services are discreet and private, and he concurs that the lockdown has compelled people to shop. ‘The pandemic caused some to feel the need to fix themselves somehow,’ he says. ‘This isn’t necessarily in an addictive way, but those already in an addictive process will want to do it even more.’ Yet Garnham says addiction to shopping and make-up often goes unrecognised. ‘Predominantly in this country, people only focus on drink and drug addiction,’ he says. ‘People might feel silly for saying they need help for buying £3,000 of stuff they don’t even wear.’ Camilla, 25, knows exactly what it’s like to spend thousands on things she didn’t need. The lawyer from London became addicted to buying luxury-brand products two

‘I got such a high from buying make-up. My purchases made me feel good. You can’t put a price on that, right?’ Marylebone, the only private mental-health hospital in central London. She says that even though make-up addiction isn’t a clinical pathology, buying make-up can become an addictive process. ‘We definitely saw a rise in online shopping during lockdown,’ Garcia says, citing reports that some skincare brands experienced a sales increase of almost 300 per cent during the pandemic. ‘It can become something people do compulsively, without considering the consequences. It’s instant gratification.’ Michael Garnham is the treatment director at the London rehab centre Addcounsel, which runs Behavioural Wealth, a Mayfairbased private mental-health service

years ago. ‘I had more make-up than I could use and some of it started going bad. I had to toss out several £30 lipsticks,’ she says. At her worst, she bought a new product every day. ‘I was running out of space – physically and mentally.’ Laura, a 30-year-old family historian from Somerset, relates to this. At her lowest ebb, she owned 28 different blushers and still has more than 40 eyeshadow palettes. ‘I own all these brands that I hardly wear,’ she says. ‘I got such a high from buying make-up. My purchases made me feel good. You can’t put a price on that, right?’ So how can you tell the difference between a make-up habit and a make-up addiction? ‘It’s when it

starts to have an impact on your life,’ Garcia explains. ‘It’s when it starts to cause problems with interpersonal relationships and in how you feel about yourself. When there’s an addiction process, there’s often shame attached.’ Sonia realised she had a problem when she found herself lying to her partner about her purchases, while Laura’s spending habits got her into debt. Garcia says these issues are often rooted in low self-esteem, noting that many of her alcohol- and drug-addicted patients are also appearance-focused. ‘When they come into treatment, they often want to keep up a perfect image, especially if they feel vulnerable.’ Sonia began therapy this year and is practising mindfulness to break her shopping habits. ‘I still love make-up, but when it starts running your life, it’s a problem,’ she says. ‘There are constant new releases, constant videos – there’s a lot wrong with that culture.’ When it comes to treatment, instead of going cold turkey, Garcia and Garnham recommend therapy to explore underlying issues. ‘Once a person has identified the problem, they can ask for help and support, rather than feeling embarrassed,’ says Garcia. Then, she continues, it’s about ‘starting to monitor and identify triggers – boredom, loneliness… An addiction feels a little bit automatic, like the person is not in control. It’s about trying to break that down. And finding alternatives [to shopping] – call a friend, go for a coffee, go for a walk.’ Make-up addiction isn’t dissimilar to other addictions – nor is its treatment. ‘Most addictions are about a disconnection with ourselves,’ says Garcia. ‘In therapy, we try to help people reconnect.’ (

PHOTOGRAPH: IRVIN PENN. SOME NAMES AND AGES HAVE BEEN CHANGED