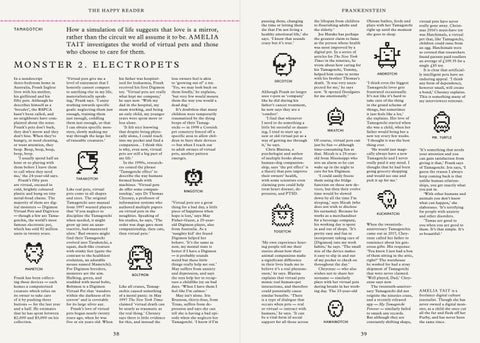 How a simulation of life suggests that love is a mirror, rather than the circuit we all assume it to be. A M E L I A TA I T investigates the world of virtual pets and those who choose to care for them.

pausing them, changing the time or letting them die that I’m not living a healthy emotional life,’ she says. ‘I know that sounds crazy but it’s true.’

MONSTER 2. EL ECTROPETS In a nondescript three-bedroom home in Australia, Frank Inglese lives with his mother, his girlfriend and his fifty pets. Although he describes himself as a ‘breeder’, the RSPCA hasn’t been called, and no neighbours have complained about the noise. Frank’s pets don’t bark, they don’t meow and they don’t hiss. When they’re hungry, or need cleaning, or want attention, they beep. Beep, beep, beep, beep, beep. ‘I usually spend half an hour or so playing with them before I leave them to call when they need me,’ the 24-year-old says. Frank’s fifty pets are virtual, encased in cold, brightly coloured plastic and hung on tiny metal-bead chains. The majority of them are digital monsters — Digimon Virtual Pets and Digivices — though a few are Tamagotchis, the world’s most famous electronic pet, which has sold 82 million units in twenty years.

Frank has been collecting these devices — each homes a computerised creature which relies on its owner to take care of it by pushing three buttons — for the last year and a half. He estimates that he has spent between $2,000 and $3,000 on his collection.

Like real pets, virtual pets come in all shapes and sizes. The original Tamagotchi user manual from 1997 warned players that ‘if you neglect to discipline the Tamagotchi when needed, it might grow up into an unattractive, bad-mannered alien.’ Bad owners might find their Tamagotchi evolved into Tarakotchi, a squat, duck-like creature with stinky feet (quite the contrast to the healthiest evolution, an adorable mouse named Mametchi). For Digimon breeders, monsters are the aim. Hulking, green, and studded with metal bolts, Boltmon is a Digimon Virtual Pet that ‘wanders within the darkness of its sorrow’ and is covetable for its large silver axe. Frank’s love of virtual pets began nearly twenty years ago, when he was five or six years old. When

his father was hospitalised for leukaemia, Frank received his first Digimon toy. ‘Virtual pets are really what kept me company,’ he says now. ‘With my dad in the hospital, my mum working, and being an only child, my younger years were spent more or less alone. ‘It felt nice knowing that despite being physically alone, I could reach into my pocket and find a companion... I think this is why, even now, virtual pets are still a big part of my life.’ In the 1990s, researchers coined the phrase ‘Tamagotchi effect’ to describe the way humans formed bonds with machines. ‘Virtual pets do offer some companionship,’ says Dr Thomas Chesney, a professor of information systems who authored multiple papers on virtual pets in the noughties. Speaking of his studies, he says, ‘The order was dogs gave most companionship, then cats, then virtual pets.’

Like all crazes, Tamagotchis caused something of a moral panic: in May 1997 The New York Times claimed ‘virtual death can be nearly as traumatic as the real thing.’ Chesney says there is little evidence for this, and instead the

loss owners feel is akin to ‘growing out of’ a toy. ‘Yes, we may look back on them fondly,’ he explains, ‘but very few would mourn them the way you would a dead dog.’ It’s doubtless that many children were temporarily traumatised by the dying beeps of their Tamagotchi — in 1998 a Cornish pet cemetery fenced off a specific area to allow children to bury their devices — but when I reach out to adult owners of virtual pets, another pattern emerges.

‘Virtual pets are a great thing for a bad day, a little piece of happiness when hope is lost,’ says May Fisher-Guest, a 25-yearold Digimon player, also from Australia. As a ‘naughty kid’ she found Digimon helped her behave. ‘It’s the same as now, my mental state is better if I have a Digimon — it probably sounds weird but these little things really help me out.’ May suffers from anxiety and depression, and says the toys help her to recapture a childlike joy on bad days. ‘When I have them I feel like I’m calmer.’ May isn’t alone. Iris Brunson, thirty-four, from Texas, suffers from depression and says she can tell she is having a bad episode when she neglects her Tamagotchi. ‘I know if I’m

Although Frank no longer uses v-pets as ‘company’ like he did during his father’s cancer treatment, he now says they are a ‘comfort’. ‘I find that whenever I need to do something a little bit stressful or daunting, I tend to start up a new or old virtual pet as a way of getting me through it,’ he says. Chris Blazina, a psychologist and author of multiple books about human–dog companionship, says ‘the pet effect’ is a theory that pets improve their owners’ health, with some scientists even claiming pets could help treat heart disease, depression, and PTSD.

‘My own experience hearing people tell me their stories about how their animal companions make a significant difference in their lives leads me to believe it’s a real phenomenon,’ he says. Blazina explains that virtual pets mimic real human–pet interactions, and therefore could potentially cause similar benefits. ‘There is a type of dialogue that occurs when pets — real or virtual — interact with humans,’ he says. ‘It can be a vital form of social support for all those across

the lifespan from children to f lourishing adults and the elderly.’ Joe Hutsko has perhaps the greatest claim to fame as the person whose health was most improved by a digital pet. In a series of articles for The New York Times in the nineties, he wrote about how caring for his Tamagotchi, Tommy, helped him come to terms with his brother Thomas’s death. ‘It was very unexpected for me,’ he says now. ‘It opened f loodgates for me emotionally.’

Of course, virtual pets can just be fun — although time-consuming fun at that. Micah is a 25-yearold from Mississippi who sets an alarm so he can wake up in the night to care for his Digimon. ‘I could easily freeze them using the fridge function on these new devices, but then their evolve time would be slowed down by all the time I’m sleeping,’ says Micah (who does not wish to disclose his surname). Because he works as a merchandiser for a beverage company, his working day is spent in and out of shops. ‘It’s pretty easy and fun to incorporate taking care of [Digimon] into my work habits,’ he says. ‘The small size of the device makes it easy to slip in and out of my pocket to check on throughout the day.’ Cheyenne — who also wishes not to share her surname — similarly plays with her virtual pets during breaks in her working day. The 23-year-old

Ohioan bathes, feeds and plays with her Tamagotchi right up until the moment she goes to sleep.

‘I think even the biggest Tamagotchi lover gets frustrated occasionally. It’s not like it’s hard to take care of the thing in the grand scheme of things, but sometimes it just feels like a lot,’ she explains. Her love of Tamogotchi started when she was a child, when her father would bring her a new toy every few weeks. ‘I thought it was the best thing ever. ‘He would just magically always have a new Tamagotchi and I never really paid it any mind. I thought that he had been going grocery shopping and would see one and pick it up for me.’

When the twentiethanniversary Tamagotchis came out in 2017, Cheyenne called her father to reminisce about his generous gifts. His response: ‘You know I just had a box of them sitting in the attic, right?’ The warehouse he worked for had a stray shipment of Tamagotchi that were never claimed. ‘Well played, Dad,’ Cheyenne says now. The twentieth-anniversary Tamagotchi did not reignite the nineties craze, and a recently released app — My Tamagotchi Forever — similarly failed to smash any records. But although they are constantly shifting shape,

virtual pets have never really gone away. Christmas 2016’s must-have toy was Hatchimals, a virtual pet that, like Tamagotchi, children could raise from an egg. Hatchimals were so coveted that researchers found parents paid resellers an average of £109.35 for a single £45 toy. It is clear that artificially intelligent pets have an enduring appeal. ‘I think any form of dependency, however small, will create a bond,’ Chesney explains. This is something many of my interviewees reiterate.

‘It’s something that needs your attention and you can gain satisfaction from giving it that,’ Frank says of Tamagotchi. Iris says, ‘I guess the reason I always keep coming back is that unlike human relationships, you get exactly what you put in. ‘With other humans and animals you don’t know what can happen,’ she elaborates. ‘It’s terrifying for people with anxiety and other disorders. ‘Tamas are good to you when you are good to them. It’s that simple. It’s so beautiful.’

A M E L I A TA I T is a freelance digital culture journalist. Though she has never owned a digital monster, as a child she once cut all the fur and f lesh off her Furby, and has never been the same since.