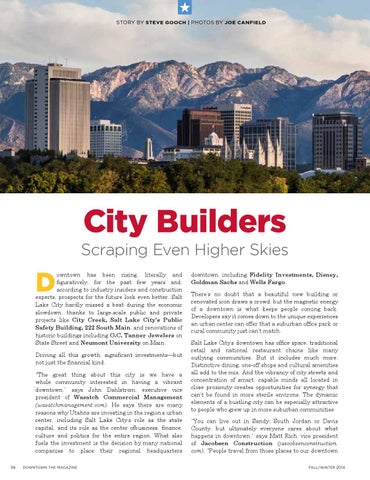 owntown has been rising, literally and figuratively, for the past few years and, according to industry insiders and construction experts, prospects for the future look even better. Salt Lake City hardly missed a beat during the economic slowdown, thanks to large-scale public and private projects like City Creek, Salt Lake City’s Public Safety Building, 222 South Main, and renovations of historic buildings including O.C. Tanner Jewelers on State Street and Neumont University on Main. Driving all this growth: significant investments—but not just the financial kind. “The great thing about this city is we have a whole community interested in having a vibrant downtown,” says John Dahlstrom, executive vice president of Wasatch Commercial Management (wasatchmanagement.com). He says there are many reasons why Utahns are investing in the region’s urban center, including Salt Lake City’s role as the state capital, and its role as the center ofbusiness, finance, culture and politics for the entire region. What also fuels the investment is the decision by many national companies to place their regional headquarters

downtown, including Fidelity Investments, Disney, Goldman Sachs and Wells Fargo. There’s no doubt that a beautiful new building or renovated icon draws a crowd, but the magnetic energy of a downtown is what keeps people coming back. Developers say it comes down to the unique experiences an urban center can offer that a suburban office park or rural community just can’t match. Salt Lake City’s downtown has office space, traditional retail and national restaurant chains like many outlying communities. But it includes much more. Distinctive dining, one-off shops and cultural amenities all add to the mix. And the vibrancy of city streets and concentration of smart, capable minds all located in close proximity creates opportunities for synergy that can’t be found in more sterile environs. The dynamic elements of a bustling city can be especially attractive to people who grew up in more suburban communities. “You can live out in Sandy, South Jordan or Davis County, but ultimately everyone cares about what happens in downtown,” says Matt Rich, vice president of Jacobsen Construction (jascobsenconstruction. com), “People travel from those places to our downtown fall / winter 2014