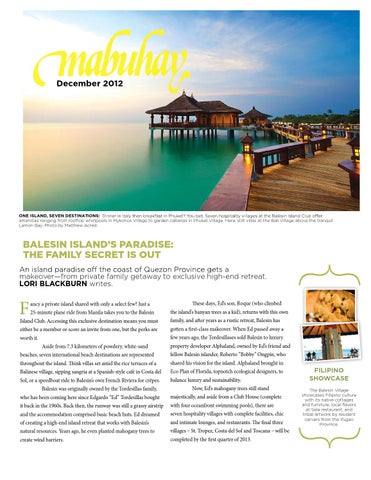 BALESIN ISLAND’S PARADISE: THE FAMILY SECRET IS OUT An island paradise off the coast of Quezon Province gets a

family, and after years as a rustic retreat, Balesin has

Aside from 7.3 kilometers of powdery, white-sand

Except for onsite ecofriendly transportation, cars

DOPPELGÄNGERS: (BELOW) The Mykonos Village calls to mind the picturesque island of Mykonos, one of the world’s best-known islands. (RIGHT) The Bali Warung captures the flavors of Bali with Indonesian food and decorative pieces sourced from the island.

Except for onsite ecofriendly transportation, cars aren’t allowed on the island, so explore by horseback, mountain bike, or even calesa—a small Spanish-style horse carriage. Electric golf carts zip down jungle paths that weave around trees rather than cutting through them. Here, design flows with nature. To preserve Balesin, only 50 out of 500 hectares will be developed while 80% of coral reefs and rainforests are protected. Organic gardens and aquaculture farms (which raise marine life such as lobsters, mussels, and groupers) provide seasonal produce. So what sets Balesin apart from other island resorts? Roque explains: “Very few island resorts have their own private airport and can match Balesin’s class and standard. Imagine, soon a member shall be able to board a flight in Hong Kong, land in Balesin, and literally walk off the plane to Balesin’s pristine beach.” This, together with natural and developed beauty and spectacular villages, come together for what Roque calls the “Balesin Experience.” “There is nothing like it in the world,” he says. Balesin has something for everyone. Roque’s favorite activities FAMILY FUN: Activities range from archery lessons at the state-of-the-art Sports Center, to wellness in Zen-inspired spa suites, to horseback riding on the beach.

many years, is also a favorite. His wife Maritoni, a former professional ballerina, loves staying at the Balinese water villas which hover above the sea. “This is where special memories are shared,” Maritoni says.

INDULGENCE: With 7.3 kilometers of powdery whitesand beaches, Balesin invites you to play. Scuba diving, snorkeling, wake boarding, and kitesurfing are all available. So are long walks on the beach. Photo by Bubuy Balangue.

“Seeing our kids enjoy the island today as much as they did back when it was not developed only shows that Alphaland is on the right track.” Their son, 14-year-old Emilio, likes eating at the Club House restaurant. He’d be most excited to show his friends the equestrian and paintball centers. His 8-year-old sister Tessa enjoys the swimming pools at the Phuket Village where white-sand beaches stretch into a cerulean sea. Membership limits occupancy to maintain a balance between human development and nature, while guaranteeing a high standard of service and giving members a sense of belonging and home. Quezon Province, where Balesin Island is located, was named after the second president of the Philippines, Manuel L. Quezon, who was born in Aurora, then a part of the province.

It also gets you 14 complimentary nights a year. Getting there is a breeze since Balesin’s new runway accommodates international flights, private jets, and the island’s own nineseater Cessna Grand Caravan planes. Those arriving on the Cessnas can enjoy attentive service at a luxurious private hangar in Manila with complimentary refreshments. Balesin’s unique experiences leave lasting impressions. As Roque remarks: “One thing I can guarantee is leaving will be difficult and the yearning to return will always be there. I know because that’s how it’s been for me practically all my life. I too have my own unique ‘Balesin Experience’—but that’s for another interview.” Interested? Log on to www.balesin.com.

LOCO OVER COCO: Quezon Province is also known for its lambanog, potent liquor made from the fermented sap of coconut flowers. 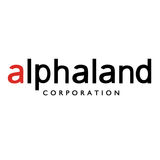