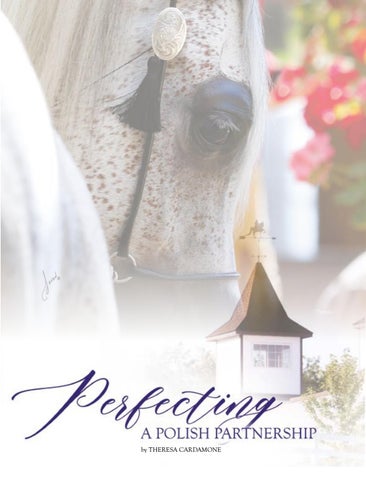 *Perfirka at her original home in Poland.

When a few forward-thinking American breeders forged relationships with the Polish State Stud back in the mid-20th century, there was no guarantee their gamble would pay off. Not only were the two countries unaligned politically, making it difficult for any deals to occur, but shipping horses around the world was also sketchy at best in those days. But pay off it did, and Arabian horse breeding was changed forever.

For example, it took tremendous persistence, finesse, and trust for Dr. Eugene LaCroix and his family to purchase eventual U.S. National Champions *Bask and Prowizja (among others) for their Lasma Arabians. (*Baskâ&amp;#x20AC;&amp;#x2122;s record as a show horse and influence as a sire is legendary; Prowizja was U.S. National Champion Park and dam to four national champions.) Lasma, and other pioneer

*Perfirka was purchased by the Ames Family at the Pride of Poland auction.

breeders, changed the landscape of the Arabian industry forever and laid the groundwork for future collaborations.

In recent years, the Ames family of Cedar Ridge Farm, Minnesota, teamed with David Boggs and Midwest Training Centre to create a modern partnership with Poland. Boggs had already formed a connection by negotiating deals that sent U.S.-bred multi-national champion Vitorio TO abroad to stand at the State Studs on a lease. At the same time, Polish, European, and World Champion Junior Mare, Wieza Mocy, came to America. Led by David Boggs, Wieza Mocy dazzled by earning the American “Triple Crown” of halter competition; championships at the Arabian Breeders World Cup (ABWC), Scottsdale, and the United States Nationals for lessee Oak Ridge Arabians.

Boggs also managed the lease of Polish National Champion Junior Stallion Pogrom from Janów Podlaski State Stud. The pair lit the American show world on fire, winning a Triple Crown that included two United States National Champion titles. When an embryo of Pogrom and Wieza Mocy became available, Cedar Ridge Farm was quick to make the purchase. The resulting filly, Wieza Bella, is everything they had hoped for and has earned two U.S. National top ten titles to date.

Dick, Lollie, and Lara Ames had developed a deep appreciation of Polish breeding through *Bask and his impact, especially on the English performance genre. Bella’s success sparked their desire to add more contemporary Polish bloodlines to the Cedar

Ridge breeding program. “It started when we took a trip to Poland with Gene LaCroix, Scott Benjamin and Anette Madsen,” Lara relates. “We toured all the stud farms. When we got to Bialka, it was a rainy day. We saw, from a distance, a stunningly beautiful grey mare in the mist. That was Perfirka. We fell in love with her and couldn’t stop talking about her. We later found out that she was going to be in the auction, so of course, that was super-exciting for us. I went back to Poland with David and Gerald Kurtz, and we purchased her!”

Perfirka, foaled in 2003, is an elegant grey daughter of Platinum World Champion Gazal Al Shaqab and comes from the same famous Polish dam line as both the earlier mentioned Pogrom and Prowizja. It is one of the oldest Polish foundation lines, tracing back to 1810 when Szamrajowka was foaled at Count W. Branicki’s Biala Cerkiew from desert bred stock.

This powerful “P” dam line emanates from Szamrajowka’s 8-times-great-granddaughter, Wlodarka, and her two Priboj daughters. The first one, Prowierka (1948), is the granddam of Prowizja, the source of park horse performance power, while the full-sister Piewica (1953) founded the world-famous “P” family at Janów through her Negatiw daughter, Pierzga. In turn, Pierzga produced several significant daughters, including the exquisite Pilarka, the greatgranddam to the beloved World Champion, Pianissima. Another daughter, Pipi, is granddam of World Champion, Pinga. Piewica’s 1983 Bandos daughter, Polish National Champion, Pentoda, is the dam of U.S. National Champion Mare, Penicylina. Pentoda is also the dam of Pogrom’s great-granddam Pestka, and Pentoza, the granddam of Perfirka.

Perfirka was imported to America and made her first show appearance at the 2015 Arabian National Breeder Finals (ANBF), where she won the Senior Champion Mare title. After winning the mature mare class at Scottsdale the following February, Perfirka went home to Cedar Ridge Farm, where she foaled a son by Ekstern, Pharaoh CRF. When October rolled around, Perfirka was in fine form and returned to competition to capture the 2016 United States National

Champion Mare AAOTH title with Lara Ames on the lead. It was a very satisfying experience, and a validation for the Polish breeders, who were thrilled with Perfirka’s success.

As she aged, the Ames family began to dream of acquiring Perfirka’s World Silver Champion daughter Perfinka. The latter is by the heavily decorated Polish National Champion Stallion, Esparto, to add to her dam’s legacy in their program. Lollie Ames recalls, “Dick wanted a daughter of Perfirka and told David to get going on it and find him one!” David Boggs was happy to help. “I knew the Ames loved so dearly, Perfirka, and I had heard about Perfinka. I talked to Dick about her, and he grabbed hold of it right away. Dick thought it would be exciting and thrilling. He turned me loose to see what kind of business arrangement we could make with Poland, so I did just that. There was a lot of negotiating back and forth; it was not an easy undertaking to lease such a mare.”

When the agreement was first signed, Perfinka was heavily in foal, and she stayed in Poland until they weaned the resulting filly. Boggs continues, “Dick was excited. He would ask about that mare every day, ‘When is she coming? When’s she coming?’” As Lollie Ames picks up the story, it turns bittersweet, “Dick said to David, when is that mare coming? I’d like to see her before I die. Now, we all make statements like that sometimes, but he did indeed pass away a few days before she arrived, so he never got to see her.”

“The lease of Perfinka was the last horse transaction my dad did before he passed away,” Lara adds. “The whole deal was dedicated to my dad. There were some special moments as she won the only three shows that she competed in [ABWC, ANBF, U.S. Nationals]. We’re parting ways with her in August because the lease is over. She is selling in the Polish auction, and we are sad about that, but we look forward to welcoming her 2020 grey filly by the immortal Padron via the miracle of embryo transfer. Perfinka came into our lives at a special time and gave us such happiness

when we had bad days. And I feel like America fell in love with her, just like we did.”

Boggs couldn’t wait to present Perfinka to her public. “She was relatively unknown by the American people other than those who travel abroad, which aren’t many these days,” he says. “Her first exposure to the eyes of judges, breeders, and the American public was the Las Vegas show. She blew people right off their chairs. Wow! She was amazing with her power and with her character.” The judges agreed, and Perfinka was named the ABWC Gold Supreme Champion Senior Mare.

“Perfinka is probably the most beautiful horse I have ever laid eyes on,” Lollie avers. “Everything has faults: horses have faults, dogs have faults, human beings

have faults. But I don’t know if you can find anything to fault on this mare. And I thought her mother was a pretty mare! Perfinka’s got that neck, a beautiful head, big eyes, and she’ll trot all day long. You just kind of melt when you look at her. And she’s much friendlier than her mother. She loves people, especially kids. She loves to eat carrots out of their hands. And she loves to show. You stand her up, and you don’t even have to do anything. She seems to say, ‘Oh! I’ve got to show now! Everybody, look at me!’ She has quite a following; it’s unreal.”

Both Lollie and Boggs point out an unusual characteristic of Perfinka’s, which has helped to endear her to the larger community and her growing fan base. “When she gets to the winner’s circle, she looks up as if she’s looking to the heavens and starts whinnying!” laughs Boggs. “And not just once—two, or three, or four times! As if she’s announcing or calling out, or she’s talking to Dick up there! You can see in some of the win photos that her eyes are looking straight up.”

At Perfinka’s next stop, the Arabian National Breeder Finals, she claimed the champion mare title before heading to Tulsa and her shot at U.S. National Champion Mare honors. Like an unstoppable force, Boggs and Perfinka swept to the championship by unanimous decision of the judges.

“Perfinka is a rare, honest horse who surely is as beautiful out in the pasture, let-down and dirty, as she is clipped up, in show condition, and presenting in the show ring,” states Joe Polo. “As soon as she entered the ring, it was clear that she was a special horse and would likely end up near the top of my card. When she walked into the middle of the arena and we

had the opportunity to judge her from head to toe, I was taken and felt honored to judge her. Her honest conformation, overall classic Arabian type, and intangible, sexy, feminine presence was undeniable.”

It is important to note that Perfinka was not the only offspring of Perfirka to win a United States national championship in 2019. Pharaoh CRF garnered the U.S. National Champion Stallion AAOTH honors, took home a Top Ten Junior Stallion award as well, and earned Perfirka additional nods as a sensational producer.

With the wins achieved in Las Vegas and Tulsa, there was just one more victory needed to complete Perfinka’s Halter Triple Crown—Scottsdale Champion Mare. Judge Christine Ryan is pleased to articulate why she gave Perfinka the 2020 win: “What truly stands out when Perfinka enters the ring is her presence. The championship lineup was stunning—one beautiful, correct mare after another. That presence is what pushed Perfinka to the top of my card. She simply owned the ring.”

Fellow judge Donnie Bullock agrees. “Perfinka has so many excellent qualities. She possesses such perfect symmetry and correctness with pure natural beauty and superior Arabian type in all categories. Just absolute beauty. It was an honor and privilege to judge such superior mares in the same ring at the same time, and Perfinka being named unanimous Scottsdale Champion Mare made it even more special.”

The Cedar Ridge/Midwest/Poland relationship has been a win-win-win situation thus far, where all have flourished. Friendships have been forged, championships have been earned, values have been enhanced, and great joy has been spread. With such documented success, there is every expectation that all three entities will look forward to additional collaborations as they perfect their partnership in the future.■