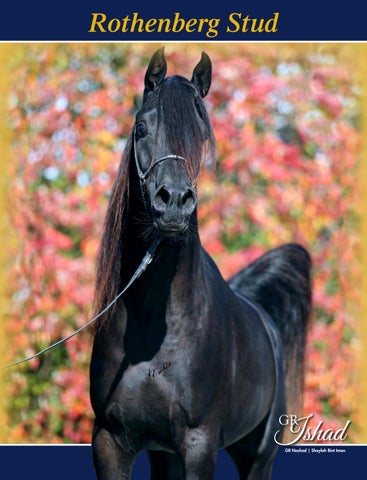 Rothenberg “Do what you love to do with all your heart and force … and never give up!” Emotional and inspiring talk with Annette Escher, the woman who keep fulfilling her dreams and reach the success no matter what comes the way. by Urszula Łęczycka photos by Annette &amp; Erwin Escher

Urszula Łęczycka: Your farm has been established 30 years ago by you and your husband Erwin. Nowadays you run it all by yourself and Straight Egyptian horses with GR prefix are worldwide known. You also run one of the largest Straight Egyptian black coloured herds in the world – that is in high demand nowadays. Can you tell us more about the idea of establishing your breeding program? Was it the same from the beginning or it has been changing through the years and following the market? What were your first horses and where did you get them from? Annette Escher: We started our Straight Egyptian breeding with a small number of horses several years before we could buy the right place and built “Rothenberg Stud” in 1991. In 1992 the stud and pastures was ready and we moved

our horses to here … from this time, having place enough, we were looking for the right additions and after we haven’t found most of them in Europe (there was only few Egyptians in Germany / Europe at this time and nearly nothing for sale) we went several times to USA looking at studs and horses driving thousands of miles weekly. During this time we found and bought the foundation horses for my recent breeding, so the mares like: Halims Asmara (Ansata Halim Shah x Lancers Asmara- US National Top Ten and twice World Res. Champion mare), Dalima Shah (Ansata Halim Shah x AK Bint Dalia II), Ansata Aya Maria (Ansata Shah Zaman x Ansata Aya Halima by Ansata Ibn Halima) – Bukra line and the black mare Maria Halima (Haziz Halim x Chelsea), Then the black mare Fasinah (Nahaman x Fatima) we found in Germany a bit later and before 1992 we already have owned the GR Aliyah (GR Faleeh x GR Anastacia by Classic Shadwan) first black out of Halims Asmara line

mare Samara (Ibn Moheba x Safiniya by Ibn Galal), I still own her granddaughter GR Safiniya and her black great-granddaughter GR Samantha! Over the years we sometimes leased a mare or made breeding-cooperation to add foals out of interesting mothers and motherlines – this way we bred GR Nashidah (by Classic Shadwan) which is the mother of black gold-premium stallion GR Nashad (exp. Kuwait, by GR Faleeh) and our young mare GR Layla (by GR Faleeh). After we moved to Rothenberg Stud we also bought our foundation-stallions: Classic Shadwan (Alidaar x Shagia Bint Shadwan) imported from Egypt, we found him in France, he was four years old at this time, Madallan-Madheen - when we heard about a GR Faleeh (Madallan-Madheen x Fasinah) &amp; Annette 25-09-17, the day before GR Faleeh left to Kuwait

very special black colt being born 1994 out of special bloodlines we quickly went to see him, and we bought him in age of 6 weeks! He was the very first foundation for our black breeding! Madallan-Madheen was not bred to get black, his parents were chestnut (Ansata El Salaam) and bay (the famous Madinah, mother of Imperial Madheen) but he got black “by accident” and was just bred to be a great horse … and got a rare gold ribbon from the German registry later at the licensing show! Most of our early blacks were out of non black lines … blacks were seldom and good blacks even more and usually they were impossible to buy! Since I was a child I always was a big fan of black horses but Erwin mostly GR Bint Asmara (GR Moneef x GR Asmara by GR Lahab) 13.9.16 - 4 months after Erwins death

loved the greys - in the end we love all colors so we only had a few blacks in the first years. Over the years we got more and more black foals (also Classic Shadwan produced fantastic blacks) and after 30 years I have managed to get great blacks from all our foundation-horses … for several I needed generations but meanwhile I have a fantastic group of black and black producing broodmares, many are already 4th and 5th generation of our foundation-mares! But color was not most important all the time – we both loved pretty exotic faces, good (proven) Straight Egyptian pedigrees and as we also were riders since the beginning we wanted to have a solid horse with good body, legs and movements which are able to carry us

Rothenberg Stud over the fields! The goal was not to lose any of this points over the years … type, body, movement … and most important at all the fantastic, people loving sweet character the Egyptians are famous for. UŁ: Straight Egyptian breeding is one of most difficult ones as you must use a very limited gene pool that creates some problems in avoiding inbreeding and breeding overall harmonius and typey horse. Limiting the Straight Egyptian breeding to black colour group only must be even more challenging. How do you find your way to keep breeding beautiful and correct horses with such a limited requirements? AE: Most of our foundation horses were not bred to get black which means they had a bigger gene-pool as if we would bought mostly blacks in the beginning … there were only very few black and black producing lines at this time which already often were inbred. And over the years we always were open to use sometimes outside stallions doesn’t matter the color like World Champion Al Lahab if we thought they would bring us something new in blood and look … in my recent herd GR Mahidah black filly 2022 (GR Ishad x GR Maheeba) - Moniet El Nefous line - the future

I have some great black mares and fillies from this line! We always used the Straight Egyptian bloodlines we liked personally not looking for trends and what other breeders prefer … we went our own way for our own taste and what we loved ourselves!

Event Europe. Also our first homebred black mares GR Marietta and GR Marianah (both Madallan-Madheen x Maria Halima) won several championships which was very special at this time as nearly no blacks was shown successfully! Also later our black stallion GR Faleeh (exported to Kuwait; Madallan-Madheen x Fasinah) was shown successfully … and many more. We sold our foals nearly all over the world and many of them won a lot for their new owners– many champion titles in halter classes as well as endurance races or riding classes. Our sold horses live around the world as breedinghorses and produce fantastic foals for their new owners … or are just best friends and great riding-horses to give their new owners fun and happy hours. We also bred several gold premium stallions at the stallion registration of the registry, for me one of the most difficult gold to get at all!

UŁ: Did you manage to combine your goals of having the bloodlines, the strenght, stamina and also the colour and then keep into the fashion to win the show titles? It had to be extremely difficult task.. AE: Over the years we often showed our horses and many of our foundation horses and their offspring got Multi-Champions and gold premium stallions. For example Dalima Shah and her daughter Shadwanah (by Classic Shadwan) as well as Halims Asmara and her son GR Amaretto (by Classic Sahdwan) won among other titles the champion titles at the Egyptian

Halims Asmara by Ansata Halim Shah Multi-Champion mare, one of our foundation mares

UŁ: There is probably no Arabian horse lover in Europe that would not know the photos made by your husband Erwin who passed away 6 years ago. Since that time you keep running the farm by your own with just one helper. Your strenght, passion and achievements could be an inspiration for many woman or girls who dream or run the horse breeding on their own for different reasons. It must be hard, emotional but probably also satisfying when you manage to breed a great horse at the end? What would you say and advice to the other woman – breeders? AE: Yes, the death of Erwin for sure was the most terrible time in my life, I thought my life have stopped, too. But the horses helped me a lot because giving up is no solution, you have to go on day by day, they wait for you, they need you! Additionally, Erwins second favorite mare GR Asmara (GR Lahab x Halims’s Asmara) died a few

UŁ: Did you manage to establish some dam and sire lines of your own that you admire until that day and continue? AE: All of my recent breeding-horses come in direct line from our early foundation horses – and all of them carry either the blood of Classic Shadwan or MadallanMadheen or both of them! Over the years I managed to breed fantastic blacks from all of the foundation-mares which made me very happy and proud and I love to see that the sold ones make their new owners happy, too.

days after him because of problems after giving birth and let her newborn filly GR Bint Asmara (by GR Moneef ) alone with me. This baby nearly died as well because of substitute milk so I needed to take milk from other mares to feed this baby … you can imagine that I nearly had no time to sleep over months which was very hard but maybe also good for me in this situation. My only aim was that we both need to survive …and we did! This year GR Bint Asmara gave birth to her first foal herself, the wonderful black filly GR Aseela by GR Ishad … and this made me very happy!

future. Like my fantastic happy day yesterday when my homebred 3 year old homozygous black stallion GR Fasin (by Maheeb by Classic Shadwan), the much too early born last foal out of our foundationmare Fasinah (which nearly died several time during the first weeks of his life) got a gold ribbon from the German registry as breeding-stallion with just amazing high scores in all points. I already got his first foal this year, a wonderful blackbay filly out of Erwins favorite mare GR Nashidah (by Classic Shadwan) and look forward for his next babies in 2023.

My advice is: do what you love to do with all your heart and force … and never give up!

UŁ: What an amazing story and the best proof to your words of advice that I would certainly put as a title of this interview! I wish you all the best of luck on reaching your future goals and of course – with mostly those great and happy moments for every breeder.

Designed and printed by Tutto Arabi