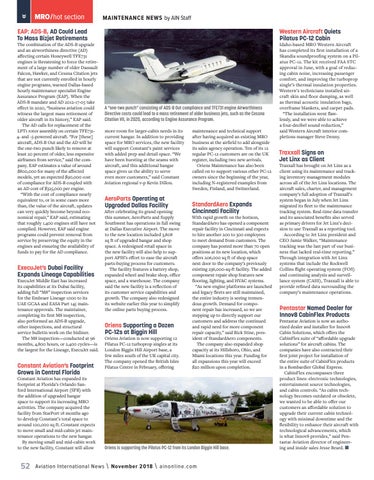 The combination of the ADS-B upgrade and an airworthiness directive (AD) affecting certain Honeywell TFE731 engines is threatening to force the retirement of a large number of older Dassault Falcon, Hawker, and Cessna Citation jets that are not currently enrolled in hourly engine programs, warned Dallas-based hourly maintenance specialist Engine Assurance Program (EAP). When the ADS-B mandate and AD 2012-17-05 take effect in 2020, “business aviation could witness the largest mass retirement of older aircraft in its history,” EAP said. The AD calls for replacement of the LPT1 rotor assembly on certain TFE7314- and -5-powered aircraft. “For [these] aircraft, ADS-B Out and the AD will be the one-two punch likely to remove at least 20 percent of older, less expensive airframes from service,” said the company. EAP estimates a value of around $800,000 for many of the affected models, yet an expected $90,000 cost of compliance for ADS-B coupled with an AD cost of $325,000 per engine. “With the cost of compliance nearly equivalent to, or in some cases more than, the value of the aircraft, updates can very quickly become beyond economical repair,” EAP said, estimating that roughly 1,400 engines still have not complied. However, EAP said engine programs could prevent removal from service by preserving the equity in the engines and ensuring the availability of funds to pay for the AD compliance.

ExecuJet Middle East has increased its capabilities at its Dubai facility, adding full “M8” inspection services for the Embraer Lineage 1000 to its UAE GCAA and EASA Part 145 maintenance approvals. The maintainer, completing its first M8 inspection, also performed an ADS-B upgrade, other inspections, and structural service bulletin work on the bizliner. The M8 inspection—conducted at 96 months, 4,800 hours, or 2,400 cycles—is the largest for the Lineage, ExecuJet said.

Constant Aviation has expanded its footprint at Florida’s Orlando Sanford International Airport (SFB) with the addition of upgraded hangar space to support its increasing MRO activities. The company acquired the facility from StarPort 18 months ago to develop Constant’s total space to around 100,000 sq ft. Constant expects to move small and mid-cabin jet maintenance operations to the new hangar. By moving small and mid-cabin work to the new facility, Constant will allow

A “one-two punch” consisting of ADS-B Out compliance and TFE731 engine Airworthiness Directive costs could lead to a mass retirement of older business jets, such as the Cessna Citation VII, in 2020, according to Engine Assurance Program. more room for larger-cabin needs in its current hangar. In addition to providing space for MRO services, the new facility will support Constant’s paint services with added prep and detail space. “We have been bursting at the seams with aircraft, and this additional hangar space gives us the ability to serve even more customers,” said Constant Aviation regional v-p Kevin Dillon.

After celebrating its grand opening this summer, AeroParts and Supply Southwest has operations in full swing at Dallas Executive Airport. The move to the new location included 3,808 sq ft of upgraded hangar and shop space. A redesigned retail space in the new facility will also help to support APSS’s effort to ease the aircraft parts-buying process for customers. The facility features a battery shop, expanded wheel and brake shop, office space, and a warehouse. The company said the new facility is a reflection of its customer service capabilities and growth. The company also redesigned its website earlier this year to simplify the online parts buying process.

maintenance and technical support after having acquired an existing MRO business at the airfield to add alongside its sales agency operation. Ten of its 12 regular PC-12 customers are on the UK register, including two new arrivals. Oriens Maintenance has also been called on to support various other PC-12 owners since the beginning of the year, including N-registered examples from Sweden, Finland, and Switzerland.

With rapid growth on the horizon, StandardAero has opened a component repair facility in Cincinnati and expects to hire another 200 to 300 employees to meet demand from customers. The company has posted more than 70 open positions at its new location, which offers 206,000 sq ft of shop space next door to the company’s previously existing 236,000-sq-ft facility. The added component repair shop features new flooring, lighting, and HVAC systems. “As new engine platforms are launched and legacy fleets are still maintained, the entire industry is seeing tremendous growth. Demand for component repair has increased, so we are stepping up to directly support our customers and address the continued and rapid need for more component repair capacity,” said Rick Stine, president of StandardAero components. The company also expanded shop capacity at its Hillsboro, Ohio, and Miami locations this year. Funding for all expansions this year will exceed $20 million upon completion.

Oriens is supporting the Pilatus PC-12 from its London Biggin Hill base.

Traxxall has brought on Jet Linx as a client using its maintenance and tracking inventory management modules across all of the Jet Linx locations. The aircraft sales, charter, and management company’s full adoption of Traxxall’s system began in July when Jet Linx migrated its fleet to the maintenance tracking system. Real-time data transfer and its associated benefits also served as primary drivers for Jet Linx’s decision to use Traxxall as a reporting tool. According to Jet Linx president and CEO Jamie Walker, “Maintenance tracking was the last part of our business that lacked real-time reporting.” Through integration with Jet Linx systems that include the Rockwell Collins flight operating system (FOS) and continuing analysis and surveillance system (CASS), Traxxall is able to provide refined data surrounding the company’s maintenance operations.

Pentastar Aviation is now an authorized dealer and installer for Innov8 Cabin Solutions, which offers the CabinFlex suite of “affordable upgrade solutions” for aircraft cabins. The companies have also contracted their first joint project for installation of the entire suite of CabinFlex products in a Bombardier Global Express. CabinFlex encompasses three product lines: electronic technologies, entertainment source technologies, and cabin controls. “As cabin technology becomes outdated or obsolete, we wanted to be able to offer our customers an affordable solution to upgrade their current cabin technology with minimal downtime and the flexibility to enhance their aircraft with technological advancements, which is what Innov8 provides,” said Pentastar Aviation director of engineering and inside sales Jesse Beard. n